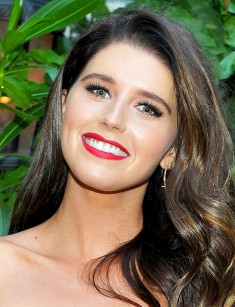 The daughter of legendary Arnold Schwarzenegger dispels the myth once again that nature has not endowed the children of outstanding people with great talents. Katherine Eunice Schwarzenegger, who is also a relative of Kennedy, is not going to live in the shadow of the famous father. She writes books, has a lifestyle blog and creates video podcasts for fashion magazines.

Katherine Schwarzenegger was born on December 13, 1989, in Los Angeles, California, USA. The girl was the first child of the famous actor and politician, Arnold Schwarzenegger, and journalist Maria Shriver (by the way, she is a relative of John F. Kennedy).

Katherine grew up in a large family, who had more and more children over the years. Her sister Christina was born in 1991, brother Patrick in 1993, and finally, brother Christopher in 1997. Besides, the woman has a half-brother named Joseph, whose mother is a housekeeper of the Schwarzenegger family, Mildred Patricia Baena.

Arnold hid the existence of an illegitimate son for a long time, and he told the world about his "mistakes" in 2011. The subsequent divorce from Maria Shriver did not affect the actor’s warm relations with children. Katherine wrote on Twitter that no matter how difficult it was, she would always love her father and family.

After graduation from college, she entered the Faculty of Public Relations and Journalism of the University of Southern California. She recalls with gratitude that her famous parents never put pressure on the children allowing them to decide what to do. They could make movies, write articles or do something else.

Therefore, her choice of the media sphere was free and conscious. However, after graduation, Katherine faced the problem that was familiar to many graduates. She did not know what to do next. So she got the idea for a future book.

Katherine’s first book "Rock What You've Got: Secrets to Loving Your Inner and Outer Beauty from Someone Who's Been There and Back" was published in 2010.

The woman shares personal experience and gives tips on how to accept yourself in a world where glossy magazines impose their opinion on readers from the standards of beauty to mindset. From the very beginning, Katherine also tells readers her biography.

At that moment Arnold Schwarzenegger’s daughter had many reasons to feel so bad. She turned into a stout teenager from a delicate, slender girl. Dissatisfaction with her body affected the mood and Katherine constantly compared herself with other girls, felt uncomfortable and could not concentrate on her studies. In the book, she goes into detail that helped her to overcome this difficult period, lose weight and love yourself.

Schwarzenegger has written several books. In 2011 the next work "I Just Graduated ... Now What? Honest Answers from Those Who Have Been There" was published. The woman addresses the issue that is important for a young generation. She writes what they should do after graduation from university.

Not only Katherine but also other celebrities share their experience. There are singer John Legend, tennis player Serena Williams, businesswoman Sara Blakely among them. The parents of the young writer also shared tips on how to build a successful career.

In 2017, Katherine published the first book for children. The story "Maverick and Me" was based on her childhood memories. At school, she was a member of a group who saved lost or abandoned dogs. Now Schwarzenegger is an ASPCA ambassador (American Society for the Prevention of Cruelty to Animals) and tries to tell people about the activity of these organizations and what their members do to help those who are going to have a pet.

The author prefers not to tell about her personal life. In 2015, the press made much ado about the photo of Katherine and Braison Cyrus, the brother of famous singer and actress Miley Cyrus. They wrote that Patrick Schwarzenegger introduced the young people. However, the rumors have not been confirmed.

In the summer of 2018, the paparazzi took pictures of Katherine together with American actor Chris Pratt. One year earlier, the star of the films Jurassic World and Guardians of the Galaxy divorced his wife, actress Anna Faris.

For several months, Chris and Katherine have repeatedly appeared together. They were alone or with Jack, the actor’s son from his first marriage. The couple has not made any official statement, but anonymous well-wishers periodically post information on the Internet, claiming that the lovers date and plan to marry in the future.

Especially for InStyle magazine, Katherine creates video podcasts, which are marked with #AskKat.

"I'm so glad that I film these videos, answer your questions and deepen my knowledge about cosmetics, healthy diet, healthy hair - in short, all that concerns the style and way of life" - the writer said in the first video message to readers. 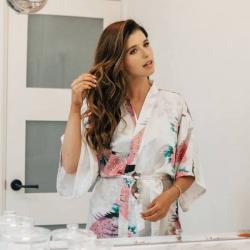