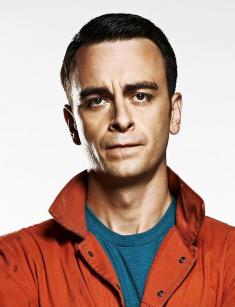 Joseph William Gilgun is an English actor known for several roles in Emmerdale, This Is England and Misfits. He also appears as the main character in the television adaptation of the Vertigo comic Preacher.

Joseph Gilgun was born and raised in Chorley, Lancashire, to Judith and Andrew Gilguns. He was the first-born child in the family, and then his two younger sisters were coming along, Jennie and Rosie.

When the boy went to primary school, the educational psychologist diagnosed that Joseph had the hyperkinetic syndrome and ADHD. The next examinations revealed that Gilgun also suffered from dyslexia; the actor can hardly write and read. But thanks to the advice, given by psychologists, he started acting in drama school to cure his affliction.

That’s why the boy attended Rivington VA Primary School and Southlands High School and trained at the Laine Johnson Theatre School at the same time. Joseph was fond of drama lessons, and his teachers found him talented for his early age. After four years the teenager debuted in his first feature movie, but Gilgan didn’t consider the future profession with acting at that time.

After receiving HSD, Joseph Gilgun studied art at Runshaw College where he started a degree in fashion design. But this work didn't like him and seemed to Joseph too academic. As a result, he gave up on it and began to work a plasterer. Joseph was making even the walls of houses for several years until returning to acting a primary role with longest-running TV serial.

As a child actor, Gilgun made his television debut from a famous British soap opera Coronation Street until he became 14 years old. He gave up the work of builder because of the first significant role in long-running soap opera Emmerdale. Firstly, the actor was glad to be a part of something big, this serial was on TV for 34 years and had a huge success. But then, Gilgun noted that he couldn't develop as a professional actor because he played only the same character.

Misfits was a cult-favorite serial. It had different headings in Russia, for example, "The bad ones" and "Losers." It’s a mockery serial about commonly popular superheroes’ stories. Supernatural powers are given not to the moral characters which needed to save the world, but to five of young offenders sentenced to work in a community service program. These special abilities showed and reflected the main personality traits of the characters and only made their life more complicated.

Honestly, Joseph started to cast in this serial from the 3d season as Rudy Wade who had emotionally induced multiplication (the ability to split into multiple personalities). Some fans of the series liked the way Joseph played, so they even didn’t mention the left of Robert Sheehan, the favorite actor in this series. According to the plot, his character moved to Los Angeles in the hope to use his superpowers in order to get rich.

Changing characters in the 3d season was successful. Because of the narrative changes, the audience could show old characters who acquired new powers and started to adapt and get used to them.

In 2015 the actor played a small role in a global blockbuster. It was a dark fantasy action movie The Last Witch Hunter where starring Vin Diesel, Rose Leslie and Elijah Wood. The movie was set in the world looking like real, but with witches, magicians and other fairy-tale creatures, hiding from people’s eyes.

The main character was a witch hunter who had an old spell, so he already lived for eight centuries. During that time, humans and witches kept the truce, and mystic creatures look seamless in the world of technology.

Joseph Gilgun suffers from many complexes which rooted in his childhood. He thinks that dyslexia is like a “biggest pain in his life," so he hardly communicates with other people. He has only several friends, but the actor trusts them fully.

The relationships with women also are complicated for Gilgun. He doesn't believe in close relationships between him and a girl, so many of his affairs failed. Although, he dated Vicky McClure of This Is England for a long time.

Gilgun loves tattoos. He has many pictures and written messages on his body which means something important and dedicates to his curtain period of life.

Not long ago Joseph earned the role in the series Preacher where also casted Dominic Cooper and Ruth Negga.

The series premiered on May 22, 2016. The first season had high ratings, so on June 29, 2016 AMC officially renewed for season two. The third season, which was released only in summer 2017, also had many positive reactions.

The Preacher became so popular series, loved by the audience, due to the starring actors and scandalous plot, based on the popular cult comic book of Vertigo which itself is not so familiar to the general public. But the Vertigo is an imprint of the American comic book publisher DC Comics.

The main character of the series is a preacher from Texas, Dominic Cooper who embarks on a quest to understand his new gift better, and literally and physically finds God. The character as Joseph Gilgun who joins the preacher in his adventure and becomes the best friend. They don’t bother that one is a priest, and the other one is a vampire with alcohol addiction. Of course, the plot has grim humor, the references to the religious texts and individual views on bible scenes.

Because of the religious themes in comics, the series couldn’t be released on TV, as it was with the previous attempts to adapt the plot in 1998 and 2006.

Acting in TV series, The Gilgun also played a secondary part of Dominic in a crime drama The Infiltrator, released in 2016. This movie is about Customs Service special agent whose new mission is to infiltrate the crime syndicate of Pablo Escobar, the Columbian drug lord and the most dangerous criminal in the world. The movie isn’t fully documental, but there are some real facts from the biography of the criminal which you can watch in the movie.