Dominic Cooper is an English actor who became famous for the films Mamma Mia! and The Duchess, and consolidated his success after the release of the movie The Devil's Double, Dracula Untold and Warcraft.

Cooper was born in Greenwich, the eastern part of the capital of the UK. Dominic's parents had nothing to do with creative work. Mother Julie Heron worked as a kindergarten teacher, and his father Brian Cooper was a high-class auctioneer. But the actor had a famous maternal great-grandfather, Edward Thomas Heron, who was a pioneering English film enthusiast and published his own weekly newspaper devoted to "the most important art."

Dominic Cooper attended Thomas Tallis School and then went to study acting at the London Academy of Music and Dramatic Art, where another famous British actor Benedict Cumberbatch also studied. The young man began his career with commercials. Cooper shot in the banned advertising for Durex condoms.

At the same time, Cooper tried to make it into both the cinema and theatre. In 2001, the actor joined the National Theater in London and toured with the troupe around the world. The most famous play in which Dominic appeared is considered to be The History Boys. The production was later filmed, and a radio version was also created.

Dominic Cooper began his acting career in 2001 with a bit part in the mystical thriller From Hell with Johnny Depp and Heather Graham in the leading roles. It was soon followed by a similar role. Cooper earned rating playing bit parts in British television projects and soap operas. One of the top-rated films was Band of Brothers.

In 2003, the musical comedy I'll Be There was shot, and it was followed by the action movie Boudica. The actor’s career finally improved after another supporting role, which the actor got in Neil Jordan's comedy Breakfast on Pluto.

In 2006, Cooper participated in the film adaptation of the play The History Boys, and also starred in the romantic comedy Starter for 10, for which he won the Screen Actors Guild Award and was named the Best Male Newcomer.

Dominic attracted even more attention after playing with Colin Firth and Meryl Streep in the musical Mamma Mia!, and with Keira Knightley and Ralph Fiennes in the biographical drama The Duchess. In 2009, the melodrama An Education was released, in which Cooper played a secondary character. The British actor played Danny in the film. Orlando Bloom was initially supposed to portray this hero, but he suspended the contract for some unknown reason.

At the same time, director Lee Tamahori from New Zealand saw British actor as the main character of the drama action movie The Devil's Double. The action takes place in Iraq. Uday, the son of Saddam Hussein, needed a body double for the cover. Intelligence agencies choose a young man, Latif, and force him to cooperate. Latif has to kill Uday to get freedom. It is interesting that Dominic portrayed two main characters, which was a new step in the development of acting skills.

The British actor is not afraid of experiments, but he chooses winning projects. In 2012, Cooper starred in Kazakh-Russian director Timur Bekmambetov’s fantasy thriller Abraham Lincoln: Vampire Hunter, where he portrayed a good vampire. The producer of the project was Tim Burton. Since the protagonist of the story was Abraham Lincoln (Benjamin Walker), the film premiered on an aircraft carrier named after the US president. The movie grossed an impressive amount of $112 million at the box office.

Over the last years, the actor has played the leading roles or portrayed important characters in top-grossing films. So, Cooper played the title characters in the melodrama Summer in February, in the biographical drama Fleming: The Man Who Would Be Bond about the creator of James Bond, in the action television series The Preacher, in the thriller Stratton. Dominic Cooper has also included in his filmography two films - the mystical film Dracula Untold and the fantasy film Warcraft.

In 2015, the actor participated in the shooting of the drama Miss You Already about two friends who were close since childhood, but they have to test the strength of their friendship after one of the women finds out about cancer. Drew Barrymore and Toni Collette played the title characters. Dominic Cooper appeared as a boyfriend of one of them.

Dominic Cooper romantic relationship was not easy. The actor had already a long relationship with a girl when he met actress Amanda Seyfried, with whom he played in the film Mamma Mia!. The young people started a love affair, although they both were not free. After a while, there was even information about their engagement, but the wedding did not happen.

Two years later, Cooper met actress of Ethiopian descent, Ruth Negga. The young people played together on the stage of the National Theater in London. Dominic was torn between feelings for Amanda and love for Ruth. The actor periodically resumed relations with one girl, then with the other. But distance cleared the air. Amanda Seyfried lived far away in another country. Cooper returned to Ruth Negga and is still dating the girl.

Actor James Corden is considered to be a close friend of Dominic Cooper. The actors even rented one apartment for a long time, until the latter married. Dominic Cooper is trying to show his personality in everything. On his Instagram page the actor posts unique photos, sometimes they are even amusing. The heroes of his posts are his friends, himself, but Cooper more often takes pictures of passers-by.

British actor openly expresses a social stance. For example, in 2014, the actor did not hide the negative attitude toward the issue of Scotland’s independence and even signed a petition among a group of well-known public figures to ban the referendum.

Dominic Cooper does not consider himself a workaholic, and the actor does not chase fame and big money. Cooper has 2 or 3 exciting projects per year. In 2016, the actor participated in the filming of the second season of Agent Carter.

In the series Preacher, Cooper played the leading role of priest Jesse Custer, who has two beings, the angel and the demon, inside him. Ruth Negga and Joseph Gilgun played the fantastic creatures. Thanks to the positive reviews and high rating of the series, they decided to renew it for the second season.

Nowadays the latest movie with the actor is considered the drama The Escape, but the second part of the musical film Mamma Mia! is scheduled to be released in 2018. 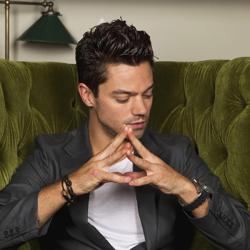