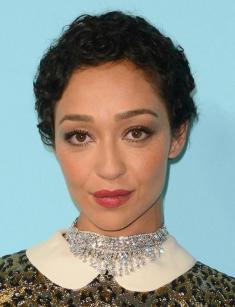 The "alien" appearance of this actress, coupled with a brilliant talent literally fascinate the viewers watching her play. The first step on the path to glory for Ruth Negga was the role of Charlie in the film by Irish director Neil Jordan, Breakfast on Pluto.

Then started her career on television, which resulted in worldwide popularity thanks to the television series of the Marvel film universe, Agents of S. H. I. E. L. D. And finally, in 2016, Ruth took the first step to the cherished Oscar award, being nominated for Best Actress for her work on the biographical romantic drama film Loving.

Ruth Negga was born on January 7, 1982, in Addis Ababa, Ethiopia. Her mother, Norra, Irish by nationality, met her future Ethiopian husband, Dr. Negga when she was working as a nurse in the capital of Ethiopia. Soon the couple had a daughter Ruth.

"Ethiopia is an extraordinary country, extraordinarily beautiful. My mother certainly was among many people who have fallen in love with Ethiopia."

When the girl was four years old, her mother took her to Ireland because of the unstable political situation in the country. Her father was to follow them after some time, but in three years he died in a car accident. It was difficult for Ruth's mother to cope with this loss; she never married again and decided to devote herself wholly to raising her daughter.

Ruth spent her childhood in Limerick, a city in County Limerick, Ireland together with many cousins. After graduating from high school, she studied at the Samuel Beckett Center at Trinity College, Dublin, which previously had been alma mater of the famous Irish playwright, Samuel Beckett. After graduating with a BA in Acting Studies, the twenty-year-old girl moved to London, where she perfected her skill, conquering the theatrical stage. Among the outstanding dramatic works of Negga are Shakespeare's Ophelia (from the play Hamlet) performed at the The Royal National Theater.

The actress admitted that despite growing up in a completely non-aggressive environment, from an early age, she felt some kind of isolation.

"My feelings of difference were partly down to having parents of different races. I had quite a scattered childhood. I was Irish in London because I had my secondary school education there. I never really fit anywhere. I didn’t feel it was a negative thing and I was never made to feel different, I just knew I was," - opened up the actress to The Guardian.

Perhaps it was this sense of difference that inspired her to portray vivid characters. Sometimes they are strange people living in a world of their dreams, and sometimes they are outright marginals. After her debut in the movie Capital Letters in 2004 (the role of Taiwo), Ruth Negga played in the film by Irish director Neil Jordan, Breakfast on Pluto, together with Cillian Murphy.

And Jordan specifically changed the script to introduce a role for Ruth, whose acting impressed him incredibly. The character of Charlie, a pregnant Irish terrorist girl, brought the aspiring actress nomination for the Irish Film and Television Academy Award (IFTA) for Best Supporting Actress.

In the same year, the actress made her debut in the horror genre, starring in the film Isolation about the terrible consequences of a genetic experiment on livestock on an abandoned farm in Ireland. The Franco-British comedy-drama film Color Me Kubrick was another essential step in the acting career of the young girl. Her part in the movie was quite small, but she got to work on the set together with John Malkovich himself!

2008-2009 for Ruth were marked by fruitful work on television. Ruth starred in the British television drama series Criminal Justice for a year, after which she played a significant role in the drama-comedy series, Personal Affairs. The series tells the story of the lives of six close friends, employed as personal assistants of big bosses.

However, the most controversial work of the actress of this period was the series Misfits (2010), presented in a mixture of drama, comedy and science fiction genres. The plot revolves around a group of young offenders who are sentenced to community service.

Once hit by lightning, they turn into real-life superheroes, their abilities become endless. Ruth Negga's character, Nikki, a girl who got the gift of teleportation, lasted in the project for six seasons. And the actress earned a nomination for the IFTA Award.

A new project that the talented actress took was a biographical television film about the British singer Shirley Bassey, who got worldwide fame because of her soundtracks for the James Bond movies (Goldfinger, Diamonds Are Forever, Moonraker and others). For the role of the famous singer, Negga received her first IFTA Award.

2013 is the year that stands out in the work of the actress. First of all, it was marked by a large number of projects released with the participation of the young girl. Ruth Negga was noted for a small role of WHO doctor in the apocalyptic action horror film World War Z; Brad Pitt produced the movie as well as playing the central part in it.

Also, together with Pitt Ruth works again on the set of the film 12 Years a Slave, which received three Academy Awards, including Best Picture, as well as the British Academy Film Award and a Golden Globe. This year was also marked by success on television. Negga began acting in the popular American television series about superheroes, Agents of S. H. I. E. L. D. Ruth's character is a former agent of HYDRA, who belongs to the race of Inhumans, and is engaged in scientific experiments.

After three seasons in Agents of Shield, the actress joins another project, Preacher (2016), also based on a comic book of the same name. In the center of the plot are the Texas preacher Jesse Custer (Dominic Cooper), his ex-girlfriend Tulip O'Hare(Ruth Negga) and his best friend, vampire drunk Cassidy (Joseph Gilgun), traveling in search of God.

"My character Tulip O’Hare is a breath of brilliantly strange, fresh air. She’s a unique, original character and I think there are not many people like that on screen. It’s a privilege to play her," - this is what the actress thinks about her role.

The beginning of the filming of Preacher for Ruth coincided with the release of the fantasy thriller, film Warcraft, on the big screen, in the movie Negga played Queen Taria. The commercially successful project, which grossed more than $4 million in the world, brought the actors incredible popularity. But in the same year, even more significant success awaited the actress: Ruth Negga received a nomination for an Oscar for her role in the British-American drama film, Loving.

The actress really put something more profound than just acting talent in her character of Mildred Loving. In this work, her own memories of her parents' interracial marriage and personal feelings of growing up in a country where her appearance was considered exotic came to life.

The plot of the film, directed by Jeff Nichols, was based on real events that occurred in Virginia in 1958. Richard and Mildred Loving got married despite the state's official prohibition against interracial marriages. The lovers go through arrest, court, and prison to win the right to be together. And only in 1967 such marriages were legalized all over America.

"People need a couple like Richard and Mildred now; they need to know that change from a grassroots level is possible, that there is hope," - opened up Ruth Negga in one of the interviews.

In 2010, Ruth Negga in the course of work on the production of "Phaedra" met British actor Dominic Edward Cooper, the star of the musical Mamma Mia! and romantic drama film An Education.

The actors dated for eight years, carefully hiding their love life from the public, only sometimes appearing together in movies and TV projects (Warcraft, Preacher). There were rumors that Dominic Cooper would soon become Ruth Negga's husband. However, their fans were very sad to learn about the breakup of the couple in April 2018.

The only consolation was that Ruth and Dominic parted as good friends and the next summer they already posed for photographers together at the premiere of the third season of Preacher. The actress was also said to have a "Loving" affair with her colleague Joel Edgerton, but the actors did not confirm these rumors.

Petite Ruth Negga who is 5 feet 24 inches tall, in addition to movies and TV shows, and theater, is engaged in the fashion industry and often participates in photo shoots for famous fashion houses and magazines, such as Vogue. Ruth Negga made a resounding success with her sexy Oscars dress at 89th Academy Awards ceremony. Negga also wore ACLU blue ribbon on the red carpet at the event. Besides, Ruth Negga stunned everyone on the Met Gala red carpet, wearing a white dress like an angel.

Ruth Negga is not active on social media, and fans find out the latest news from the fan accounts on Instagram, where her admirers hope to see hot photos of the actress in bikini.

Ruth Negga has a net worth of $4 million. In 2019, the science fiction drama film Ad Astra, starring Ruth Negga is going to be released. Brad Pitt and Tommy Lee Jones played the leading roles in the movie about the journey through the Solar system Tommy Lee Jones.

Also, an essential place in the creative career of the Irish actress is now occupied by the theater. On September 27, 2018, the premiere of the play Hamlet starring Ruth took place at the Gate Theater, in the heart of Dublin City.