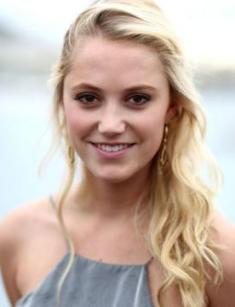 Maika Monroe is an American kiteboarder who won second place in the Red Bull Big Air International Tournament (Dominican Republic). She is a movie actress who received the title of Queen of Horror and is famous for her work in Labor Day, It Follows, The Guest.

The future actress Dillon Monroe Buckley was born in May 1993 in Santa Barbara, California. Later she changed her name and became Maika Monroe.

No one in Maika Monroe's family is connected to the world of art. Her father is a builder by profession, her mother is a sign language interpreter, and she teaches at a school for deaf-mute children.

The girl had a happy childhood. One could say that there love and harmony reigned in the family. The father instilled in his daughter a love of kiteboarding. The girl started doing this sport when she was 11. And at 13, she went with her father to Puerto Rico for the first kiteboarding tour. Looking ahead, let's say that Maika Monroe has achieved significant results in this exciting and beautiful sport. In 2013, she took 32nd place in the world ranking of freestyle kiteboarders.

As a child, she dreamed of several professions. First, Maika wanted to be a veterinarian because she loved animals. Then came the desire to try her hand at paramedicine, which changed the keen interest in graphic design. In addition to kiteboarding, Maika was engaged in dancing and was happy to participate in school theatrical performances. In the 5th grade, the young actress played Jack Sparrow in the play Pirates of the Caribbean.

But the real interest in the movie industry appeared when she turned 13. Someday agents from a film studio came to the dance studio Maika attended to. They were looking for someone to play the role of a girl-statistician in Bad Blood and chose Maika Monroe. The girl got unforgettable emotions seeing the shooting process from the inside. But she decided that it was impossible to become an actress.

She believed that a sports career was more realistic. For this purpose, 17-year-old Maika Monroe went to the Dominican Republic, to the city of Cabarete, where she began to prepare professionally for freestyle kiteboarding competitions. The training took all day, and the young athlete's efforts were soon crowned with success as the girl took the 2nd place in the Red Bull competition.

But Maika often remembered her minor role played at the age of 13. During her stay in the Dominican Republic, Monroe heard about the casting for the role of the protagonist's beloved in the movie At Any Price. Maika took a chance and sent her amateur video to the producers. Soon the young blond girl got the answer that she received the role. So, Maika began her acting career in 2012. The girl made her debut in the acclaimed melodrama, where she appeared in the lead role along with famous Zac Efron.

The first role brought Maika Monroe fame. And the appearance hand in hand with Efron on the red carpet of the Venice Film Festival attracted even more interest to the young actress.

In the spring of the same 2012, the aspiring actress signed a contract to participate in the dramatic movie called Labor Day, which was released in 2013. Maika got the role of Mandy, the wife of a fugitive prisoner, whom he had killed. Mandy comes to her killer in his dreams and memories. Kate Winslet and Josh Brolin starred in the drama.

2014 was a new success. Maika Monroe played a major role in the thriller The Guest, which a horror movie. The thriller that started shooting the same year was Echoes of War. The movie revealed the history of relations between the participant of the Civil War and his new neighbors. In the movie, Maika got a secondary role.

In 2016, fans of Maika Monroe's talent got the opportunity to see the actress in several projects at once. First of all, it is a sequel to a fantastic movie Independence Day: Resurgence about planet-wide developments designed to protect the Earth from space invasion. But the newest technologies become a toy in the hands of aliens, and then a team of enthusiasts stands up to protect the planet.

In the drama The 5th Wave, which is focused on the victory of human instincts over the voice of the mind after a major disaster and the arrival of aliens on Earth, the actress portrayed Ringer. The leading role was played by Chloë Grace Moretz, with whom Maika Monroe are friends in real life.

The actress and athlete is actively engaged in charity. The woman takes part in the Kiteboarding for Children charity project held in the Dominican Republic. It's a fundraiser for programs to improve the quality of life of local children who have become close to Maika after living in Cabarete. The actress regularly has charitable posts in her Instagram account.

Maika Monroe is a versatile person. In addition to sports and movie industry, she is interested in fashion and clothes design. Maika has developed her own line of youth clothing, tops, and T-shirts of the brand Airborne. The woman often takes part in photo shoots for glossy magazines such as The Interview, Hunger, The Wrap.

Maika Monroe is currently working on her personal life. The blond beauty is still not married, although she allegedly has an affair with Hollywood star Zac Efron, whom Monroe met on the set of the movie At Any Price. There were rumors about her dating Taylor Lautner.

Recently, the queen of horror movies is increasingly seen in the company of Joe Keery, musician, and actor, owner of the Screen Actors Guild Award for his role in the series Stranger Things. The lovers don't hide from paparazzi cameras, and Maika and Joe's photos often appear on the Internet.

In 2017, the actress appeared in the movie Mark Felt: The Man Who Brought Down the White House. It's a drama about an FBI employee who played an important role in the Watergate scandal. Maika got the role of Joan, daughter of the protagonist Mark Felt (played by Liam Neeson).

This was followed by the movies Bokeh, shot together with Irish moviemakers, and Hot Summer Nights about a summer in the teenager's life. The woman got the lead role in the detective western The Scent of Rain & Lightning. Monroe's character will have to deal with the case of her parents' death, and at the same time, feel the power of family ties.

In the drama The Tribes of Palos Verdes, the actress portrayed the protagonist named Medina, who is experiencing problems with her peers in the new school. To embody the cinematic image on the screen, the woman had to study the elements of surfing as Medina and her brother Jim were fond of this sport. Monroe has quickly mastered surfing as she is fluent in kiteboarding techniques.

Michelle Schumacher's drama I'm Not Here was released in 2017, and Maika Monroe again appeared in the main cast. The young actress also worked on the movie Greta, released in 2018. She starred opposite her friend and colleague Chloë Grace Moretz. The characters of the actresses have to face a seemingly friendly older woman, who is not the one she pretends to be.

Maika has a net worth of $1 million.