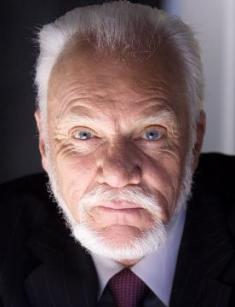 It happens that millions of fans around the world adore the actor, although he has become famous mainly for negative characters. Cult directors have invited him to their projects, and restrained critics sometimes could not but give generous praise. Even Russian filmmaker Karen Shakhnazarov highly appreciated the talent of English actor Malcolm McDowell.

The only son was born on June 13, 1943, in Horsforth (a suburb of Leeds), to Charles and Edna Taylor who decided to name him Malcolm John. The couple had the oldest daughter, Gloria, and later the youngest girl, Judy, was born. Soon the family moved to Bridlington, then to Liverpool, the "City of Music." By the way, according to the actor, he was lucky to meet the cult band The Beatles there.

The father wanted his child to study only in a private school, so the boy attended the Tunbridge Boarding School and the Cannock House School, where he began to dream of becoming an actor. Thus, young Malcolm exerted all his powers to fulfill his desire.

While studying in school, the boy worked in Planters nut factory, then he helped his father in his pub, and later mastered the profession of a coffee seller and sales representative. Later, the pub began to make less profit and went bankrupt, which worsened his father's alcohol abuse.

At the same time, the teenager was fond of racing cars. The boy did not distinguish himself with good behavior. Every Monday the teacher taped the floor with a stick or shoe to calm the wayward and disobedient student.

He entered the London Academy of Music and Dramatic Art, following the dream, and later secured work as an extra with the Royal Shakespeare Company. The man took his mother’s surname, McDowell, to avoid confusion with another actor and his namesake.

Malcolm made his acting debut in the film If.... which told about a savage insurrection at a British boarding school and won the Palme d'Or at the Cannes Film Festival. Lindsay Anderson also invited the talented actor to play in two sequels: O Lucky Man! and Britannia Hospital.

It was a brilliant portraying of rebel Mick in the first film that attracted the attention of Stanley Kubrick, who planned to film the novel A Clockwork Orange. Despite Burgess's disapproval, the movie was a huge success, receiving four Oscar nominations, three Golden Globe nominations, and seven BAFTA nominations. The path to recognition turned out to be quite thorny. Malcolm broke his ribs, met a hated reptile, damaged his eyes, and almost choked on water.

When the actor became famous, directors began to offer him only negative characters: Caligula, a serial murderer, and regicide in the film The Assassin of the Tsar directed by the Soviet filmmaker, Karen Shakhnazarov.

During the filming, Malcolm lived in a rented apartment in Moscow and earned $2 million. As for participation in Tinto Brass’s movie which is famous for its real sex scenes and banned in two countries, McDowell frankly stated:

During his long creative career, the actor portrayed a lot of historical personalities: King Arthur and his mentor Merlin, Herbert Wells, King Henry II, General Smyslovsky, and many others. He also played the devil twice in 2001 and 2011.

In 1982, the actor's filmography included the fantasy movie Cat People, in which he portrayed Nastassja Kinski’s brother. His credentials also have series (Fantasy Island, War and Peace, The Mentalist, Mozart in the Jungle, Franklin & Bash), comedies (Home Alone: The Holiday Heist, Some Kind of Beautiful). The actor has voiced computer games and even appeared in Slipknot’s music video.

On April 21, 1975, Margot Bennett and Malcolm McDowell got married after being together for several years. They had previously had a long distance relationship and worked in O Lucky Man!. When they celebrated the wedding, the young people had known each other for about six years.

However, three years later, the star of A Clockwork Orange felt in love with Mary Steenburgen on the set of Time After Time. After divorcing his first wife in 1980, he got engaged again. They lived together for ten years and had a daughter, Lilly Amanda (1981), and a son, Charlie (1983). The latter inherited the love for the cinema from his parents and became a director. According to media sources, Charlie is now dating Emilia Clarke.

In 1991, McDowell’s personal life improved. His third wife became the artist and interior designer, Kelley Kuhr. The man came to the personal exhibition of the woman by chance.

Despite the large age gap, the couple has built a harmonious relationship and raises three sons: Beckett Taylor (2004), Finnian Anderson (2006), and Seamus Hudson (2009), decorates the house in Los Angeles with antiques, increases the collection of miniature racing cars, and does not hide family happiness.

In 2012, the actor first became a grandfather. The only daughter gave birth to his granddaughter Clementine Mae.

In 2018, Malcolm was busy voicing the animated series We Bare Bears and Star Wars: Rebels, starred in the ninth episode of the third season of Chicago Med, as well as in Oceanus: Odyssey One.

The man appeared as Richard Strauss in Legacy of Fire, telling about the life of the composer in Nazi Germany, and the founder of the Fox News channel Rupert Murdoch in Fair and Balanced, featuring Hollywood beauties Charlize Theron, Nicole Kidman, and Margot Robbie.

McDowell is an active Twitter and Facebook user. The handsome actor (his height is 5.70 ft. (174 cm), and the weight is 182.98 lbs. (83 kg)) sometimes shares photos from his youth, backstage and private pictures, as well as the latest snapshots of birthday parties with friends, Easter and traveling. On social media, he also played the tribute to Stephen Hawking and Aretha Franklin following their death.

There are also pictures of Malcolm on the Instagram page of his son Charlie.

Malcolm McDowell has an estimated net worth of $70 million.