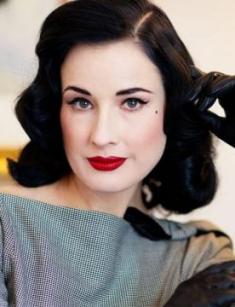 She shocks and charms; she looks like a top magazine cover girl and says her style has not changed in the last 20 years. Dita Von Teese does not collaborate with stylists and makeup artists and knows every detail of her tomorrow outfit. Famous designers, from Christian Louboutin and John Galliano to Jean Paul Gaultier, view her as their muse.

The celebrity was not born in a corset and porcelain skin – she is a self-made woman. Heather Renée Sweet was born on September 28, 1972, in Rochester. The girl’s mother worked as a nail artist, and the father was a machinist; she had two sisters.

Dita did not dream about acting or modeling; she only liked dancing and took up ballet early. 13-year-old Heather danced solo parties; according to the celebrity, she reached the peak of her abilities at 15.

Soon, the father changed his job, and the family moved to California. There were several unpleasant moments that Von Teese hates to remember. She used to be a humble girl and had to endure her classmates’ bullying: they beat and humiliated her. Heather cried and wanted to turn into a beauty, so that all boys would fall over heels in love with her, and girls would be green with jealousy.

At 14, Dita decided she was not going to tolerate that attitude and changed her style dramatically: lots of makeup and revealing clothes. The teenager could easily seduce boys with her long neck and shorts. Later, the celebrity said she was thankful to those who made her cry: they helped her find the true self.

At 15, Dita got hired in a pizza restaurant and, later, a lingerie store. The young woman spent her first money on cosmetics and clothes. After graduation, she entered a college and studied costume history. She began to dance at striptease clubs at 19 and included ballet elements into her program; Captain Cream was the first employer of the future star.

Work and studies were exhausting for Heather. She lost much weight at 20 and had the first surgery: breast augmentation. It was not the last time she did something to her body: the artist did not keep secret she turned herself into her ideal. The provocative mole on the woman’s cheek is also an imitation.

Dita changed her hair color and became a raven-head beauty with the retro-styled hair, like Lauren Bacall. A corset, black gloves, and lace lingerie were her favorite items of stage clothes. As the dancer told journalists, corsets helped her make her sizes perfect: it could reduce her waist from 56 to 42 cm. Dita’s height is 5.35 feet (163 cm.).

Heather used the retro style in the first shows, even though the 1990s striptease fashion prioritized the girl-next-door and cowboy styles.

The dancer took the pseudonym in a year after she started her club career. “Dita” came from the name of the 1930s movie star Dita Parlo. When the woman was offered to shoot for Playboy, it was necessary to give a full name. Dita opened a phone book and selected the second name “Von Treese”. Somehow, editors did not see a mistake in the rough copy of the issue, and the model’s name was spelled as “Dita Von Teese”; she has been using it since that time.

The media call the artist Queen of Burlesque; indeed, she is amazing in this style. Dita has been dancing burlesque since 1992; she believes it makes striptease more playful. The 1930-40s musicals are her primary sources of inspiration, as well as the eccentric images of Luisa Casati, Anna Piaggi, Isabella Blow, and the pin-up star Bettie Page.

The audience remembers Von Teese’s shows in a bath and the dance with a feather fan. The martini glass dance is one of her best; Cameron Diaz performed it in Charlie’s Angels. When Dita became the spokesperson for MAC, she introduced the show with a lipstick.

In 2005, the woman danced at the New York Academy of Art; her $5-million costume was decorated with numerous diamonds. The next year, Dita was invited to Crazy Horse in Paris; she was the first guest celebrity there. The same year, the artist collaborated with the participants of America's Next Top Model and taught them how to dance. 2007 was marked with the show at the Erotica festival in London.

In 2009, Von Teese danced for the German group participating in Eurovision in Moscow; they became number 20.

Dita’s endeavor was also appreciated: she received the Won Best Female Performance at the Beverly Hills Film Festival. Two years later, one could see her in Saint Francis and The Boom Boom Room. The episodic part in A Kiss Before Frying is one of Dita’s recent works.

Dita Von Teese was a musical child, but she started singing professionally only in 2013: she debuted with the single “Disintegration” recorded with Monarchy. Two years later, the artist continued to collaborate with the duet as a model for the music video “Black Widow”. In 2016, she worked on the song “Gucci Coochie” with the South African group Die Antwoord.

Dita Von Teese’s personal life has been just as bright as her stage image. The dancer believes that the art of seduction depends on a playful mood and drive rather than beauty. The star does not keep secret the fact that she had sex with some hundred men. However, she has never loved genuinely, and her ex-husband Marilyn Manson was not an exception.

The rocker Marilyn Manson is just as eccentric as Dita. Their story began when the man called her and invited her for a drink. The woman did not get embarrassed, took a bottle of a good whiskey, and went to the musician. The night followed the evening; in the morning, the singer proposed to Dita and gave her a seven-carat diamond ring; she said yes.

The wedding ceremony took place in 2005 in Ireland, at the musician’s Kilshane House. The guests amused themselves with hunting, just like the 19-century noble. The bride looked gorgeous in her purple dress created by Vivienne Westwood. The designer was among the invited, as well as John Galliano, Lisa Marie Presley, and Johnny Depp.

The dancer did not conceal the fact that the relationship was just a formality; when it stopped being beneficial, the couple divorced. She had many other men and women, yet all the romances were short-term. Dita does not want to be a mother as soon as possible: she believes that feelings between a man and a woman should be genuine; as for now, she feels satisfied taking care of five nephews.

Dita Von Teese lives in Paris and Los Angeles, collects ballet shoes and old porcelain items, and improves her body shapes. The artist does Pilates and rides horses. According to the woman, training or dark moods cannot justify a messy look; Dita is always pretty and prepared for everything.

Fans can read the celebrity’s book about style, cosmetics, and hair care. Dita has created her own perfume that became one of the products created by stars in 2011. Von Teese’s lingerie and dress collections are also popular.

In 2017, Dita Von Teese began to work on the solo album and presented the song “Rendez-vous”. The artist confessed she did not feel comfortable as a singer as much as a dancer; still, she wanted to leave her comfort zone for a while and explore her artistic potential.

In February 2018, Dita was invited to host the Femmy Awards ceremony; she was wearing a transparent silk gown by the Russian fashion designer Ulyana Sergeenko. The outfit slightly opened the bustier, and its flaps revealed the artist’s lace stockings. Many glossy magazines published Dita’s look.

Von Teese continues to tour with her own burlesque group all over the globe. The celebrity posts announcements about future events on her Instagram page.