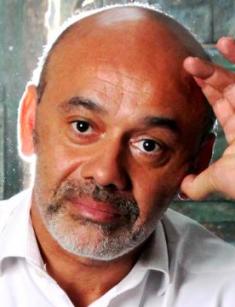 Christian Louboutin was born in Paris in January 1963. His parents were far from fashion and art: the father, Roger, worked as a carpenter, and the mother, Irene, was a housewife. The family lived modestly. Christian had three siblings.

In 1971, when the boy turned eight, he visited the National Museum for African and Oceanic Art. As Louboutin entered a hall, he noticed the sign that forbade stiletto heels. For some reason, the picture of the crossed shoe imprinted in the child’s memory. As the designer told journalists in one of his interviews, it was the first day he took an interest in women’s footwear.

The first shoe sketches appeared in Christian’s school exercise books; soon; the hobby absorbed him. Louboutin was little interested in studies; he was expelled from four schools because of the poor academic performance. The would-be designer spent all the time at the theater; dancers and their high heels excited him. The man called them his first style icons later.

In the mid-1970s, Louboutin found a book about the French footwear designer Roger Vivier who was also born in Paris. According to Christian, it just dawned upon him: that was what he wanted to do.

After graduation, the young man studied theater and sculpture at Académie d'Art Roederer. At the end of the 1970s, he got hired at the Folies Bergères, the cabaret: he was responsible for the dancers’ costumes and also created shoe sketches for the artists.

In 1979, Christian started a long travel to Egypt and India; he came back in 1981 and frequented Paris fashion houses. The young man showed his best shoe sketches. Finally, the famous designer Charles Jourdan took an interest in 18-year-old Louboutin. Jourdan was a shoe and accessories professional and accepted the young talent as his apprentice. Christian was learning how to identify sizes and make shoe trees for two years. In the late 1980s, the beginning couturier was accepted as a freelance designer for Chanel and Yves Saint Laurent.

The first item appeared in 1988: the provocative Pigalle shoes. They were notable for opening the inner arch of a foot and a part of toes; according to the designer, it was extremely sexy.

In 1990, Louboutin had his first individual orders. Little by little, Parisian fashion lovers fancied his products, and the designer opened the first boutique; the sales were growing. The next year, Christian registered his brand “Christian Louboutin”.

One day, Christian wondered what could become the final touch that would make his footwear spicy. Suddenly, the master looked at the model who was painting her fingernails. The red color turned out to the be last genius stroke that made the designer popular all over the globe.

The first collection of the shoes with red soles appeared in 1994; it was named “Follow Me”. The next year, Jean Paul Gaultier’s, Chloé’s, Azzaro’s, Givenchy’s, and Lanvin’s models were wearing Louboutin’s shoe on runways.

In 1996, the designer presented a new collection, Lucite, with transparent heels. Each pair was a masterpiece. For instance, Louboutin created one for the actress Arielle Dombasle: there were pieces of her husband’s love letters, locks of hair, and feathers in her heels.

In the 2000s, Christian presented new collections almost every year, for instance, Fetish (2007) and Marie Antoinette (2009). Besides, the designer and the wine producer Piper Heidsieck created the exclusive set: a design shoe and a bottle of champagne with Louboutin’s signature. 2009 was also notable for the men’s footwear line.

2011 was not all about ordeals. The fashion house presented extremely high heels: 20 cm. The master was inspired by ballet dancers and their feet posture as they were moving.

In 2012, the brand celebrated its 20th birthday. As for future plans, the designer has been considering cosmetics and jewelry lines.

The Parisian designer does not keep secret that he is gay. He came out to his relatives, and they accepted that peacefully.

The landscape designer became Christian’s partner; they entered the relationship in 1997.

Today, Christian Louboutin’s net worth is estimated at $85 million.