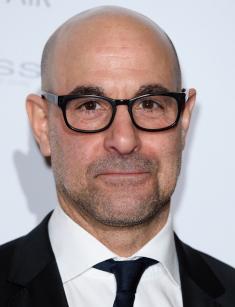 Stanley Tucci is an American actor, director, producer, and scriptwriter. There are more than a hundred projects in his filmography, and many of them have been nominated for the most prestigious movie prizes. Tucci has won Golden Globe twice (1999 and 2002) and Emmy three times (1999, 2007, and 2016).

Stanley Tucci was born on November 11, 1960, in Peekskill, New York, the east coast of the Hudson River. The boy’s parents came from Italy. The mother, Joan, was a secretary and a writer; the father, Stanley Sr., worked as a middle-school art teacher.

There were three children in the family: Christina, Gina, and Stanley; all of them devoted their lives to cinematography. In the early 1970s, the Tucci family moved to Florence and spent there a year.

Stanley attended John Jay High School and led an active sports life: the young man joined a baseball and soccer teams. However, the school drama club was the most exciting activity for Tucci. Together with his friend Campbell Scott, who also became an actor, he participated in many performances popular among the young audience.

After graduation, Stanley entered the State University of New York at Purchase, school of acting, and finished it in 1982.

Stanley Tucci started his career with the assistance of Campbell Scott’s mother who played the main character in a Broadway play The Queen and the Rebels and helped the yesterday’s students receive the roles of soldiers there. Three years later, Stanley debuted in cinematography and got an episodic role in the comedy drama Prizzi's Honor by John Huston. In 1991, the actor came back to the theater and participated in a Molière’s play.

The roles in Beethoven, The Pelican Brief, Kiss of Death, Road to Perdition, and Big Night brought the first fame. In the latter project, Tucci created the scenario together with his cousin Joseph; the actor’s mother wrote the cookery book for this movie, and the sister Christina had a small part there.

In 2006, the movie The Devil Wears Prada with Anne Hathaway and Meryl Streep was released. Tucci personified a mannered employee of a glossy magazine, Nigel, who helped Hathaway’s character to become one of the high fashion circles.

The drama The Lovely Bones based on Alice Sebold’s novel brought the artist one of his most notable roles. Tucci played a serial murderer of young women, George Harvey; he had consulted a former FBI profiler John Douglas, to prepare for this role. Peter Jackson directed the movie. The actor was nominated for the Golden Globe – Best Supporting Actor – Motion Picture and the Academy Award.

In 2011, Tucci personified Abraham Erskine in the Marvel movie Captain America: The First Avenger. The next year, he joined the cast of The Hunger Games and played Caesar Flickerman. Stanley’s character appeared in the next parts of the thriller; the final was released in 2015.

In 2017, Tucci participated in several projects: the musical Beauty and the Beast, the fantastic action movie Transformers: The Last Knight, and the dramas The Children Act and Submission.

The actor’s personal life has been marked with a tragedy: his first wife, Kate Tucci, died of breast cancer in 2009. She was born in 1962 and worked as a social worker. Stanley became her second husband: Kate had been married to the actor Alexander R. Scott.

The couple married in 1995. Three kids were born in this family; the spouses also brought up Kate’s two children from Scott.

In 2002, Tucci left his wife and had an affair with the actress Edie Falco. They appeared in the Broadway play Frankie and Johnny in the Clair de Lune by Terrence McNally. However, they split up, and the artist came back to his wife and children.

Two years after Kate’s death, the grieving man’s life improved: he engaged with the British literary agent Felicity Blunt. The actress Emily Blunt, Stanley’s colleague in The Devil Wears Prada, is her sister. On September 29, 2012, the lovers married at Middle Temple Hall in London.

Today, the couple lives in a small district Barnes, South-West London, together with the four-year-old son Matteo Oliver and Emilia Giovanna (born April 2018).

Today, the actor has five children; he has recommended himself as a good scriptwriter, producer, and director. The man has been nominated for the most prestigious movie awards and won five victories. In 2019, Tucci will appear in The Man Who Saved Paris, The Silence, and Kingsman: The Great Game.

Stanley Tucci is not an active social network user, and there are a few pictures in his Instagram. However, fans continue to tag the actor’s photos and leave comments. People write compliments and ask some personal questions.

Besides, fans compare Stanley with another actor of the Italian origin, Mark Strong. Indeed, both men are bald and have strong jaws and piercing eyes. The actors can play villains and kind guys equally good as well. 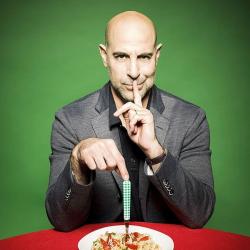