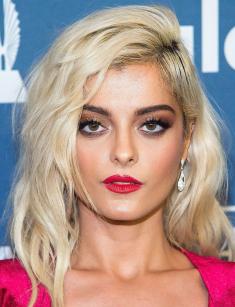 American singer Bebe Rexha became famous in 2013 thanks to the release of the single “Take Me Home” featuring Cash Cash. The composition “Hey Mama” and “In The Name of Love” made the girl's name even more popular. In addition to excellent singing, Rexha is also a songwriter. She created Rihanna and Eminem’s single "The Monster."

Bebe Rexha was born in Brooklyn, New York City, USA, in the summer of 1989. The girl’s father is Albanian. At the age of 21, he moved to America from the city of Debar, Macedonia. The young man settled in Brooklyn and met his future wife there. Although the woman was born in America, she also had Albanian ancestry.

The singer lived in a modest family, and the ordinary people worked like hundreds of other American families. At birth, she was named Bleta. In the Albanian language, bletë means "bee." From early childhood, her mother and father noticed Bebe’s signing skills. When she heard music on TV, the four-year-old girl sang it easily.

Bebe studied in an ordinary school, but to develop the daughter’s talent, and the parents enrolled her in a music studio, where she mastered playing the trumpet easily. Later, she taught herself to play the piano, and at the age of 11, the girl wrote the first song. She participated in all school events actively, loved musical productions very much and knew many of them by heart.

Bebe began to write songs in high school. She mastered music editors to create music on her own and saved pocket money to buy recording equipment.

Bebe received the first recognition when she was 14 years old. The girl participated in the local music competition and subsequently earned the "Best Teen Songwriter" award. Music producers from New York City often attend such events to search for young talented people, and one day they noticed the girl.

Bebe Rexha began her professional career at the age of 17. The girl managed to sell her first song. To be more accurate, she planned to sell it, but in the end, did not get paid a cent for her work. However, the following composition helped the author to earn $ 15 thousand.

2008 was a turning point for the singer. In the studio in New York, the girl met Pete Wentz, who at that time was a member of the popular band Fall Out Boy. The man had heard Bebe’s songs before, so he did not hesitate and suggested her to join the project, called Black Cards.

For the following two years, she toured across the country, performing with a new band, but in 2012, Wentz terminated the contract without explaining the reason. However, the man claims that they ceased cooperation mutually.

Although it was an unpleasant moment for Bebe, it didn’t let the girl down, and she continued to write songs for other performers. For about two years, the singer composed, edited and improved Eminem and Rihanna’s song "The Monster," which eventually became a hit and topped the American charts.

Then she decided to develop a solo career. By that moment, Bebe Rexha was already known as the author of the hits of Selena Gomez, David Guetta, and other celebrities. But she was not really popular. The song recorded with Cash Cash made the performer very famous. In 2014, a music video for this composition was shot, and the fans of the young singer appreciated her singing, as well as her attractive appearance. So she gradually began to win the hearts of listeners in America and abroad.

The actress wrote a composition called “Me, Myself & I” and also searched for a performer for a long time. Bebe showed it to various DJs and producers, but they always rejected it. When Bebe did not hope that she would find a singer, a miracle happened. The rapper G-Eazy who had just started to listen to it, immediately stated that he would take this song.

Rexha released the first EP in 2015. It consisted of 5 songs but received a lot of positive reviews. In 2016, the singer recorded the song "In the Name of Love" together with the Dutch producer and DJ, Martin Garrix. The composition was certified platinum and topped the European charts for a long time.

In October 2016, the young woman also released a new song, "I Got You." An incredible amount of downloads allowed it to be certified Gold in Canada, Australia, USA, and France. The singer filmed a music video for the song, but it was scrapped due to its explicit content. The second version was released in January 2017.

It inspired the artist to write new songs, and two years later Bebe already released two more albums, All Your Fault: Pt. 1 and All Your Fault: Pt. 2. Although these were also EPs, their songs topped iTunes Charts. In 2017, the star began her first solo headlining tour on March 1 in Dallas.

Bebe Rexha released the first studio album in 2018. It was titled Expectations, and includes singles "Self Control," "I'm a Mess," "Ferrari," "Mine," etc.

There is little information about the singer's personal life. The girl confessed in an interview that she was in love but then did not have feelings for anyone. Bebe has no husband and children, she often appears alone at events, and there are no pictures on social networks that can get the facts straight.

Nowadays Bebe Rexha works a lot, spends time in her studio in Los Angeles. But the young woman often visits native New York City and her relatives there. She also likes traveling.

In addition to regular performances and the concert tour across the cities of America, she continues to create and record singles. In 2019, her next album is planned to be released, but the number of songs is not known.

Bebe Rexha communicates with fans on social networks. The young woman regularly posts photos of concerts, events and personal life on Instagram. Her non-traditional figure (the height is 165 cm, the weight ranges from 63 to 67 kg) does not make the woman feel embarrassed. On the contrary, she shows it wearing swimsuits, underwear and other revealing clothes, and Bebe often dresses that way filming in music videos. 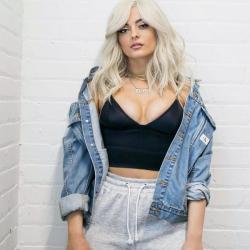