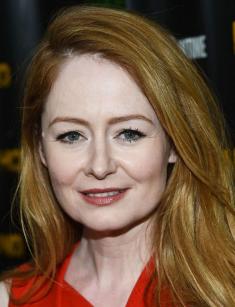 Miranda Otto is a popular actress from the famous Australian movie dynasty. She debuted on the screen at 18 and continued to work on homeland projects until 30. In 1998, she debuted in Hollywood and played private Bell’s wife in Terrence Malick’s military drama The Thin Red Line. Later on, she strengthened her position by the role of courageous Éowyn in Peter Jackson’s iconic trilogy The Lord of the Rings. Miranda has won many prestigious prizes including the Screen Actors Guild Award.

Miranda Otto was born on December 16, 1967, in Brisbane, Australia. The girl’s father, Barry Otto, was a famous Australian actor and voice artist; her mother, Lindsay Otto, worked as an actress but stopped her career after her daughter was born. Miranda has an elder stepsister Gracie who also devoted herself to acting.

The girl was six when the parents divorced. However, the father was always present in his daughter’s life: he took her to Sydney for weekends and holidays. Miranda and her mother used to live in Brisbane, Newcastle, and even Hong Kong.

The girl was fond of ballet and even planned to enroll at a ballet school; however, due to her health issues, she had to quit: Miranda was diagnosed with scoliosis.

Under those circumstances, the young talent switched to the theater and participated in amateurish performances with other children. Miranda’s father welcomed his daughter’s desire to become an actress and helped her prepare for the entrance exams. She graduated from the National Institute of Dramatic Art where Mel Gibson and Judy Davis used to study.

Miranda began to play in the movies before graduation: she received her first role at 18. It was the role of a teenager in the drama Emma’s War set during World War II.

The role of Nell Tiscowitz in the drama The Girl Who Came Late became a breakthrough. Miranda played a young woman fond of horses; this admiration brought her suffering at first, but she found a great love thanks to it. Otto was nominated for the prestigious Australian Film Institute Award for Best Actress.

Soon, the artist received numerous offers from directors. The same year, she played Annie in The Last Days of Chez Nous and was nominated for Australian Film Institute Award for Best Supporting Actress.

1995 was marked with the artistic crisis: Otto doubted if she had chosen the right profession and secluded herself in her house in Newcastle. Finally, in 1996, the director Shirley Barrett persuaded her to participate in the melodrama Love Serenade.

Soon, the actress had an ambiguous role: 18-year-old girl Katherine who had claustrophobia and lived with a lonely aging woman in the movie The Well. Critics’ opinions were diverse: while some of them believed the artist was not convincing others called her work genius. Otto was nominated for Australian Film Institute Award for the third time.

In 1998, Miranda collaborated with her father in the movie Dead Letter Office; Barry appeared in a small episode. The same year, the American director Terrence Malick started working on his military drama The Thin Red Line; the movie was shot in Australia, and the national casting was announced.

Miranda was given the role of Marty, the wife of private Bell who loved her immensely. In comparison, Marty met a new love while her husband was fighting. The movie had seven nominations for the Academy Awards as well as other prestigious prizes. This project became a road-opener for Miranda.

The role of Mary Feur in the mysterious thriller What Lies Beneath (2000) was the actress’s debut in the USA. The cast was impressive; Harrison Ford and Michelle Pfeiffer took the lead roles. The movie proved to be a success. Soon, Otto played the field naturalist Gabrielle in the comedy Human Nature; in 2001, it was presented at the Cannes Film Festival.

2002 brought the artist another piece of luck: following Uma Thurman’s rejection, the New Zealand director Peter Jackson was looking for an actress who would play Éowyn in the trilogy The Lord of the Rings. He watched the video of Miranda Otto at auditions and invited the actress at once.

Miranda had to take a six-week choreography and horse-riding course. She appeared in two parts: The Lord of the Rings: The Two Towers (2002) and The Lord of the Rings: The Return of the King (2003). Both movies won the Academy Awards and broke grossing records all over the globe. Otto won Broadcast Film Critics Association Award for Best Cast and Screen Actors Guild Award for Outstanding Performance by a Cast in a Motion Picture.

Impressed by Miranda’s acting in the popular trilogy, Steven Spielberg offered the woman the role in his new fantastic movie War of the Worlds (2005). Miranda was pregnant at that time; she wanted to reject the offer, and the script was corrected considering her state. After Miranda’s daughter was born, the artist had a break and lived with her family in Australia for a while.

Further on, the actress took an interest in series. She participated in the popular 2008 project, Cashmere Mafia, and personified a successful and merciless businesswoman Juliet Draper.

The actress marked in her interview:

“American television at the moment is so interesting and, particularly, the characters for women are so fantastic"; she admitted she "liked the idea of having a character over a long period of time and developing it”.

Miranda did not forget Australia. In 2009-2014, she worked in her home country and participated in Blessed, South Solitary, The Turning, and so on.

In 2015, Otto joined the cast of the American series Homeland about the daily lives of CIA agents. Her character, Allison Carr, is the leader of the Berlin CIA branch. The artist was nominated for Screen Actors Guild Award for Outstanding Performance by an Ensemble in a Drama Series for this project.

The series 24: Legacy was another TV project. Miranda Otto appeared in 12 episodes and played Rebecca Ingram, the wife of the senator who ran for the American presidency.

The actress does not like to talk about her personal life. In 1997, she began to date the popular Australian actor and director Richard Roxburgh. Tabloid journalists were following the couple all the time, and the young woman hated that.

On January 1, 2003, Miranda married the Australian actor Peter O'Brien. The couple has a daughter, Darcey (born April 1, 2005). From that time, the parents have not starred as much as they used to; they limit their workload to spend more time together in their large cozy house in Australia.

Nowadays, Miranda is working on the fantasy series Chilling Adventures of Sabrina; the premiere of the first season took place on October 26, 2018. Otto gained the role of Zelda Spellman, the witch and the elder aunt of the main character, Sabrina. Critics and the audience liked the series; the next season will appear in 2019.

Although Miranda is not a great fan of social networks, she has registered her Instagram page where she regularly posts new photos. 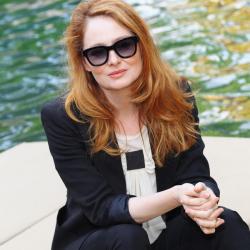