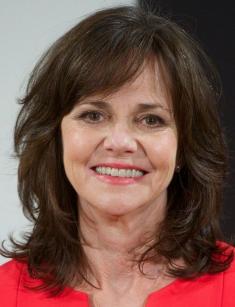 Forrest Gump’s mother told his son: “life is like a box of chocolates", the woman was an optimist. Compared with her, Sally Field who portraited the character knows that life is much more complicated. However, life difficulties didn't go lay a brick for the actress when achieving the goals set. The girl, who was bullied in childhood, succeeded worldwide and found enough courage to tell about the things which had happened to her.

Sally Margaret Field was born on November 6, 1946, in Pasadena, CA. Her mother, Margaret Field, was an actress, and her father, Richard Dryden Field, was an army officer. Through her maternal grandmother's genealogical line, Field is a descendant of Mayflower passenger and colonial governor William Bradford, her tenth great-grandfather.

Four years after Sally's birth, her parents got divorced, and her mother married actor and stuntman, Jock Mahoney. The second marriage of the mother was a tragic page in Sally's life. In her memoirs, published in 2018, the actress claimed that stepfather had subjected her to sexual abuse throughout her childhood.

Field’s acting career began in 1965, in a short-live sitcom Gidget, where she played the major role of a young surfer. The project wasn’t successful first and was canceled after the first season, but after the rerun, it was highly estimated. The Gidget had become so popular among teenagers that a board game designed with Sally’s character was manufactured. By the way, thanks to the series the audience could see Sally in a swimsuit at the beginning of her acting career.

In 1971, the actress starred in a TV movie Maybe I'll Come Home in the Spring, where she played a runaway teenage girl who returns home with a bearded, drug-abusing hippie.

In 1973, after several minor roles, Sally got a major role in the short-live series The Girl with Something Extra. When the project closed, the young girl decided to learn an acting skill professionally and attended Actors Studio with the acting teacher Lee Strasberg. Strasberg became a mentor to the actress, helping her to move past her television image of the girl next door.

In1976, Field got a major role in the TV series Sybil. The actress had to portray a complicated character, who afflicted with multiple personality disorder. Field’s acting skill impressed the critics, and she awarded Emmy in 1977 as the best dramatic actress.

Three years later, Sally starred in her first Oscar-winning movie, the social drama Norma Rae. Along with Oscar, Field won the Best Female Performance Prize at the Cannes Film Festival. In 1979, Sally played in the film Beyond the Poseidon Adventure opposite Michael Caine. The film wasn't entirely successful, but Field's acting attracts the audience even in projects that failed.

The actress won one more Oscar in 1984, for the role of Edna Spalding in Places in the Heart. Sally portraited a woman who tried to cope with running the farm and raising two children alone at the times of the Great Depression.

Field also won the Golden Globe Award, but her speech after getting the Oscar was well remembered. Emotional and a bit pretentious words «…you like me, right now, you like me!» have been parodied as excessive and remained in American culture for many years.

Having won Oscar twice and been nominated for many other film awards, Sally was in high demand as an actress and played both major and minor roles. In Mrs. Doubtfire, Field played the role of Miranda, the protagonist's wife, who was a subject of Pierce Brosnan's character at the same time.

In 1991, Sally starred in Not Without My Daughter, a controversial thriller based on the real-life experience of Betty Mahmoody's escape from Iran with her daughter Mahtob.

In Oscar-winning Forrest Gump, Sally Field played a small but touching role of Forrest Gump's mother, a woman who didn't give up, thanks to whom not the smartest guy became a hero on the war, a millionaire and just a happy person. Interesting was the fact that she was only ten years older than Hanks, who played the role of her on-screen son.

In 2000 and 2001, Field again appeared on the screen in a specific and robust role, playing a mentally disorder person. In a popular medical drama television series ER, the actress portraited Dr. Abby Lockhart's mother who suffers from bipolar disorder. She won an Emmy Award for this role in 2001. During her work in the series, its audience increased to 31 million people.

One more successful role was the character Nora Walker, the head of the Walkers in the series Brothers & Sisters. This role brought another Emmy Award for her performance in 2007, Screen Actors Guild Award, and a nomination for the Golden Globe Award.

In 2010, it was announced that the holder of two Oscars would star in a film about superheroes. In The New Amazing Spider-Man (2012), the actress portraited May, Peter Parker’s aunt who supported him even after it’d been known about his extraordinary power. In 2014, she appeared in this role again in the sequel The Amazing Spider-Man 2.

In 2012, Field appeared on the screen in the role of Mary Todd Lincoln, wife of the famous American President. Steven Spielberg, the director of the film, admitted that Sally was the first candidate on his list, as no one better than her will not portray the sophisticated image of this fragile woman. The actress was nominated for Oscar for the third time and, although didn’t win the award, earned fair praise from critics.

In 2018, Sally returned to the TV screen, playing the role of Dr. Greta Mantleray in the series Maniac that focuses on the people who agreed to experience a new drug in the hope to cure for mental disorders. But Dr. Greta Mantleray for some reason didn't tell them about the side effects.

From 1968 to 1975, Sally was married to Stephen Craig. They had two children: son Peter Craig, who became a novelist, and Eli Craig, who continued the path of his mother and became an actor and film director.

In the late 1970s, Field was dating Burt Reynolds, and after the end of her relationship with Reynolds, Field married second husband, a producer Alan Grayson. In 1987, the couple had a son Sam, and six years later the couple divorced.

Sally is a social activist. The woman stands openly against the war, fights for women rights, and supports the LGBT community, as the topic of sexual minorities is connected with Field’s personal life. The youngest son of the actress is openly gay, and it was his mother who helped him to make a coming-out at the age of 20.

Now the actress is the owner of many prestigious film awards and an honored member of The American Society of Cinematographers. In 2014, she received a star on the Hollywood Walk of Fame, which is located opposite the Wax Museum.

In 2018, the woman released an autobiographical book, where fans can learn about the life of the actress, including the terrible truth about what happened to Sally in her early years.

Sally’s photos on the Internet and the pages of Newspapers show that the actress looks great, despite her age. Perhaps because she is not trying to get younger and keeps herself in good shape. With a height of 5’3’’ (159 cm), Sally weighs 134 lbs (60 kg), and the woman doesn’t look exhausted or suffering from overweighting. 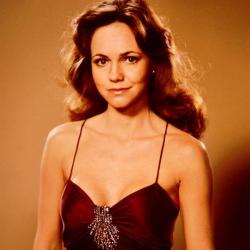