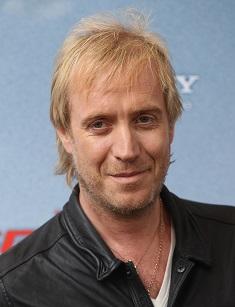 Rhys Ifans (born as Rhys Owain Evans) is a Welsh actor who appears not only in movies and TV shows but also on the theater scene. Ifans is mostly known for his roles in films Notting Hill (1999), Harry Potter and the Deathly Hallows – Part 1 (2010), TV series Berlin Station (2016), etc.

Ifans was born in 1967 in Pembrokeshire, Wales. His parents, Beti-Wyn and Eirwyn, were both teachers. Rhys also has a brother, Llŷr Ifans, who is an actor too and mostly known for starring in the film Twin Town (1997) together with Rhys. Ifans family used to live in Denbighshire.

Speaking about Rhys’ education, he has got it in Mold, Flintshire, where were situated the Ysgol Pentrecelyn and the Ysgol Maes Garmon, primary and secondary schools respectively. Since childhood, he has been showing some interest in acting, so he has attended acting classes at Theatr Clwyd. Then, the young actor has studied at college in London, the Guildhall School of Music and Drama.

Before appearing in movies and on the stage of the theater, Ifans became noticeable on the television, especially after 1990, when he presented Stwnsh (In English – “Mash”), a children's quiz programme that was aired on the TV. He also narrated the animated series Sali Mali for kids in 2000.

In 2008, Rhys starred in one of three episodes of the TV series The Last Word Monologues. He played a lonely Welsh farmer trying to escape from an overbearing mother. In 2012, the American series Elementary started releasing. It demonstrates a contemporary update of Rhys Ifans Sir Arthur Conan Doyle's personage Sherlock Holmes. Rhys plays Sherlock’s older brother, Mycroft Holmes. In 2016 and 2017 Ifans played the role of an American CIA case officer Hector DeJean in the U.S. thriller drama series Berlin Station, which was actually filmed in Berlin.

Speaking about stage work, Rhys has appeared on the stage of Theatr Clwyd (where he studied, by the way), Regent's Park Open Air Theatre, Donmar Warehouse and Royal National Theatre in London. He had the roles of Ebenezer Scrooge in A Christmas Carol, King Berenger in Exit the King, and also appeared in Hamlet (Theatr Clwyd) and A Midsummer Night's Dream (Regent's Park Theatre).

Rhys’ debut role was the role of Jeremy Lewis in Twin Town (1997), where also played his brother, as we said before. Ifans gained the international fame after appearing in the romantic film Notting Hill in 1999, for which he has been nominated for BAFTA Award for Best Actor in a Supporting Role. In 2001, he played one of the leading roles in Human Nature, where the actor sometimes appears nude. Let’s take a look at the other popular projects where he has starred.

Ifans played the role of Xenophillius Lovegood, the father of an unusual Hogwarts student, Luna Lovegood, in the Harry Potter and the Deathly Hallows – Part 1 (2010). Also that year, he had the leading role in the British-Spanish crime-drama named Mr. Nice, partly based on real events.

The remarkable film Mr. Nobody (2009) is also on Ifans' list. He played the father of the central personage, Nemo Nobody. That year, Rhys appeared in The Boat That Rocked, the comedy that was produced by Richard Curtis together with the pirate radio in the U. K. In 2012, The Amazing Spider-Man was released, and Rhys played the villain, Lizard, along with Andrew Garfield and Emma Stone in the leading roles.

There are some planned projects for Ifans. At the end of 2018, it was announced that Rhys and the Game of Thrones star Charles Dance joined the cast of the nest Kingsman film – Kingsman: The Great Game which would be released in 2020. We do not know what role Ifans got, because it was not announced yet.

Speaking about Rhys as a musician, he used to be a vocal part of the rock band Super Furry Animals before the first release of their records.

Ifans has also appeared in various music videos like “The Importance of Being Idle” by Oasis, “God! Show Me Magic” and “Hometown Unicorn” by Super Furry Animals, “Mulder and Scully” by Catatonia, etc.

In 2007 Rhys became a singing part of the psychedelic rock band The Peth (which in English means “The Thing”), where also was Dafydd Ieuan, the drummer of Super Furry Animals. The group had some concerts in Wales and London in 2008.

It is not much to know about Ifans' love life, because he does not like it to be public. However, the most memorable moment of his relationships was the split between him and the actress and model, Sienna Miller, who was going to be Rhys’ wife. They have been dating in 2007–2008; Rhys even got the same tattoo as Sienna has and that pictures a swallow. Ifans has proposed to his girlfriend three times, and finally, she said yes, but later she said that she was not ready to get married and wanted to live for herself a little bit. That was really hard for Rhys, but he eventually got over it and understood that he does not want his relationships to be in the spotlight.

Ifans’ latest girlfriend was the actress, Anna Friel; they have been dating from 2011 till 2014. For now, we do not know exactly if the actor is dating someone. As we can see, he is certainly not married and does not have any children.

In 2002, there appeared some controversy around Ifans because of his support of Welsh nationalist group Meibion Glyndŵr, which burnt more than 100 empty houses in Wales in the 1980s. This conclusion was made by society mostly after his interview with Mariella Frostrup for the newspaper The Observer when he made some comments.

At present, Rhys has an estimated net worth of $12.5 million.

Actually, Rhys has some issues with giving interviews. Let’s take, for instance, his interview with Janice Turner, a journalist and a writer for The Times. After their meeting, Turner named it a "truly awful encounter" on her Twitter page, and The Times itself called it "The interview from Hell." During the conversation, Ifans was rather “incoherent and sweary," and eventually, he said:

“I wanna end this interview now. I'm bored with you. Bored. Bored.” and just walked out.