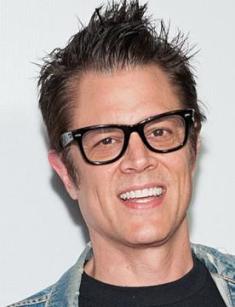 Johnny Knoxville's acting career started unusually. First, the man became famous as an eccentric prankster and extreme lover and only then became part of the history of big cinema. The creative American laid the foundation for a lot of memes with a ginger cat that photographed itself on camera and always had a caption starting with

Biography of the joker and comedian began in 1971. In the city of Knoxville (Tennessee, USA) on March 11 in the family of a tire salesman Philip Clapp, a boy was born, who was called by the double name Philip John.

When the child was four years old, he became very ill. Flu, bronchitis, and pneumonia, which struck the baby at the same time, gave complications – since then, Johnny has asthma.

The disease did not prevent him from doing well in school; the young man graduated from the educational institution with the highest marks. Health problems have failed to tame the restless character. From early childhood, the boy was fond of funny jokes and pranks on his friends and relatives, had a reputation as a notorious bully.

Disease, incidentally, served as a push to the unusual hobby in the future. Johnny realized that the human body was a tough thing to break down.

The dream to master acting skills led the young man to the Academy of Dramatic Art. In the first couple of months, directors did not pay attention to talented Johnny, the only offers he got were from commercials. The aspiring actor played a couple of cameo roles in several movies. This situation did not suit the young man, so he decided to make his destiny with his own hands.

The actor, taking the stage name Johnny Knoxville, began to write articles on the subject of our body's strength, reinforcing the conclusions with the experiments and sent them to magazines. The man described what he had felt after application of pepper spray, a police baton, a stun gun.

Once at the request of one of the magazines he put on a bulletproof vest and shot himself in the chest. Some of the tricks were filmed. According to Johnny, the most unpleasant sensations are caused by tear gas. The actor said:

"You get watery eyes for 15 minutes, I was advised to apply some milk, but it doesn't help either."

These extreme experiences, more like the experiments of a masochist, attracted the editors of MTV. And soon Johnny shone on a television in the new show Jackass, which became a ticket to the cinema for the actor. Knoxville, together with Spike Jonze coined ideas for project and scenarios for funny and to some extent stupid experiments.

In episodes of the TV show, Knoxville jumped across a river on roller skates, tested a cup as a protection for his privates, flew out of a circus cannon. At the beginning of each series, the authors of the project warned viewers that it was better not to try to repeat the tricks shown, but there was a wave of injuries of curious children and adolescents across the country. The channel began to receive lawsuits regularly.

In 2001, at the peak of its popularity, the project was shut down. A year later, the creators of the project made a full-length reality comedy Jackass: The Movie, full of vulgar jokes and even more sophisticated experiments on themselves.

At the same time as working on the show Jackasss, Johnny actively starred in feature films. The man got a supporting role in the legendary film Men in Black II (he played an alien villain) and in the action movie Walking Tall. Soon he reached the leading positions in the movies Grand Theft Parsons and The Dukes of Hazzard.

Directors of comedy films were happy to give Knoxville the leading roles. In 2005, the actor starred in the comedy directed by Barry W. Blaustein, The Ringer, in which he turned into a "disabled " - a participant of the Special Olympics, trying to earn money and pay off debts. On the set of Father of Invention, he met Kevin Spacey and Camilla Belle. In the Jackass Presents: Bad Grandpa, Johnny was playing a naughty 86-year-old man.

In 2014, Knoxville participated in the creation of the comedy movie Jackass Presents: Bad Grandpa .5 about the adventures of the older man and his grandson. On their way, they meet male strippers and other exciting citizens.

In 2013, the movie The Last Stand was released, the star cast of which included Arnold Schwarzenegger. In the motion picture, Johnny Knoxville became the director of the gun Museum and a Deputy Sheriff. And three years later, the actor was lucky enough to work with Jackie Chan in the movie Skiptrace. Johnny shared his impressions of these shootings in interviews:

"Working with Jackie Chan is like being around Elvis Presley. He is the biggest star in China, and he truly appreciates and respects his fans. It is a great pleasure and an honor to watch him act. Jackie always looked out for me and took care of me during the filming. He allowed me to perform tricks myself, and watched over my safety, gave invaluable advice and moral support."

Knoxville is often invited to voice-over cartoons and animated films. For example, Leonardo from the movie Teenage Mutant Ninja Turtles talks with his voice. The actor and showman owns a production company Dickhouse Productions, which films popular TV shows.

In 1995, Johhny got married for the first time. Melanie Cates became his beloved, and a year later they had a daughter Madison. The marriage lasted 12 years, but in 2007 the couple announced their separation.

Fans expected that the couple would reconcile, but the actor soon filed for divorce, explaining that it was not possible to agree on anything. The divorce process lasted eight months.

Immediately after the official separation, Knoxville had an affair with actress Naomi Nelson, who in December of 2009 gave birth to an heir who bears the double name of Rocko Akira Clapp.

Parents did not hurry to make their relationship official. They went down the aisle only a year later. On October 6, 2011, Johnny became a father for the third time-Naomi gave birth to their daughter Arlo.

Johnny Knoxville's net worth is estimated at $35 million. The actor continues to star in movies and different television projects. One of Johnny's latest works was the movie Action Point, which premiered in late March of 2018. In the center of the plot is a reckless young man who decided to open the most extreme Theme Park in America.

Knoxville got the leading role. Besides, the man worked on the script of the motion picture. This work is notable for the fact that the actor performs all the tricks without any stuntmen.

Now Johnny Knoxville is involved in the shooting of the new television movie Hawaiian Dick the release of which is scheduled for 2019.