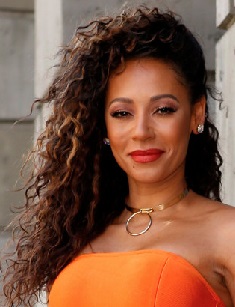 Melanie Janine Brown Benton is a British singer, songwriter, actress, and a broadcaster. Generally, the woman is famous under a pseudonym Mel B.

Her career started from the participation in “Spice Girls” band where she was nicknamed Scary Spice. With over 85 million records sold worldwide, the group became the best-selling female group of all time. However, soon the girl showed that she could be interesting also as a solo singer. In the early 2000s, her musical career reached the peak and later started falling slowly.

Melanie Brown was born on May 29, 1975, in Leeds, Harehills, England.She passed her childhood in the other city's part – Burley.

Melanie's father – Martin Brown – is from Federation of Saint Kitts and Nevis and mother Andrea is British.

Girl succeeded at an early age. Being a child, she decided to try out taking part in the beauty contest “Miss Caribbean Sun.” That time she had neither experience nor preparations, that's why young star didn't take the competition seriously. However, as luck would have it, the judges chose her among other girls.

By Mel's future admission, the reason for the victory in “Miss Caribbean Sun” was her long beautiful dark hair. Obviously, it can not be the absolute truth. Maybe the judges have seen something special in the young girl, except for her beauty? It is the very question which we will never know the answer to.

Since the very moment, Melanie started thinking seriously about a pop-star career. She learned by heart all the famous British singer's song, trying to look like every one of them.

At that time Brown found a new passion: beautiful rhythms. At the age of 10, she started playing percussion instruments which is strange for a fragile little girl.

When she was 15, in pursuit of her dream, Melanie entered the prestigious high school where she got a scholarship for gifted children. Moreover, there she started visiting dance classes where she was pretty successful.

Several years later, Melanie Brown graduated and got a degree of a dance teacher and a musician.

At the age of 18 girl started improving her vocal. Pretty soon she got a perfect chance to show her talent. Melanie found a newspaper announcement about looking for girls for a new music band, responded to it and sooner became one of the starts of “Spice Girls” band which was unknown at that time.

Real popularity came to the band later. Due to such a hit repertoire and charisma of its participants, the project became super popular in Britain and Europe. Their hits were broadcasted on radio, the audience at their concert was huge, and girls' faces were on covers of every tabloid.

Every member of a band had a unique nickname. Melanie B, in her turn, was nicknamed Scary Spice. The pseudonym was given to her because of her poofy African hair and extravagant style.

Their debut album, Spice, was a massive worldwide commercial success. The album peaked at number one in more than 17 countries and was certified multi-platinum in 27 countries. The collection centered on the idea of Girl Power. It was even compared to Beatlemania. In total the album sold 30 million copies worldwide and became the biggest-selling album in music history by a girl group and one of the most successful albums of all time

At that moment the band's popularity reached its peak. However, the band had some problems. Suddenly the girls started quarreling, accusing each other.

At the same period Melanie herself was going through personal problems: her then-husband – famous dancer Jimmy Gulzar – turned out to be a pure tyrant. Eventually, it caused their noisy divorce and.... the first Melanie's solo album.

Turning her pain and feelings into the music, Mel B recorded several hits which were included in the album “HOT” in 2000. Its two singles “Tell Me” and “Feels Good” were on top of the charts.

Earlier, in 1998, Mel B started her solo career alongside with work in the band. Her first single which she created with Missy Elliott was called “I Want You Back.” They released it on September 14, 1998. The song peaked at No. 1 on the UK Singles Charts.

In June 1999 woman with Timbaland released her next single “Word Up.” The song peaked at No. 14 on UK charts and became a soundtrack for “Austin Powers: International Man of Mystery.”

On September 25, 2000, Mel B released a full single Tell Me, peaking at No. 4 on UK Charts.On June 4, 2001, woman released her final single from Hot album - “Lullaby.” The song was dedicated to her daughter Phoenix Chi Gulzar who was a star of its music clip.

Melanie planned to release the fifth single “Hotter”. However, because of a low sales level of Lullaby, she had to deny it.

Since that moment the girl began working on her new solo project. In the first instance, she succeeded.

But later a full fail of her next solo album “L.A. State of Mind,” which was sold with circulation only of 1500 copies, made her refuse from his plans. Several producers denied working with Melanie.

Other girls from “Spice Girls” also failed to work alone and announced about their reunification. Melanie Brown joined them, and pretty soon they toured the world together. They made a special performance at the 2012 London Olympics closing ceremony in August 2012 where they performed "Wannabe" and "Spice Up Your Life."

In 2002 Mel B published her autobiography. A lot of TV-projects started inviting her as a guest star.

In 2003 Melanie left for the United States of America with her then-boyfriend Eddie Murphy. She stayed there and now is living in Los Angeles, California.

In 2007 woman took part in “Dancing with the Stars” show where got the second place. Later she worked repeatedly as a judge in an Australian and British project “The X Factor.”

In Melanie's life, there were several loud affairs. Since 1998 up to 2001, she was married to Jimmy Gulzar, famous dancer. They have a daughter Phoenix Chi Gulzar born on 19 February 1999. Despite it, the couple divorced.

In 2007 Melanie began dating to film producer Stephen Belafonte. The couple secretly married on 6 June 2007 in Las Vegas, Nevada. Now they are former spouses and have a daughter Madison Brown Belafonte born on September 1, 2007.

In her memoir, published in 2018, Brown confirmed that on December 11, 2014, attempted to commit suicide by aspirin. According to her admission, the reason for it was domestic violence by her husband. She also said that he had secret affairs with their nurse. The woman claimed that the latter became pregnant and Brown had to pay off an expensive abortion. Both accused rejected all the accusations. Stephen Belafonte accused his wife of drug abuse which, he said, was the reason for her suicide attempt.

In December 2018, Brown was in an incident where she broke several ribs and severed her hand, and was rushed into emergency surgery.

In 2016 Mel B announced that the Spice Girls – except for Victoria Beckham and Melanie C – were working on new material and a 20th-anniversary tour for 2017] The song “Song for Her” was later leaked online featuring the band members. Plans for a reunion were dropped when Geri Halliwell announced she was expecting her second child.

Brown also confirmed her return to The X Factor Australia. In 2017 she returned to Broadway to star in the musical Chicago as Roxie Hart.

On 5 November 2018, Mel B announced the Spice Girls reunion tour on her Instagram profile. It was confirmed that Mel B and ex-bandmates Melanie C, Emma Bunton and Geri Halliwell would return for a six-date UK stadium tour in 2019, their first for a decade.

The woman gave her voice to the 2017 animated film Blazing Samurai.

After Melanie's last divorce, she met Gary Madatyan, a businessman and a social worker helping women who had been subject to domestic violence. They had an affair and announced about Mel's pregnancy in Gary's Instagram profile in July 2018.