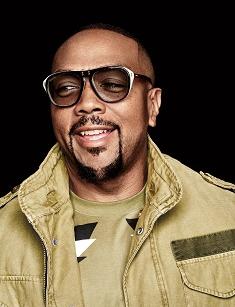 Timbaland is mostly famous for his songs «Apologize» (feat. One Republic), «Just The Way You Are» (feat. Keri Hilson), «Scream» (feat. Keri Hilson), «Here We Come.» In his career, the musician has collaborated with many outstanding rap representatives, including Swizz Beatz , Veronica, Rihanna, and Drake among others. It’s high time to emerge in Timbaland’s biography!

Timbaland was born on March 10, 1972. His birthplace is Norfolk, Virginia, the United States. He is the son of Latrice, who ran a homeless shelter, and Garland Mosley, an Amtrak employee. The rapper has a brother Sebastian, who is nine years younger than him and a sister Courtney Rashon, a makeup artist and author from New Jersey. As a kid, Timbaland studied at Salem High School, Virginia Beach, Virginia. He started working as a DJ at an early age and was known under the names DJ Tim and DJ Timmy Tim. As a High School student, Timothy became long-term partners with rapper Melvin (Magoo) Barcliff. Besides, he became a member of the production ensemble SBI (the abbreviation 'Surrounded By Idiots') which also featured producer Pharrell Williams. Timothy has famous childhood friends - brothers Terrence and Gene Thornton. That time Timbaland himself began writing lyrics.

At the age of 14, in 1986, Timbaland was messed up with a crime – he was accidentally shot by a co-worker at a local restaurant and was partially paralyzed for nine months. So, the musician had to work by the left hand while DJing.

As a teenager, he was noted by singer and rapper Missy Elliott. Due to DeVante, his new colleague, Timbaland got his nickname. Together they released many projects, such as the 1995 Jodeci LP «The Show», «The After-Party», «The Hotel», and Sista's (unreleased) début «LP 4 All the Sistas Around da World.» Timbaland's popularity started growing up.

In 2008 Timbaland married Monique Mosley. In 2013 the woman filed for divorce. Mosley, whose maiden name is Idlett, has demanded a substantial amount of compensation, citing a ten-year-long relationship. The couple has been married for five years, and have a son together, Reign. However, in divorce papers, Mosley has demanded Timbaland paid for supporting her elder child, arguing that despite the fact that the producer is not the biological father, he has openly claimed the child as his own.

Mosley was also requesting payments for life insurance and permanent alimony, among other things. Timbaland has compared Mosley to Aaliyah in the past, saying she bore striking similarities to the deceased singer.

In his career, Timbaland also Timbaland has had encounters with Karrine Steffans (2003) and Missy Elliott.

Once in his admissions, Timbaland confessed he had been addicted to drugs. To be precise, to oxycontin. He started consuming it at the age of 30 – he used it as an anesthetic. Because of neurological problems evoked by a gunshot wound he got as a teenager. However, the situation got out of hand; Timbaland started increasing the dose; his productivity started reducing. The musician began losing money, and all it led to break-up with his wife.

Once Timbaland almost died while sleeping – he saw a light. After it, he gave up consuming the cure cause thought about Michael Jackson.

Timbaland’s producing career started for R&B acts. At the beginning of the 1990s, he became a producer for several R&B acts songs, including Jodeci and Sista. 1996 happened to be a real breakthrough for him – he produced the majority of both's second album «One in a Million» and's debut album Ginuwine...the Bachelor, which included tracks «If Your Girl Only Knew» by Aaliyah and «Pony» by Ginuwine. Timbaland created his own music style – it was a fusion of hip-hop and R&B. The next year Timothy helped Missy Elliott with the production of her debut album «Supa Dupa Fly.» He also took part in the recording of the collection with his unique style. Also, 1997 was marked by releasing of Timbaland's hip-hop album «Welcome to Our World» recorded with his partner Magoo. By the end of the 1990s, Timbaland's fame had become enormous – the most influencing musician had started referring to him.

In 1999 he pleased his fans by releasing a track «Big Pimpin» recorded with Jay Z and rap group UGK. Also, he produced Missy Elliott's second album entitled «Da Real World,» produced for Ginuwine and Aaliyah, contributed to albums by Xscape, Nicole, Playa and Total. He made a remix for a hit «You Make Me Wanna.» At the beginning of 2000s, the artist collaborated with many different artists, produced songs including' «Roll Out (My Business)», Jay-Z's «Hola' Hovito», 's «Raise Up», and's cover of David Bowie's «Diamond Dogs», the exotic lead single «We Need a Resolution» (featuring himself rapping a verse), «More than a Woman», and the ballad «I Care 4 U.»

In November 2000, Timbaland and Magoo presented their second studio album.

Timothy took part in the recording of Tweet's debut album, «Southern Hummingbird,» collaborated with Missy Elliott again to release her fourth and fifth LPs, «Under Construction» and «This Is Not A Test!». Lil' Kim (with the song «The Jump Off») and southern rapper Pastor Troy signed with Timbaland for promotion their projects. During that period, Timbaland met producer Scott Storch with whom he also collaborated. Timbaland also contributed Justin Timberlake's solo debut, Justified, including the song «Cry Me a River.»

2003 was successful for the musician – he published the second album, «Deliverance,» and the third Timbaland & Magoo album, «Under Construction, Part II.» Although the projects were not of high success, they got positive reviews and were embraced by the internet community. In 2004 Timbaland succeeded to produce tracks for LL Cool J, Xzibit, Fatman Scoop, and Jay Z.

The same year, Timbaland released his second solo album called «FutureSex/LoveSounds.» Its the most popular songs are «SexyBack», «Sexy Ladies,» «Chop Me Up,» «What Goes Around... Comes Around».

He also succeeded to collaborate with Björk on his album Volta (including the songs «Earth Intruders,» «Hope,» and «Innocence,» with Ashlee Simpson on her third CD, Bittersweet World, including the song «Outta My Head (Ay Ya Ya),» with 50 Cent. On April 3, 2007, Timbaland's new album «Timbaland Presents Shock Value» featuring 50 Cent, Dr.Dre, Elton John, Fall Out Boy, Nelly Furtado, Missy Elliott among others was released. The same year, Timbaland started a rivalry with record producer Scott Storch. It all started from the track «Give It To Me» where Timbaland anonymously offended Storch: «I'm a real producer and you['re] just the piano man.» In his future admissions, the musician confessed the lines were about Storch.

Dima Bilan's Believe produced by Timbaland won the Eurovision Song Contest 2008. Besides music, Timbaland dedicated himself to helping the world. So, he designed a T-shirt print for the events against AIDS.

Timbaland planned to release his third album «Shock Value II» on November 23, 2009 but had to postpone it to December, 8. Felli Fel, Justin Timberlake, JoJo, Bran'Nu, Drake, Chad Kroeger, Katy Perry, Miley Cyrus, Gucci Mane, T-Pain took part in its releasing. The collection's leading single is «Morning After Dark.» The song was released on October 16, 2009, and got to the top 10 of the Billboard Hot 100. One more collection's successful track is «Say Something» recorded with Drake – it finished 23rd on the Hot 100. Besides, the album's single «Carry Out» recorded alongside Justin Timberlake also brought money and success for Timbaland – it reached No. 11 on the Billboard Hot 100.

2010 was marked by the rivalry between Timbaland and R&B singer Ginuwine after Timbaland failed to make an appearance at the singer's music video shoot of «Get Involved.»

On January 30, 2013, the musician signed a contract with Jay-Z's label Roc Nation. That time he also worked as a producer for Beyoncé's song «Grown Woman.»

In November Timbaland presented the single «Know Bout Me» from the fourth album «Opera Noir.» In February 2016, Timbaland alongside Missy Elliott produced Tweet's song «Somebody Else Will» from her third studio album «Charlene.»

On December 15, 2017, Timbaland's song «Grab the Wheel» featuring 6LACK was released. In 2019 Timbaland began teaching through Masterclass and now has his own instructional series on production and beat-making.

Timbaland’s net worth is evaluated at $85 million.

In January 2007 Timbaland was accused of stealing several elements (both motifs and samples) in the song «Do It» on the 2006 album Loose Nelly Furtado.

Apart from it, another plagiarism case was revealed - concerning the track «Versus» by Jay-Z, which was produced by Timbaland. The song resembled single «On the Way» by Swiss musician Bruno Spoerri. The situation had died away by March 2015.