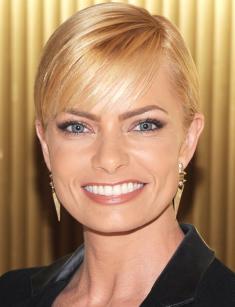 The name of actress Jaime Pressly is well known to fans of the series My Name Is Earl, which was shown on American screens from 2005 to 2009. Pressly played an ambitious, selfish and ruthless person named Joy Turner, the wife of the protagonist. Сomedy roles are the strong suit of the star. She shows all sides of her talent in the genre of comedy. Such movies with her participation as Tomcats (2001), Not Another Teen Movie (2001), I Love You, Man (2009) prove this fact.

Jaime Elizabeth Pressly was born on July 30, 1977, in Kinston, North Carolina. Her father, James Liston Pressly, is a car salesman and owner of a chain of laundries. The mother of the actress, Brenda Sue, is a dance instructor. Jaime Pressly became the youngest daughter in the family. Her parents also have an older son James and daughter Jessica.

The parents of Jaime divorced soon, and she went with her mother to California, the town of Costa Mesa, where she attended high school. For 11 years Jaime was training as a gymnast and therefore was noticed and promoted in the modeling and show business.

While being a teenager, she already signed a contract with a local modeling agency. In a surprisingly short time, Pressly managed to make a brilliant career, becoming a spokesmodel of International Cover Model Search. When Jaime was 14, her face was already on the covers of popular teen magazines.

Jaime Pressly had herself legally emancipated from her parents at the age of 15 so that she could travel to Japan and no one stopped her from making a career. Jaime went to Tokyo to work on a modeling contract and started a new chapter of her biography.

Jaime portrayed Violet, the daughter of the housekeeper Rebecca, who along with her mother and sister lives in the house of a wealthy family. Because of Rebecca's relationship with the landlord, her whole family is thrown out of the house. The grown-up Violet comes back to the house to take revenge.

In 1998, the actress made a debut on television in the series Push and then played the role of the undead assassin Mika in the television series Mortal Kombat: Conquest. The actress consolidated the success on TV shows with the long-playing project Jack & Jill where from 1999 to 2001 she played a ballerina Audrey Griffin.

The Neil Abramson's movie Ringmaster brought the next lead role and was Jaime's debut in the comedy genre. Although it received Golden Raspberry Awards, critics noticed the acting skills of Pressly, and since 2000 she started her story of achieving success in Hollywood.

After a small role in the romantic comedy 100 Girls, Pressly brightly performed in the comedies Tomcats and Joe Dirt. However, the most resounding success of that year became a sparkling comedy Not Another Teen Movie, where she played dazzling Priscilla, the Queen Of The High School and head of the cheerleaders. The character has to fight with ugly Jenny (Chyler Leigh) for the love of the coolest guy Jake (Chris Evans).

This movie brought the star not only a good income by grossing $ 66 million worldwide, but also a nomination for the prestigious MTV Movie Awards 2002. The participation in this film revealed the opportunity to participate in such successful projects as Survival Island (2002), Torque (2004), and Cruel World (2005).

The actress does not forget about the modeling career, too. She became the face of Lucky You fragrance by Liz Claiborne in 2001. In 2002, she took 8th place in Stuff magazine's list "102 Sexiest Women in the World" Repeatedly, Pressly posed in the bikini or even naked for glossy covers of Playboy, Allure, etc.

Jaime's new achievement was the Primetime Emmy Award for Outstanding Supporting Actress – Comedy Series for her role of Joy Turner in the popular NBC sitcom My Name Is Earl. In this 4-season TV project, the actress played the wife of the protagonist Earl Hickey (Jason Lee), a greedy and cruel woman. Having found out that her ex-husband won a large sum of money in the lottery, she decides to kill Earl to inherit his fortune.

In 2009, the film I Love You, Man starring Paul Rudd was released on the big screen. Paul's character, Peter, proposes to a longtime lover Zoe. But Zoe's friend, Denise (played by Jaime Pressly), does not like the guy and tries to prevent the wedding.

A new major project appeared in Jaime's filmography in 2011. In the series I Hate My Teenage Daughter, Pressly played the lead role of Annie Watson, a mother who struggles with the bad upbringing of her daughter Sophie.

In 2013, the actress appeared in the episodes of Melissa & Joey and Phineas and Ferb. Much more fruitful was the next year when the actress starred in the lead role in the comedy A Haunted House 2 and appeared as the main character in the drama Making the Rules, where she played a successful chef who lost her job in the middle of summer and received an unexpected vacation.

In 2014, Jaime appeared in the lead role in the series Jennifer Falls. The actress embodied the image of a successful businesswoman and a mother who raised a teenage daughter, who at one point loses her job, and after the "fall" goes to get a job as a waitress.

Besides, the star began working on the sitcom Mom. Jaime got the role of Jill, a wealthy divorced socialite, and AA member. The actress has been starred in the project on a regular basis since she first appeared in the 3rd season and to this day.

The actress was in a few relationships which were actively discussed in the tabloids. Among them are the relationships with a professional surfer Scott Rask, handsome actor Simon Rex, and musician Kid Rock. DJ Eric Calvo (DJ Eric Cubeechee) became the first husband of Jaime Pressly. They got married in 2004 and divorced four years later. In 2007, a year before the divorce, Jaime got pregnant and gave birth to a baby Dezi James Calvo.

The actress had her second marriage with Simran Singh, a lawyer of Indian origin. But, having got married in 2009, the couple broke up in 2011, citing irreconcilable differences.

Pressly is in no hurry to marry for the third time and lives in a civil marriage with a longtime boyfriend Hamzi Hijazi. In October 2017, the couple had twins Leo and Lenon.

The star shares pics of her children on Instagram, as well as many other images to the delight of her fans. By the way, in the photos of young Jaime Pressly, fans note a noticeable resemblance to actress Margot Robbie and guess how they could be related.

Now the actress continues filming in new shows (Mom, The Guest Book, etc.) and is preparing for new projects on the big screen in 2019.

Jaime Pressly has a net worth of $20 million