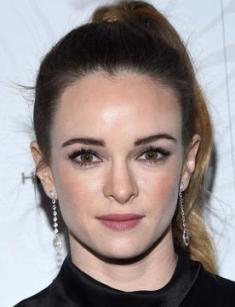 Danielle Panabaker is an American actress who is popular with both children and adult viewers. The young woman' roles invariably win admiration, and her characters distinguish themselves with sincerity.

The actress’s formal name is Danielle Nicole Panabaker. The future star was born on September 19, 1987, in Augusta, Georgia. Danielle is the oldest daughter in the family. It is noteworthy that her younger sister Kay Panabaker has also become a famous actress.

However, in early childhood, none of the girls showed any particular interest in acting. Danielle Panabaker's mother, Donna, recalled in an interview that she had dreamed that Danielle would pursue a medical career. However, Donna Panabaker also says that she doesn’t regret that her daughters have chosen a completely different path in life.

Danielle often tells in interviews that in childhood she constantly quarreled with her sister, Kay. The girls could not share toys, clothes, and even the mother's attention. But, as is often the case, when they grew up, Kay and Danielle became good friends, forgetting about childhood disagreements.

At the age of ten, Danielle Panabaker first went to a summer scout camp, where children learned to survive in the wild, cook over a fire, and navigate by the stars. Danielle was tired of it because the girl did not like adventure holidays. But Monday and Thursday were Danielle Panabaker’s favorite days of the week thanks to the theater group.

When she returned from the camp, Danielle did not give up acting classes. The girl was already fascinated by the stage, and she began to study the peculiarities of the profession at the community theater. Two years later, Danielle Panabaker could easily portray the title characters in amateur performances.

Besides, the girl landed the first role thanks to the theater. She was invited to shoot in a commercial for cornflakes. Of course, it did not bring the girl either fame or viewers’ love but inspired confidence in the novice actress. So, she began to fulfill her main dream.

The family soon moved to Illinois, but Danielle did not abandon her acting classes there. The girl already knew that she wanted to become an actress and tried not to waste time. After graduating from high school, Danielle Panabaker went to conquer Los Angeles.

Danielle Panabaker began her acting career with roles in TV shows. In 2001, the girl landed the role of Samantha Gray in The Guardian, and soon the actress’s filmography included characters in the cult TV series Law & Order: Special Victims Unit and Summerland. It is noteworthy that in the second project, the girl played together with sister Kay.

In 2004, the actress was invited to play a role in the TV film Stuck in the Suburbs. This Disney Channel original movie was the first prominent dramatic role of Danielle Panabaker. Danielle’s heroine is a 14-year-old girl named Brittany Aarons who wants to leave the small town where her family lives. One day, the girl meets a famous singer who forgets a mobile phone at a cafe.

Brittany decides that the forgotten phone of the star is a chance to get away from her town, and at the same time get to know the cute singer better. Brittany and her friend Natasha begin their journey. The funny and exciting adventures of the friends did not leave viewers indifferent, attracting the first fans.

After Stuck in the Suburbs, Danielle did not receive reasonable offers for a while. The girl played secondary roles in the TV series again, attending auditions and hoping for a new prominent role. Danielle Panabaker’s dedication and optimism helped the actress to get a supporting character in the movie Mr. Brooks.

This crime drama tells about the fate of an exemplary family man and a successful businessman. His perfect life is darkened by the fact that the hero can sometimes crave for murder, and nothing can stop him then. Whether Mr. Brooks can cope with his own dark side is a question that keeps viewers on the edge of their seat throughout its running time.

Thanks to the success of this film, Danielle received an invitation to play in the cult thriller Friday the 13th, directed by Marcus Nispel. The next thriller with the participation of Danielle Panabaker was the movie The Crazies. This film shows a fictional Iowa town that becomes afflicted by an unknown virus that has got into the local water supply.

It was not the last horror film, featuring Danielle Panabaker. In the thriller The Ward, the young actress played the patient of a psychiatric clinic, who was haunted by the ghost of a former inmate. In 2012, Danielle landed one of the leading roles in the movie Piranha 3DD, starring with Christopher Lloyd and Ving Rhames. This classic comedy horror film also became popular with viewers, receiving positive reviews from strict critics.

In 2014, Danielle Panabaker landed a prominent role again. This time, the woman signed a contract to shoot in the TV series The Flash. The actress got the part of Dr. Caitlin Snow, also known as Killer Frost.

Despite the extensive filmography, the list of the actress’s awards is short. In 2004, Danielle Panabaker won the Young Artist Award for the TV series The Guardian. The actress was also listed on the 2010 Maxim Hot 100 list. Although the actress has never posed nude, readers found Danielle very sexy.

There was very little information about Danielle Panabaker’s personal life for a long time. Only in 2016, the actress announced the engagement. Her boyfriend was Hayes Robbins. The man works as a lawyer and is not related to the world of cinema.

One year later, in 2017, fans were happy to learn about Danielle Panabaker’s wedding, which took place on June 24. The young woman posted a photo with her husband on Instagram, noting that it was the happiest moment in her life. It is known that the couple lives in a luxury apartment in Los Angeles.

In her spare time, Danielle Panabaker likes walking a dog and hanging out with her friends.

Nowadays, Danielle Panabaker continues to work on the set. In October 2017, the actress’s fans were delighted to watch the new season of the TV series The Flash.

Danielle starred with Grant Gustin, Candice Patton, and other actors in the continuation of the favorite saga about the fictional universe, based on the DC Comics.

Danielle Panabaker has a net worth of $3 million.