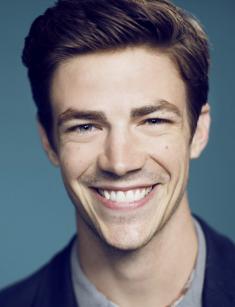 Grant Gustin is a famous American screen and stage actor whose signing talent has also attracted millions of fans. Generally speaking, the actor's credentials include favorite TV shows which are given undivided attention of enthusiastic viewers. Gustin gets bright and memorable characters. For example, he has played a lover, superhero, and even gay.

Thomas Grant Gustin was born on January 14, 1990, in Norfolk, which is located in the southeastern state of Virginia. Grant grew up with his siblings, brother Tyler and sister Gracie, in the average family whose members were not connected with creative work.

His mother Tina Haney worked as a pediatric nurse, and his father Thomas Gustin was a college professor. It is known that from early childhood Gustin was interested in creativity, so Grant's parents enrolled their son in the Governor's School for the Arts.

Grant was fond of not only playing musical instruments but also acting. The young man loved to participate in improvised and theatre productions. But it is worth saying that Gustin is talented in everything. He established himself on the big screen, and his clear voice conquered the world. Grant has recorded several popular songs.

After graduating from high school, the young man applied to Elon University in North Carolina, where he studied music.

It is noteworthy that, as a student, Grant Gustin made friends with another famous actor, Chris Wood. However, two years later, the young man wanted to establish himself in life quickly. So, he left the university and decided to try his hand at acting. It was difficult for him to tour and study simultaneously. Thus, young Grant took a role in the Broadway tour.

Like most of the actors, Grant Gustin began his acting career with bit parts in TV series. He made his debut in 2006, in the mystical TV series A Haunting. The young man managed to appear in one episode, so viewers hardly remembered a tall (Gustin's height is 6.07 ft. (185 cm)) and green-eyed brunet.

But the young man did not give up, so he attended numerous auditions, trying to find his place in the sun. Fortune smiled at the young man only five years later, when he got a leading role in the famous TV series Glee.

This musical comedy-drama television series aired during prime time on the Fox network. The plot focuses on the participants of the school show choir, its leader and a cheerleading coach, who is trying to close the singing club, which has become a favorite place for losers and outsiders. However, the choir teacher hopes that his team will gain fame all over the state.

Grant Gustin got one of the leading roles. He portrayed Sebastian Smythe, the lead singer of the choir. Gustin's character is an openly gay, who makes overtures to Blaine Anderson (Darren Criss). Few people know that thanks to the actors’ brilliant acting, the series was nominated for 19 Emmy Awards.

Grant Gustin managed to rehabilitate his reputation in the eyes of female fans because he played straight heterosexual men in other movies. Later, the actor’s filmography included the police procedure CSI: Miami, which told about the fearless police officers, solving the most complicated crime cases.

In 2012, Grant Gustin played a leading role in the thriller A Mother's Nightmare. The young man also managed to work on the same set with famous actresses Jessica Lowndes and Annabeth Gish. In this film, Grant portrayed a depressed guy, Chris Stewart, who could overcome family problems, dating Vanessa Redlynn.

Then the actor appeared in the teen drama 90210, the spin-off of the cult TV series Beverly Hills, 90210. Rob Estes, Lori Loughlin, Ryan Eggold, Dustin Milligan and other stars of show business played the leading roles.

Then Grant Gustin got lucky to portray the title character in the superhero TV series The Flash. The story, based on DC comics, talks about Barry Allen, who witnessed the murder of his mother. However, the police falsely accused her husband and Barry’s father of this crime.

The protagonist tries to solve this case without the help of the officers, and during the investigation, he finds Harrison Wells’s particle accelerator. When the miracle machine explodes, the hero is struck by lightning. Thus, now he can move at superhuman speeds.

Barry begins to live a double life. During the day he works as a police forensic investigator, and in the evening, the man catches criminals under the pseudonym The Flash. The brilliant cast of the series also included Danielle Panabaker, Tom Cavanagh, Candice Patton, Teddy Sears, and other actors. It is noteworthy that in 2015, Grant Gustin voiced the same character in the animated series Vixen.

In 2014, the actor appeared in a full-length film. It was the drama Affluenza directed by Kevin Asch. The film tells about the spoiled generation of the 2000s, where money, drugs and uncontrolled sexual behavior reigned. Ben Rosenfield, Gregg Sulkin, Nicola Peltz were Gustin's colleagues.

The actor's personal life is not shrouded in secrecy. Journalists know that if Gustin fights with villains on the screen, then in real life he has to fight off the army of obsessive fans.

But, female fans can be disappointed because Grant loves only one woman named Andrea Toma. The young people live a quiet life with their pet, but it is unknown whether they are planning to have a child or not. The lovers also travel, relax on the beach, go to restaurants and play football.

Besides, Gustin has an official Instagram page, goes to the gym and loves tattoos. The actor has an inscription tattoo “love is above all else” on his right arm, and the word “Gold” is tattooed on his left forearm.

Among other things, there are rumors that the young man had a love affair with a colleague, Hannah Douglas. The young man dated the blonde for about five years, but finally, their relationship ended.

Grant Gustin continues to film. In 2016, the young man played in the series Supergirl, which tells about Superman’s cousin.

Melissa Benoist performed the role of the girl with superpowers. The same year, Gustin starred again in a fantasy series titled Legends of Tomorrow.

According to media reports, in 2017, Grant will appear in the comedy-drama Krystal, starring Rosario Dawson, Kathy Bates and the star of the TV series Shameless, William H. Macy.

Grant Gustin has a net worth of $2 million.