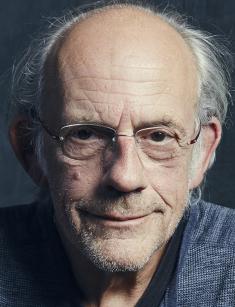 Christopher Allen Lloyd has brilliant cinematic works in his collection: One Flew Over the Cuckoo's Nest, Who Framed Roger Rabbit, and Interstate 60. And the role of Emmett "Doc" Brown in the legendary Back to the Future trilogy is considered to be the best work of the Hollywood master. In October 2018, the old-timer of the Hollywood hills and the holder of three Emmy awards turned 80, but he keeps working and pleasing his multi-million army of fans with his appearance on the screen.

His mother had Christopher Lloyd when she was 42 years old. The son became the youngest child in the family of the successful lawyer Samuel R. Lloyd and club singer Ruth (née Lapham). According to family legend, the star's ancestor from his mother's side was John Howland, who settled in New England in the 1600s. The descendants of Howland were Franklin Roosevelt, George Bush, and Benjamin Spock; as well as the best actor in the history of cinematography according to the majority of American film critics, the star of Casablanca, Humphrey Bogart.

The genes of the legendary Bogart must have woken in Christopher Lloyd. At the age of fourteen, after studying at the elite Fessenden School located in West Newton, Massachusetts, the guy went on the stage of the summer theater and never left it.

While studying at Staples High School in Connecticut, Christopher played in amateur performances and dreamed of acting. After graduation, in 1958, the young man went to New York, where he perfected his skills at the Drama Department of Lee Strasberg's student – Sanford Meisner. The mentor taught young actors the technique of playing using the system of Konstantin Stanislavski in his interpretation.

Young nineteen-year-old Christopher Lloyd went on the professional stage for the first time after a main-cast actor had fallen ill. In the early 1970s, the actor's name couldn't reach the Broadway theater posters. On the stages of small (up to five hundred seats) theaters, Lloyd played the central characters of Shakespeare's plays, such as A Midsummer Night's Dream, Macbeth, and King Lear. Soon Christopher Lloyd's repertoire grew to two hundred roles.

The unique appearance of the actor (low, raspy voice, bulging eyes, lean physique and the height of 6 feet) determined his roles. Christopher got invitations to get into the characters of villains and evil geniuses more often than into romantic and good boys. In 1973, Broadway actor was awarded the prestigious theater award Drama Desk Award for his skill in the performance of the leading role in the play Kaspar.

The cinematic biography of Christopher Lloyd began with a triumph: in 1975, he starred in the cult film directed by Miloš Forman, which won five Oscars. The drama film One Flew Over the Cuckoo's Nest starring Jack Nicholson and Danny DeVito brought Lloyd recognition.

Successful debut pushed the actor to move to Los Angeles and dive into the Hollywood film industry. One film after another starring the actor saw the light of day. Because of his unusual appearance, in movies and television series, Christopher Lloyd played freaks of all kinds, with whom the audience fell madly in love. In 1978, the premiere of the sitcom Taxi took place. Christopher Lloyd was entrusted with a leading role of a former hippie and priest, drug addict and taxi driver, Reverend Jim Ignatowski. For his work on this comedy television series, the actor received an Emmy award not only once, but twice.

Until the mid-80s, Christopher Lloyd appeared in a dozen motion pictures, perfecting his acting skill. In 1985, resounding fame almost fell on him. Christopher got into the character of the slightly insane scientist, Dr. Emmett Brown, in the science fiction comedy project Back to The Future, directed by Robert Zemeckis. Lloyd's eccentric character invented the time machine, thoughtlessly revealing the secret to a high school student, Marty McFly. The brilliant Michael J. Fox played the latter.

The legendary comedy's budget paid off twenty times, becoming the leader of the box office. In 1989 and 1990, the directors shot sequels to the film. The film brought the creators $958 million at the box office, and Christopher Lloyd got the status of a Hollywood star known in the whole world. From that moment on, the only offers the actor got were invitations to play the leading role in one movie or another. In 1986, he appeared on the screen as Professor B.O. Beanes in the television series Amazing Stories. And two years later, starred in the comedy film directed by Robert Zemeckis, Who Framed Roger Rabbit, portraying the evil Judge Doom.

At the end of the 1980s, Christopher Lloyd became the proud owner of a third Emmy Award for the role of Alistair Dimple in the TV series Road to Avonlea. A new wave of love from the audience fell on this Hollywood star after getting into the character of Uncle Fester in the dark comedy movie Adams Family directed by Barry Sonnenfeld. The hell family pleased the public so much that in 1993, Sonnenfeld shot a sequel to the film called Addams Family Values.

The detective old school comedy film Radioland Murders directed by George Lucas, starring Lloyd in the role of the sound director Zoltan, is also considered one of the successful works of the actor. Christopher Lloyd marked the end of the 1990s with the work on the remake of the comedy film My Favorite Martian. There, he appeared together with Jeff Daniels, Daryl Hannah, and British star Elizabeth Hurley.

The exception in a series of not very successful TV shows of the 2000s, which closed after the first season, was the famous film Interstate 60. With a budget of $7 million, Bob Gale's dark comedy film grossed $25 million at the box office. It wasn't a surprise, as the leading roles were played by James Marsden, Gary Oldman, Michael J. Fox, and Kurt Russell. As part of the star cast, Christopher Lloyd shined with his talent on every frame of the movie.

In 2010, the premiere of the black comedy film Piranha 3DD, in which Lloyd appeared in the character of Mr. Goodman took place. And a year later, the actor pleased his fans with the bright role of the Wizard in the series Dorothy and the Witches of Oz.

In 2013, the actor remembered his brilliant past and went on Broadway stage, playing Azdak in the production of The Caucasian Chalk Circle based on the novel by Bertolt Brecht. And one year later, the viewers were already enjoying the come-back of their favorite actor to the film industry. Christopher Lloyd appeared in the western comedy film A Million Ways to Die in the West together with such stars as Seth MacFarlane and Charlize Theron.

The talented actor played a supporting but very striking part in the prequel action movie called Sin City: A Dame to Kill For. Despite the appearance of Jessica Alba, Mickey Rourke, Bruce Willis, the film received mediocre reviews.

Christopher Lloyd has a rich filmography and an equally intense personal life. The actor was married four times, but all marriages ended in divorce. With his first wife, Catherine Boyd, he lived for 13 years and broke up in 1971. Three years later, he led the actress Kay Tornborg down the aisle, together with whom he also spent a dozen years.

A year after his divorce from Kay, he got married to Carol Ann Vanek, living with her for three years. Surprisingly, the family life with the fourth wife – the screenwriter Jane Walker Wood also lasted thirteen years. Christopher Lloyd has no children from any of these marriages. But the actor has a nephew Sam Lloyd, a musician, and actor, who starred as a lawyer Ted Buckland in the comedy-drama series Scrubs.

Unsuccessful marriage unions have not repulsed the Hollywood star's developed "habit" of getting married. And now he is spending his old age together with a real estate agent Lisa Loiacono, with whom he got engaged in 2016. One can see Christopher Lloyd with the young beauty Lisa Loiacono on his account on Instagram.

Lloyd does not like to appear in public too much, so when he signs up for a movie, he makes sure that there is a special remark in the contract about him not being obligated to give interviews and participate in promo-tours. In his spare time, Lloyd enjoys fishing, listening to classical music, and cycling.

Christopher Lloyd has a net worth of $50 million. Despite his advanced age, the star continues to appear in films. In May 2017, the premiere of the third season of the fantastic thriller television series 12 Monkeys took place, in which the actor was given the role of The Missionary. And in April, Zach Braff's comedy film Going in Style, a remake of the 1979 comedy movie Going in Style. Christopher Lloyd was entrusted with the role of Milton.

At the end of September 2017, the Hollywood star was a guest-star at the festival Comic Con Russia in Moscow. Recently, fans were pleased to find out about the release of two new projects with his participation, including the thriller film The Sound directed by Jenna Mattison.