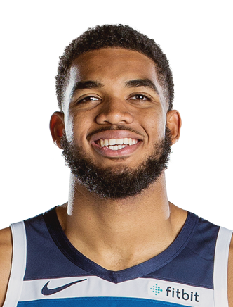 Karl-Anthony Towns is a Dominican-American professional basketball player working for the Minnesota Timberwolves of the National Basketball Association (NBA) at a center position in the box of defense. Earlier he performed for the Kentucky Wildcats. In his career, the sportsman got a considerable amount of awards.

Karl-Anthony Towns was born November 15, 1995, in Edison, New Jersey. His father, Karl Towns Sr., is African; his mother Jacqueline Cruz is from the Dominican Republic. His parents were strict and made Towns read and study at least 2 hours a day.

The future sportsman passed his childhood in Piscataway, New Jersey. He studied at the Lake Nelson Seventh-Day Adventist School. Later, in 2009, he entered Theodore Schor Middle School from Our Lady of Fatima School. Being a student, Karl liked journalism and was a school reporter.

Towns' father played basketball in the Monmouth University team. Obviously, he gave his love for the sport to the son.

Being a freshman at St. Joseph High School, Towns helped the team to participate in the state championship in 2012 and therefore got the high position in the ESPN 25 national ranking of high school players. Also, Towns led the team to state titles in 2013 and 2014.

At the age of 16, Karl-Anthony was selected to Dominican Republic national basketball team. Although Towns wasn't dweller of the Dominican Republic, he had the right to play for this country because of his mother.

During the competitions in 2011-2012, John Calipari was the team's coach. As a result, the players managed to finish third in the 2011 FIBA Americas Championship and got a fourth place at the 2012 FIBA World Olympic Qualifying Tournament for Men

In December 2012, Towns announced his decision to play for the Kentucky Wildcats.

In 2014, Towns graduated from school.

When Towns was a freshman, he used a unique "platoon system" which helped him improve the results: he started averaging 10.3 points and 6.7 rebounds in 21.1 minutes per game.

Besides sport, the student was interested in medicine. He studied kinesiology in one year and was going to become a doctor after his basketball career.

On June 25, 2015, the team Minnesota Timberwolves selected Karl-Anthony Towns in the 2015 NBA draft. They signed on 7 July. Towns' debut NBA game for the Minnesota Timberwolves team was on October 28. In the match against Los Angeles Lakers, he recorded 14 points and 12 rebounds. The next game was on October, 30. The team played against the Denver Nuggets. Towns' perfect results (28 points, 14 rebounds) led Timberwolves to their first 2–0 start with two wins on the road in team history.

During his first 13 games of the season, Towns' average results were 16,0 points and 10,4 rebound per game. But in the next five matches, the player deteriorated them to 8,4 points and 6,0 rebounds. Nevertheless, on December 3, Karl-Anthony Towns was called Western Conference Rookie of the Month for November.

In the next games, Karl-Anthony improved his results. The game he played on 30 October was his best victory. It was the match against the Portland Trail Blazers. Towns recorded 27 points and 12 rebounds. 2 games later, on 9 December, the basketball player made 26 points and 14 rebounds in a 123–122 overtime win over the Los Angeles Lakers.

On January 20, 2016, there was the best Towns' game in the season: the team played against Dallas Mavericks, Towns recorded 27 points and 17 rebounds.

In the next match, on January 29, the player recorded 32 points and 12 rebounds and became the youngest player to make 30 points and ten rebounds in a game, since Kevin Durant did so in 2008

On 27 February, in the fight against New Orleans Pelicans, the player recorded 30 points, 15 rebounds. As a result, Karl-Anthony Towns was recognized the Western Conference Rookie of the Month for February.

On 25 March, in the match against the Washington Wizards, Towns recorded ten rebounds and set a Minnesota rookie rebounding record

In the next game, on 7 April, he succeeded to make his 50th triple-double of the season, with 17 points and ten rebounds in a 105–97 win over the Sacramento Kings.

In the finale of the season, on 13 April, Towns recorded 28 points and 14 rebounds in the match with the New Orleans Pelicans

On November 30, 2016, in the next NBA season, Karl-Anthony again showed the perfect talent and professionality: in a loss to the New York Knicks the player recorded the career maximum of 47 points and 18 rebounds. At the age of 21, Towns became the youngest basketball player in the last three decades to have more than 45 points and 15 rebounds.

On December 28, Towns recorded the first triple-double of 15 points, 11 rebounds and ten assists in the match against the Denver Nuggets. On January 19, 2017, he had 37 points, 12 rebounds, and five assists.

On November 15, 2017, Towns had 26 points and 16 rebounds for Minnesota. The player was in the top 10 in almost every statistical category in NBA history. He had 8th place in points, third in rebounds and second in double-doubles (number one was Dwight Howard).

On December 14, 2017, in the game against the Sacramento Kings, the player recorded 30 points, 14 rebounds, five assists, and five blocks. He and Kevin Garnett were the only players from Wolves to have 30+ points, 10+ rebounds, 5+assists and 5+blocks per game.

On March 20, 2018, Karl-Anthony made his best 60th NBA double-double, having recorded 30 points and ten rebounds in the fight against the Los Angeles Clippers.

On September 23, 2018, Towns signed a contract of a five-year extension with the Minnesota Timberwolves. The team's government is not going to trade such a brilliant player. His salary is $7,839,435.

In the 2018-2019 season, Karl-Anthony Towns recorded 21 points in the fight against the Charlotte Hornets and became the fifth youngest player in the league to have 7000 points. It should be noted, that Towns is only 23 years old. Other sportsmen who succeeded to do that were Dwight David Howard, playing for the Washington Wizards (23 years and 121 days old), Kevin Wayne Durant from the Golden State Warriors and Carmelo Anthony from the Huston Rockets (both 22 years, 110 days old) and LeBron James playing for the Los Angeles Lakers (21 year, 358 days old)

In March 2019 Karl-Anthony had a crash. The accident was severe, and, according to Towns' words, it was a miracle that the sportsman is alive

At the middle of March, in the game against Washington, Karl-Anthony Towns injured his knee. According to Jane Moore, American journalist, MRI showed that there was no reason for worrying, and the doctors concluded trauma to be slight. Karl recovered in several weeks.

Nevertheless, the government of Towns' team didn't allow the sportsman to play in the match with New York Knickerbockers because of the swollen leg.

One of the most popular questions about the sportsman is: “Who is Karl-Anthony's wife?”

At present, he is single

In 2016, Karl-Anthony Towns started dating Kawahine Andrade, a fitness-model and Instagram star from Hawaii. She graduated from Konawaena High in Hawaii and moved to Orange, California.

The couple broke up in summer 2018. There was gossip on the Internet that Towns's girlfriend Andrade cheated, that she had sex with Wolves’ shooting guard Jimmy Butler. However, both of them denied the rumors. The actual reason for their break-up was a difference in the characters.

Today there is no information about Karl-Anthony's relationship.

Karl Anthony Towns is a Dominican American professional basketball player who has a net worth of $9 million.