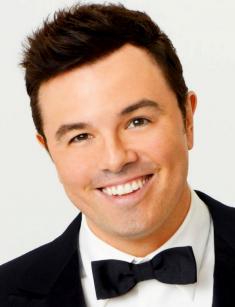 Seth MacFarlane is an American who fulfilled his childhood dream of becoming an artist, film director, screenwriter and actor. His animated series Griffins and American Dad! have become iconic works which for decades are making the whole world laugh. MacFarlane's contribution to cinema was marked by many awards and prizes, including prizes for directing, screenwriting and voicing cartoon characters.

Seth Woodbury MacFarlane was born on October 26, 1973, in Kent, Connecticut, U.S. His parents, Ronald Milton MacFarlane and Ann Perry (née Sager), the descendants of the first American settlers, married in 1970 in Boston. After they moved from Boston to Kent, they started working in a local college. His mother worked in the Admissions Office, and his father was a teacher.

By drawing cartoon characters Fred Flintstone and Woody Woodpecker, Seth from early childhood was interested in illustrations. At the age of 5, the talented child decided that he wanted to become an animator and with the help of his parents began to create flip books, and then began publishing a weekly comic called Walter Crouton in the Kent Good Times Dispatch newspaper.

In 1991, MacFarlane received a diploma from Kent high school and an 8-millimeter camera, which became for several years a faithful companion of a gifted young man.

Graduating from the Rhode Island School of Design (RISD), Seth intended to get a job in Walt Disney's company. However, the fate brought him to the Studio Hanna-Barbera after the release of his graduation film called The Life of Larry, which became the inspiration for the animated series Family Guy.

The atmosphere at Hanna-Barbera Studio was like a multi-functional conveyor belt, where workers have to perform a variety of operations. Seth began his career as a screenwriter, creating episodes for the animated show The What a Cartoon Show, and then served as an artist and project director.

Among other works of the young man, there are the series Cow and Chicken, Dexter's Laboratory and I Am Weasel. As part of the team show called Johnny Bravo MacFarlane honed the skill of writing and met actors Adam West and Jack Sheldon, who later played an important role in his creative biography.

At the same time, Seth created plots for animation projects for The Walt Disney's Company named Ace Ventura and Jungle Cubs. Working on the projects, he received the most valuable experience in writing a subject line of the narration and development of characters.

In 1996, Hanna-Barbera released a new show Larry & Steve, based on the life of the characters from Seth's graduation work, which became so popular that the film company thought about creating a full-fledged series with funny cartoon characters.

Not being able to provide better airtime, MacFarlane's employers introduced him to the heads of the department of alternative entertainment of The Fox Broadcasting Company, who gave the screenwriter $50 thousand to create a pilot of the future animation show. Six months later, Seth presented a comic masterpiece called Family Guy and received a pick up for the first season of the comedy series and a post of executive producer on the television channel.

In the premiere episodes, MacFarlane worked as director, screenwriter, composer, and artist. Besides, the main male characters spoke with the voice of their creator. The story of the Griffins family immediately won the hearts of the public. And in 2008 the studio extended the contract with the author, offering him a fee of $100 million. Working on the show, Seth received many television awards, including the Primetime Emmy Award and Teen Choice Award.

A serial cartoon for adults called American Dad!, which is focused on the life of the family of CIA officer Stan Smith and his wife Francine, became another great work of MacFarlane. Working on the plot, Seth used elements of sharp political satire and sparkling household humor, which made the show popular with the audience.

In 2009, MacFarlane created a project called The Cleveland Show, which became the spin-off of the series Family Guy. He also became the author Seth MacFarlane's Cavalcade of Cartoon Comedy, aired from 2008 to 2010. In August 2011, FOX ordered the screenwriter 13-episode movie about scientific discoveries Cosmos: A Spacetime Odyssey, which premiered in March 2014.

MacFarlane's feature film debut work as an actor and director was a romantic comedy Ted starring Mark Wahlberg and Mila Kunis. The movie received warm reviews and was a commercial success, recouping production costs in the first weekend of hire. In 2015, the story of Teddy Bear named Ted was developed in a sequel called Ted 2.

In 2014, Seth's filmography was supplemented by the film A Million Ways to Die in the West, where its creator also played a leading role, and the fantastic series The Orville, released in 2017.

MacFarlane is a confirmed bachelor in search of a perfect girlfriend. He does not avoid women's society but is not going to tie the knot.

In 2012, Seth was dating Emilia Clarke, the actress of the series Game of Thrones. And after The 85th Academy Awards ceremony the media started talking about the relationship of the director with Hollywood beauty Charlize Theron and published a photo of the couple walking together.

In an interview, MacFarlane once admitted that he was very similar to the character of Brian Griffin, who is trying to arrange personal life and get married, to find a devoted wife with whom he could a family and have children.

MacFarlane's directorial talent provided him with work for the decade ahead. Continuing work on the series Family Guy, American Dad! and Robot Chicken, Seth is now one of the highest paid and sought-after authors in the American film industry.

Moreover, the acting career, started with the movie Ted, has been developed. So, in 2019 the audience will see MacFarlane in the series The Loudest Voice and Star Wars: Detours.

At present Seth has a net worth of $200 million.