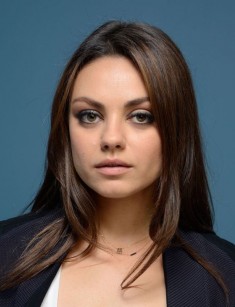 Mila Kunis is the young American actress of the Ukrainian origin who has gained much popularity in Hollywood. Mila was born on August 14, 1983, in the Ukrainian town Chernivtsi. As the young woman’s parents taught her to keep her ancestry secret, her nationality was questioned by American journalists; however, the actress said she was born in a Jewish family in one of the interviews for The Sun. Mila’s mother used to be a physics teacher at school; nowadays, she manages a drug store. The father was an engineer at the plant “Legmash”; today, he owns a small taxi company.

As soon as the Soviet Union collapsed in 1991, the family emigrated to Los Angeles where the girl had to go to school without any knowledge of English; one can hardly imagine what a 7-year-old child felt. She described these horrors in one line of her college application essay: “Imagine being blind and deaf at age seven.” However, the girl endured everything and took up acting at the famous Beverly Hills Studio – small wonder for someone born in the house of Leo.

In 2001, Mila Kunis graduated from school and attended the University of California and Loyola Marymount University lectures until she left studies for cinematography. The actress had an eye surgery right before she graduated: she suffered from chronic iritis and got blind in the one eye, and the surgery helped. Mila also has heterochromia: her eyes are of different colors.

Since 9, Mila began to work on TV. She met Susan Curtis, the TV show “Days of Our Lives” manager, and participated in this project as Hope Williams with her assistance. The girl also took part on other famous TV projects, such as “Baywatch,” “Walker, Texas Ranger,” and so on.

Mila Kunis’s fascinating abilities were noticed. In 1998, she got accepted to the series “That '70s Show,” although only actors aged 19 and more were allowed to take part in the project; Mila was 14 at that time. The future star just did not say anything about her age. When the truth was discovered, Mila had already played in several episodes, and the directors could not bring themselves to throw away the young talent. Besides, Mila was accepted despite the fact that her English left much to be desired. The actress had some classes with a teacher between the series scenes.

The young woman played in the sitcom “That ‘70s Show” for all eight years and appeared in 200 episodes.

Together with working on the series, Mila took part in voicing the cartoon “Family Guy”; Meg, the Griffins’ daughter, had the actress’s voice. The teachers’ endeavor did not go in vain: producers and critics liked Mila’s work so much that the actress was nominated for Grammy Award as she participated in the “Family Guy” full-length movie.

The modest Ukrainian girl appeared on the big screen in 2001: she played in the movie “Get Over It,” yet this work was not breathtaking. The second attempt pertains to the 2002 thriller “American Psycho 2”: Kunis had one of the major roles, but both critics and ordinary watchers remained indifferent to the actress.

The large break for 5 years followed. Finally, Mila tried to grab attention to herself for the third time and played in the comedy “Forgetting Sarah Marshall” – she made it. The movie was a commercial success, and Kunis was nominated for the Teen Choice Award. It is interesting that Mila was given the role of Rachel after the casting performance for the role in the comedy “Knocked Up” was unsuccessful.

Soon, the actress starred in the movie “Max Payne” which was the screen adaptation of the computer game under the same title. Kunis got the role of the assassin Mona Sax and had to learn shooting, boxing, and some martial arts.

The 2010 movie “Black Swan” brought the actress the real fame. This movie is the psychological thriller where Mila Kunis and Natalie Portman played rivals and ballet dancers. While the role of the assassin required shooting and the art of side impact, “Black Swan” implied hard work with a ballet bar and a strict diet. This sacrifice was justified: the actress received the Saturn Award and won the Marcello Mastroianni Award for Best Young Actor or Actress at the Venice Film Festival. The movie “Black Swan” was nominated for the Academy Award in several categories.

In 2012, Mila Kunis and Mark Wahlberg took part in the movie “Ted.” The project was extremely successful; it was the best grossing R-comedy in the history of the American cinematography. The second part of the movie with the famous Morgan Freeman came out soon, but Mila did not take part in it; Amanda Seyfried got the major female role.

Mila Kunis continues to act in movies; she receives comedy roles mostly. Overall, she has starred in many comedies, fantastic action movies, and even dramas. The fantastic movie “Jupiter Ascending” is one of her newest works where she played the main character.

Nowadays, Mila is trying a new profession of a producer. The drama series “Meridian Hills” is her first work.

In 2016, the movie “Bad Moms” with Mila Kunis was released. The movie budget was $20 million; the box office was $179 million. Today, a new movie with Mila playing the major part is being made; in the US, the release is planned in 2018.

In 2018, the Hollywood star’s fans continue to follow the actress’s Instagram publications and other pages of various social networks. Many people like Mila’s makeup and wonder if the famous actress has some beauty secrets.

Mila’s first known love affairs occurred when she worked on the series “That ‘70s Show.” All Mila’s boyfriends were her colleagues.

In 2002, the actress was seeing Macaulay Culkin who had brilliantly played in the comedy “Home Alone.” The couple even planned to marry, Culkin gave Mila a diamond necklace, yet there was no marriage. As Mila confessed later, she was bored with Culkin: the “Home Alone” daredevil turned out to be a homeboy. After the breakup, Culkin started taking hard drugs, fell into depression, and tried to commit suicide in 2012.

Mila Kunis was single for a long time until she met Ashton Kutcher in 2012. The actor became her boyfriend and, later, husband. As their daughter was born, the young people married in 2015. In 2016, the press reported the actress was pregnant, and Mila gave birth to a son soon.

In 2016, the American media informed that Kutcher’s ex-wife, the Hollywood actress Demi Moore, was constantly giving him advice on how to bring up children. Demi Moore was allegedly calling her former husband and tried to make friends with Mila. In her turn, Kunis reacted badly and said that Demi Moore’s behavior was just loutish.

In 2013, Kunis visited Russia and took part in the famous Russian TV show “Evening Urgant.” The famous actor and movie director James Franco participated in the program as well.

Mila Kunis’s Russian is pretty good: everybody could see that in Moscow where the actress came together with the famous American singer and actor Justin Timberlake. The stars came to the Russian capital to represent the movie “Friends with Benefits” where they starred. 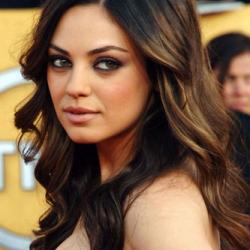