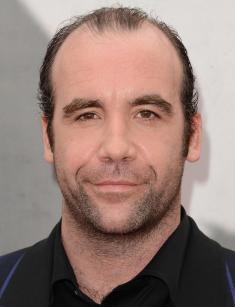 There are more than 30 works in feature films and TV series in the work of the Scottish actor, Rory McCann but the finest hour of this incredibly tall man came with the role of cynical and cruel Sandor Clegane from the TV saga Game of Thrones. Rory loves this image; however, his popularity makes him boring. In 2019, fans of the fantastic saga will enjoy the game of a talented actor, the owner of a bright appearance.

Rory McCann was born in April 1969 in the city of Glasgow. The man is very secretive and shares with journalists the details of his life reluctantly, so it is not much known about the early years of the actor. The boy grew up thin and short, so his peers teased him constantly. In his youth, he reached an impressive size; the growth of Rory is 6,5 feet (198 cm).

His excessive thinness led him to the gym in his childhood. His other favorite pastime was climbing. When the young man matured, classmates and friends gave him the nickname "big."

The star of TV screens studied at school, where he received the profession of the forester. Rory worked as a bridge painter, carpenter and even landscape designer. Once a young man was invited to star in an advertisement for porridge "Scott's Porage Oats".

He recalls with pleasure this episode in a funny video McCann appeared in the Scottish national costume. Such a colorful debut on television was the beginning of his career as an actor of British cinema and TV series because Rory met with representatives of the industry.

Rory McCann was seriously engaged in rock climbing and went into the mountains alone. His way to the acting profession began with this passion. Going to the next campaign, the man went together with familiar director Lynne Ramsay. She was so impressed by the exciting stories about the climbing feats of a friend that called and said that Rory is prepared for a small role in the new film six months later.

As the actor told, he cut down trees in the woods of an eye and didn't think of a career in cinema at that time, he tried to resist. However, the director insisted and the man starred in the film Ratcatcher (1999) in such a small role that was not even noted in the credits.

It was followed by occasional appearances in the films London's Burning, Pasty Faces, in TV projects Monarch of the Glen and Randall & Hopkirk. Rory began to get a taste and decided to link his life with the movie. He had a lot of offers from the creators of the films.

The first work, which brought the novice actor success, was a serial comedy The Book Group. Rory, who played a former disabled lifeguard, Kenny McLeod, received the BAFTA Award and the man was named the best television actor in 2002. He had another brilliant role in the television series Shameless. This movie received a lot of awards. Rory became a priest. There is even the role of Peter the Great in the TV movie Peter in Paradise in the artist's creative biography.

McCann's Hollywood debut happened in 2004. The brutal man appeared in the film Alexander directed by Oliver Stone. Rory tried on the image of Craterus, the leader of the foot guards in the army of Alexander the Great.

American directors continued to invite the artist to the shooting actively. Rory McCann was given a modest role in the blockbuster Clash of the Titans. The man met with Nicolas Cage, Ron Perlman on the set of the adventure film Season of the Witch.

A breakthrough in the cinematic career of Rory was in 201. He joined the crew of the fantasy major channel HBO Game of Thrones, based on the cycle of novels A Song of Ice and Fire of George Martin. The role of a cruel, ruthless killer with the tragic fate of Sandor Clegane (the nickname The Hound) brought to McCann world fame.

Rory managed to turn into a multi-faceted image of dangerous and robust Clegane: the bodyguard of Prince Joffrey with a frightening appearance, the winner of knight tournaments, an outcast, wandering the world, a noble knight and the savior of little girls.

He unlike many of the characters of the project managed to stay alive until the end of season 7. It is easy to understand that Sandor Clegane can break a man in half easily, but he is not alien and romantic features. Critics recognize that Rory turned into the ambiguous character.

Dozens of actors had the casting for the role of Clegane but George Martin chooses McCann. A defining moment for the choice was steel dimensions of a man: they looked for active and intimidating Clegane. And not only the appearance influenced the decision. The author of the saga shared his impressions of listening:

" I saw an exceptional, amazing Sandor in Rory. We had good candidates but none of them were up to him. The scene where Sandor tells Sansa Stark how he got his scars. At first, I was frightened (when he shouts: "Look at me!"), then laughed (when he says it's not a dragon fire), then tears came to my eyes (when he told his story). I suddenly realized it is real Sandor.…»

Rory carefully hides his private life from the public. The actor recently gave an interview at home, where he put everything on the shelves in order not to have too many questions. McCann said that he has no wife, children and mortgage, he is pleased. You can be sure that if he was married, the path to the actor's path would have been ordered:

"A wife is too hard. It would be necessary to work hard to provide the family with the proper material level. I am alone, I am not attached to anyone and I am glad that I have the opportunity to do what I want."

I can see beautiful women in work but a man considers 80% of them are "crazy" and tries to avoid close contacts with them. Rory never had an affair with an actress. He lives in two homes – in London and Glasgow, he dreams about his own castle. He has a powerful car X-Bow GTR in his fleet.

He recognized that work, sports training and hobbies take a lot of energy. He conquers the mountains. He lives on a yacht in the sea most of the year. It is difficult for Rory to tolerate his popularity, he even dreams of becoming invisible when fans meet their idol, shouting "It's The Hound!". He jokes that the boat rescues him from the obsessive attention of fans as soon as someone gets too close, he gets on a yacht and swims away.

Rory McCann is passionate about music from his youth, he sings and plays a lot of musical instruments, including the accordion and piano. However, he mastered nothing perfectly. The actor's house is filled with speakers, amplifiers and wires so that it is difficult to move.

Rory organized a musical group called "Brotherhood Without Banjos" on the set of Game of Thrones, in which the actors play and sing rock. For example, Carice van Houten (plays the role of Melisandre) is an excellent soloist and John Bradley (Samwell Tarly) plays the drums. After the project has the end, members of the group plan to record an album. Rory jokes:

"Our ambitions do not extend beyond concerts at premieres, parties on the occasion of the completion of filming or our birthdays. If you want to spoil your party, you can call "Brotherhood Without Banjos."

Now McCann is involved in the filming of the continuation of the fantastic saga, Game of Thrones. The eighth season is planned to be released in 2019.Rory McCann has an estimated net worth of $750 thousand.

Fans hope that he will meet again with Arya Stark and avenge his brother for injuries received from his hands in childhood. But the actor does not open the cards even slightly in an interview.