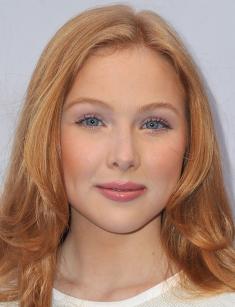 The American detective series Castle, the first season of which began on March 9, 2009 (the premiere in Russia was on September 20, 2010), brought the popularity too many young actors. It would be difficult to achieve such a success in another film because the popularity of the series is so high that the shooting its counterpart started in Russia in 2017. The producer of the Russian Castle was Yuri Sapronov, the film will contain only 34 series and the premiere date is still unknown.

The original American series consists of eight seasons, 9-12 million viewers watched each season. The extremely high ratings are based on the increased popularity of the actors.

Molly Caitlyn Quinn was born in on October 8, 1993, in Texarkana, USA. Molly grew and was raised in American and European cultures at the same time thanks to her Irish roots. The girl was only six years old when she was selected to participate in a theatrical production at school, based on the fairy tale of Ernst Theodor Wilhelm Hoffmann The Nutcracker. Soon a good half of the inhabitants of her small town watched Molly in the performance The Nutcracker.

Having appreciated all the delights of performing on stage, Molly decided to become an actress. A purposeful red-haired girl with Irish roots attended classes in a children's theater studio in elementary school. The director Martin Beck taught acting to the future actress.

Going to high school, Molly went to the casting in a specialized Young Actors Studio. The studio director Linda Seto, and a representative from the Osbrink Talent Agency appreciated the talent of the girl at the audition.

The casting was followed by six months of intensive training in acting and modeling. The girl learned to work in front of the camera, to be plastic and natural. Molly signed a contract with the Osbrink agency after six months of classes. And she signed with Management 360 six months later.

Working with model agencies, the girl got a few episodic roles in the crowd in little-known films and the name Molly was not even mentioned in the credits. In 2006, Molly went to the casting for the role in the family movie Camp Winoaka. Quinn played one of the main characters, the girl was noticed; it was the beginning of her future successful film career. However, fame never came to Molly. She was still an ordinary teenager.

It is possible that she managed to finish school thanks to the lull in the film career of the girl, unlike those actors, who achieved popularity in childhood. Nevertheless, the girl was distracted by participation in auditions and auditions, getting general secondary education.

So, Molly voiced the cartoon Winx Club and she was selected for the main role in the musical play Walk Hard: The Dewey Cox Story a little later. Molly's partner was the winner of the Oscar, Nat Faxon. Working with a professional actor, Molly gained invaluable experience in acting. Then Molly played the main character in the little-known short film The Sacrifice.

The first major work of Molly Quinn was a comedy My One and Only of Richard Loncraine. Playing a minor character named Paula, Molly gained experience from the famous Renée Zellweger, who played the main role. Soon the film became famous, becoming the winner of the Berlin International Film Festival and Hollywood filmmakers drew their attention to matured Molly.

A significant moment in Quinn's career was the casting for the role of the daughter of the protagonist of the detective television series Castle with Stana Katic and Nathan Fillion in the main roles. The girl coped with the role of Alexis Castle admirably, which was noted by both viewers and critics.

The actress had many offers to shoot from several directors after the role of Alexis. In 2010, Molly played Jenny in the fantastic family drama Stuart Gillard's Avalon High and the dramatic short film Finding Hope Now was released a year later, where Molly appeared in the role of Esmé Johnson.

In 2012, Molly Quinn starred in Jonathan Kasdan's comedy melodrama The First Time, telling a beautiful story about teenage love and friendship. Molly played a secondary role of the teenage girl Erica. Later, the film was awarded at the American Sundance Film Festival.

In 2009, Molly, who already had the experience in voicing cartoons, worked with Jim Carrey on the voicing of the family fantastic animated film A Christmas Carol.

And in 2013, Molly tried her hand at a new incarnation, becoming the executive producer of the comedy horror film Hansel & Gretel Get Baked. Quinn joined a team of producers on the rights of a full member and performed the first role of Gretel in her biography. Critics and viewers took the film cool but it collected $ 10.5 million at the box office.

In August of the same year, there was a world premiere of the criminal comedy Marshall Thurber's We're the Millers, where Molly played Melissa Fitzgerald. Quinn worked with the Hollywood stars, Jennifer Aniston and Jason Sudeikis.

Molly Quinn is still too young for marriage and family and she does not have a lack of male attention because of her bright, attractive appearance and slim figure (the actress weighs 116 lbs (53 kg) and she is 5,4 feet (165 cm) tall). Although she does not like to tell journalists and fans about the details of her personal life, the brisk paparazzi managed to shoot her in the company of her boyfriend at the premiere of the film Guardians of the Galaxy Vol. 2.

The actress published on social networks her joint photos. The girl admits her love and assures fans of her unearthly happiness in the comments to the pictures in the company of unshaven long-haired brunette named Elan Gale.

The actress travels in her spare time (Molly visited Copenhagen in early 2018 and visited Japan in December of 2017), she is skiing on the European and Asian ski resorts and reads modern literature.

In the spring of 2017, there was the premiere of the sequel to the fantastic adventure thriller Guardians of the Galaxy, where Molly played a small episodic role. The film is shot in the fantasy genre. It is difficult to recognize the actress under a layer of makeup, even for her family. The actress has a net worth of around $3 million.

In addition, on September 22, 2017, there was Dwight H. Little's drama Last Rampage: The Escape of Gary Tison with Quinn in the role of Marisa was released and there was the world premiere of the comedy-drama Newly Single two months later (was not duplicated for Russian hire) with the participation of Molly Quinn.

In addition to her career as a film actress, Molly continues to work as a model and posts her photos from her portfolio on her page on "Instagram" and other popular social networks.