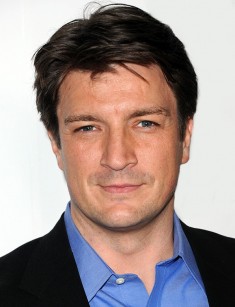 Viewers have loved Nathan Fillion after the release of the youth thriller Dracula 2000 and the cult TV series Firefly. The American actor turned into a Hollywood star having played the roles in the acclaimed projects Slither and Castle.

The actor was born in the spring of 1971 in Edmonton, Alberta, Canada. Nathan Fillion is of Irish and French-Canadian descent. According to the actor, one of his ancestors was the famous Confederate general, Jubal A. Early. Nathan's parents, Cookie and Bob Fillion, were English teachers at school.

Neither Nathan Fillion nor his elder brother Jeff chose the profession of a teacher or a military career. However, in early youth, the star of the TV series Firefly and Castle thought about teaching.

In an interview, Fillion admitted that in the 5th grade, he pretended to be sick not to write a math test. The parents believed him, and Nathan first made a profit on acting because he missed classes at the Catholic gymnasium.

Jokes are half-meant. As it turned out, the desire to play and become an actor laid dormant, until he became a senior student at the University of Alberta. Nathan heard about the auditions for a role in the soap opera and went to the casting. Fillion was cast from hundreds of candidates, and he got a secondary role in the melodrama One Life to Live.

Nathan Fillion dropped out of the university one semester before graduating and moved to the Big Apple and plunged into the world of cinema. Thus he began his acting career.

The career of the American actor developed rapidly. Two years after filming in the soap opera, Nathan was nominated for the prestigious Daytime Emmy Award for Outstanding Younger Actor in a Drama Series. But after three years of filming, Fillion was tired of a bit part. He was not satisfied with what had already been achieved. The actor went closer to the Dream Factory, to Los Angeles, where he attended auditions for other projects.

Nathan Fillion starred in episodes of several TV series for three years. The most famous projects of those years were the sci-fi film The Outer Limits, Steven Spielberg's military drama Saving Private Ryan and the comedy Blast from the Past, where Hollywood stars Brendan Fraser and Alicia Silverstone played the title characters. Fillion got bit parts, but the invaluable working experience with the famous masters was not in vain.

In 2000, Nathan Fillion played a priest in the drama thriller Dracula 2000 by Patrick Lussier. The actor appeared on the screen with outstanding colleagues Jonny Lee Miller, Gerard Butler, and Christopher Plummer.

It was a breakthrough role in his career. From then, he has become an in-demand actor who does not need to look for a job because directors always offer Nathan interesting projects.

In the autumn of 2002, the sci-fi series Firefly, directed by Joss Whedon, premiered on Fox. A year later, the space Western won the Emmy Award for Outstanding Special Visual Effects for a Series. Fillion got a leading role in the project. The following year, Nathan pleased his fans appearing as Caleb in the five final episodes of the youth series Buffy the Vampire Slayer.

In 2005, the science fiction film Serenity premiered. It was a kind of continuation of Firefly. The film directed by Joss Whedon shows the world where the characters of the project Firefly had previously lived. Nathan Fillion got the role of Captain Reynolds. In 2006, for his role of Sheriff Pardy in James Gunn’s thriller Slither, the actor garnered a Fangoria Awards nomination in the category of Dude You Don't Wanna Mess With.

2007 was fruitful for the Hollywood actor. Nathan Fillion played the title roles in the thriller White Noise: The Light, the comedy melodrama Waitress, the comedy-drama series Desperate Housewives and the drama action movie Drive. These projects have received a warm welcome from viewers and positive reviews from film critics.

Fillion earned the status of a movie star, but the actor had the dubious distinction as a "killer" of the series. Attentive viewers noticed that Nathan always participated in the season which later became final.

The series Castle dispelled the myth about the "fatal" role of Fillion. The comedy-drama series, where the actor played the title character, writer Richard Castle, aired for eight seasons and enjoyed great popularity with viewers. Stana Katic played the girlfriend of the handsome novelist, Castle. She also appeared in all seasons of the detective drama.

Castle premiered in the spring of 2009, and the final 8th season was released in 2016. The management of the ABC channel, broadcasting the series, announced the termination of the contract with Stana Katic.

Fans assumed that ABC refused to extend the contract with Katic due to budget cuts. But they were wrong. The actors who starred in the series told about the conflict between Fillion and his partner. According to them, Nathan and Stana quarreled for all the years of shooting together, and Katic ran out of patience.

While filming in Castle, diligent Nathan Fillion managed to star in other projects. In 2012, Joss Whedon’s comedy Much Ado About Nothing, where the actor played Dogberry, was released. In 2013, the fantasy adventure film Percy Jackson: Sea of Monsters premiered, and the Hollywood star appeared as the god, Hermes.

In 2014 and 2015, the actor played a cameo role in the fantasy action movie Guardians of the Galaxy and the sitcom The Big Bang Theory.

The personal life of the actor is a closed book. Colleagues and fans of Fillion speculate and retell rumors about the star's love affairs, but no one has reliable information about Nathan's romantic relationship. The actor carefully hides his personal life, does not comment on anything, and does not make a public appearance with his girlfriends.

Perhaps, the workaholic actor does not have time for relations due to the busy schedule (they say that Fillion works on the set 17 hours a day). Therefore, the star who is over 40 does not have a family, wife, and children.

In 2014, there were rumors in the media that Nathan Fillion would soon marry his colleague Cristina Ochoa. They starred together in the comedy series Modern Family. One of Fillion’s friends told journalists that the actor planned to go to Barcelona to ask Cristina’s parents for her hand in marriage. But there was no marriage and further information about the wedding.

Friends call Nathan Fillion the main gentleman of Hollywood. When the star goes for a walk, he always takes garbage bags and solvents to remove the graffiti from road signs. A cat lived in the actor’s house for a long time, but it could not use its hind legs. Fillion refused to put the animal down and made a unique stroller so that the cat could move.

Fillion is very nice to fans. He signs autographs patiently, even if he is in a hurry. Nathan gets along well with the children of his friends. The handsome man (his height is 1,87 m, and the weight is 93 kg) is an eligible bachelor. Fans predict him a happy marriage with the woman who succeeds in winning the star’s heart.

In 2013, the American sitcom Brooklyn Nine-Nine was released. It was highly rated and won two Golden Globe Awards. In May 2017, the fifth season of the series was announced. Fillion played Mark Devereaux in the sitcom.

Fans find out about the star’s career development in the photos on his Instagram page. 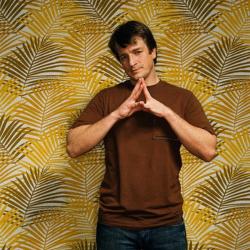