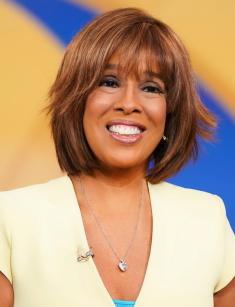 Gayle King is a popular TV host famous for the show CBS This Morning. Besides, the audience knows her as a writer, journalist, and columnist of O, The Oprah Magazine.

The would-be journalist was born in winter 1954 in Maryland. The girl’s father was a military man, so the family had to move when the man had to perform his duties. Little Gayle and her three siblings grew up in Maryland, the USA, and Turkey.

After graduation, the young woman continued her education at the University of Maryland, College Park; she studied psychology and sociology there.

The WJZ-TV channel in Baltimore became King’s first employer; she was a production assistant there and performed journalist’s functions sometimes. Thanks to this job, Gayle met Oprah Winfrey. Further on, the woman joined the WDAF-TV channel, becoming a weekend anchor. 1981 brought new employment at WFSB, where King anchored news programs; she spent 18 years with the company.

Fans also know Gayle as a talk show figure: she contributed to The Oprah Winfrey Show and Cover to Cover with Robin Wagner. Besides, the presenter launched The Gayle King Show in 1997; although it was shut down because of low ratings, the program re-emerged on the radio in 2006 and returned to the television form in for a year later.

January 2012 opened a new page in the screen celebrity’s life: she started collaborating with CBS This Morning. From the very beginning, King recommended herself as a fierce proponent of truth: when the channel was going to silence the sexual abuse information, she interfered and made it public.

In 2019, when the famous musician and Grammy winner R. Kelly got involved in the child molestation scandal, the journalist was the first to interview him. It was one of the hardest moments for Gayle; she remained calm while Kelly lost his temper entirely.

The TV presenter married the attorney Bill Bumpus in 1982. The couple had two kids together: the daughter Kirby and the son William. However, Bumpus was not a loyal husband: Gayle caught him cheating with her friend in 1990. The official divorce occurred in 1993.

Oprah Winfrey is Gayle’s best friend. The women’s relationship survived through many happy and dramatic moments, including the news about Oprah’s breast cancer scare.

In 2018, King released the book Note to Self: Inspiring Words from Inspiring People.

The celebrity is popular not only among TV viewers: more than 811 000 people follow her on Instagram, and the number of Twitter subscribers has exceeded a million. She often shares videos and photos with top stars, from Billie Eilish to Céline Dion.

Nowadays, Gayle King is in the center of the most discussed events. The rapper Snoop Dogg and she have been involved in a scandal following the journalist’s interest in the 2003 sexual assault accusations of deceased Kobe Bryant. The story began when King conducted an interview with the former basketball player Lisa Leslie; the musician reacted with an Instagram video: “Back off, bitch, before we come get you”. The CBS channel and many public figures, such as Senator Cory Booker, expressed their support of Gayle.

Some people accused the host of double morals, as she is still on friendly terms with her former CBS colleague Charlie Rose, who faced sexual misconduct charges, too. There are opinions that King is merciless to black men, while her attitude to the white ones is friendlier.

When Meghan Markle and Prince Harry revealed their intention to divest themselves of their official status, the royal historian Penny Junor suggested that some hidden factor, other than Meghan’s ill treatment, was the cause. King organized an interview with Junor and contradicted some of her statements.