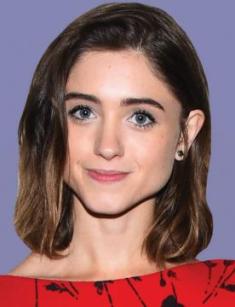 The American Natalia Dyer is not only known to the public as a promising actress of the series Stranger Things.

The girl with an attractive appearance also appeared in Prada commercial, to be more precise - in the whole mini-movie under the title Dreams of the postman about the Fashion House known to everybody. Even without this, the actress enriches her filmography every year, adding new short-length movies and full-length movies to her filmography.

Natalia was born in winter of 1995, on the 13th of January in the town of Nashville, in the southern part of the United States. After a while, the girl and her parents relocated to New York City, where she spent most of her youth. As a child, the girl suffered from ADHD and hyperactivity. Her parents learned about her disease in time and sent their daughter to a specialized school. There the teachers tried to find an individual approach to every child and even to the child with the most complex state, focusing on his inclinations and interests.

There little Dyer started to be interested in the performing arts and even enrolled in the local drama course. The saw the girl's efforts and aspiration. Therefore they allowed her to appear at the stage as often as it was possible. Already being a student of high school, Natalia, at last, realized that she wanted to be engaged in the stage activities professionally. She entered the New York University, on the Faculty of Arts.

The first movie in which Dyer played a role was Hannah Montana The Movie, which came out in 2009. She received the part of the character Clarissa Granger. At that period, the girl was 14 years old, but she managed to play the role successfully what became a good start to continue her career.

Next year, she took part only in the short-length movie, and in 2011 she again played a role in the full-length movie under the title The Greening of Whitney Brown. That time it was the movie directed by Peter Skillman. It is a family adventure movie that tells a story of the girl who at the age of ten, has a spoiled character.

Together with her parents, she moved from Philadelphia to some other state, and there she made friends with the amazing horse, on which she decided to return to her former house. As a result, she became aware of the fact that her real home was where her family lived. Natalia received an episodic role of the capricious girl Lily.

Dyer got the same little role of the bit in the drama entitled Blue Like Jazz in 2012, and in 2013 she played a role in the horror movie The Healer. The year 2014 was more fruitful for the girl, as during that period she was engaged in the shooting of two movies at once, the one which was a short-length tape.

However, in the second full-length movie I Believe in Unicorns directed by Leah Meyerhoff, the actress was invited to play the leading role of Davina. This character has an actively developed imagination; she often escapes from the problems to the colorful world full of fantasies. But the character had to grow up in a short time because she had to take care of her disabled mother.

Then in 2015, Dyer played a role in Chadd Harbold 's movie Long Nights Short Mornings, and in 2016 she appeared in the series Stranger Things. This series takes viewers to the 1980-s to the quiet provincial town. The disappearance under the mysterious circumstances of the teenager called Will breaks the favorable course of events in the local life.

The sheriff and the boy 's parents feel determined to find out the circumstances of their son’s disappearance. His best friend Mike starts his investigation together with them. He is sure that he is close to disclose the secret of his friend's disappearance. Now he has to appear in the epicenter of the violent battle between the other sides.

The multi-series movie of Netflix studio had a real furor and presented several talented actors to the public, including Finn Wolfhard and Millie Bobby Brown. Also, Winona Ryder, David Harbour, Charlie Heaton, and Joe Keery worked with them on the same movie set.

Natalia in this movie received the role of the supporting character Nancy Wheeler, Mike's elder sister. She and her boyfriend unwillingly became the witnesses to the murder of their friend Barbara, and this happened under some paranormal circumstances.

To get into the role the best way possible, before the beginning of the shootings, the girl realized her investigation. She knew about the times of the 1980s only from her parents’ stories. To understand the atmosphere of the previous years, she looked through her mother’s albums, listened to the music of the old bands, watched popular shows of those years. The rest of the cast took efforts as well as Natalia, and their work was rewarded by the fact that they received many prizes, including the Golden Globe.

After Season 1 of the series came out, the management of Netflix TV channel prolonged it for the second season. It was premiered on the Halloween Eve, in October of 2017. If earlier there weren't so many episodes with Dyer, now she has more time on the screen. It's precisely after these broadcasts that the girl's number of admirers has significantly increased.

During the breaks between the shootings in the series, in 2016, Natalia managed to appear in the feature movie, and 2017 in two more movies. In a year she received a leading role one more time. That time it was the role in the fantastic thriller After Darkness. Kyra Sedgwick, Tim Daly, and Valorie Curry played other significant characters in the movie.

The admirers and paparazzi observe with attention the personal life of the young actress. After the release of the first season of Stranger Things there began to appear the rumors about the love affairs of the girl with her colleagues on the movie set.

Later she was told to have relations with Joe Keery, which she neither denied nor approved. Then there appeared the gossips about her affair with Charlie Heaton.

After that, there appeared the joint photo of the couple from the vacation in Spain. It became known that young people have been in relations since January of 2016. At present, it's a secret what is happening between the artists. Dyer doesn't have their photos together on her Instagram, but Heaton has such a shot in his profile. He posted this photo in 2018.

The fans of the TV series often discuss the actress’s body on the web, namely - her slender figure. And indeed, she looks very tiny at the photos. Having a height of 163 cm, the girl weighs 48 kilos. To prevent excess comments, Natalia doesn't post photos in a swimsuit in the social networks. She also doesn't have pictures without makeup, but there are those where she has light make-up, and you can see her natural beauty.

Dyer regularly appears on the TV screens. At the beginning of July 2019, the girl appeared in the third season of the series Stranger Things, the shootings of which had been planned by Netflix channel in December 2017. At the same time, there was announced, that the series would be released in 4 or 5 seasons.

In the new episodes, the viewers saw, how Soviet military men tried to open the gateway to the parallel dimension, and this failed. Then the actions are transferred to the next year, and the same characters are in the center of the plot. On the course of the plot, the events of their lives are intertwined with the earlier described events.

The same year Dyer appeared in the movie Velvet Buzzsaw of Dan Gilroy.

At present, Natalia has a net worth of $2 million.