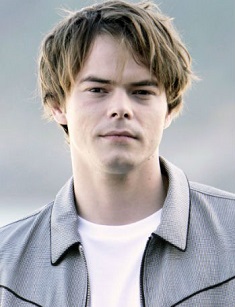 Charlie Ross Heaton is an English actor and musician. Charlie has played as a part of such bands as Comanechi and Half Loon. As an actor, he is mostly known for his role of Jonathan Byers in the Netflix series Stranger Things.

Charlie was born in England in 1994. The information about his parents is unknown, but he certainly has an older sister, Levi Heaton, also an actress who starred in the film The Limehouse Golem and television series McMafia. Heaton’s parents did not live together, and Charlie always missed his father.

When Charlie was a kid, he never thought about acting; he always wanted to become an entomologist. Well, sometimes life gives us some surprises.

At the age of sixteen, Heaton moved to London to live with his father. There, he became a part of a noise-rock band named Comanechi as the drummer and had a tour with this group for more than a year. By the way, it was when Heaton met Akiko Matsuura with whom he would have a baby together. Then, Charlie joined the psychedelic rock band, Half Loon.

The interesting fact about Charlie’s acting career is that it was not in his life plan. After his music career, especially, after the tour with Comanechi, Heaton understood that he got no money. His sister, Levi, offered him to sign a contract with some agency to earn some. His first job was a commercial for a Swiss insurance company.

That is how Heaton’s career suddenly started. Look, what the actor says in one of his interviews:

“I had no idea what I was doing when I started, but sometimes that helps,” says Heaton. “I’ve had great feedback, and that builds your confidence; more than anything I know this is what I want to keep doing.”

However, music has never gone out of Charlie’s life. He uses music a lot when he is on set; it calms him and gets him in the right mood for shooting.

Since 2015, Heaton started appearing in some movies and TV shows. His debut in acting was the role of Gary McCready in the crime series DCI Banks (2015). A year later, he starred in the thriller film Shut In together with Naomi Watts and Oliver Platt.

The most significant breakthrough of Heaton’s career came after he was cast as Jonathan Byers in the series Stranger Things. Charlie sees a few similar features between him and his personage; they both have a great sense of family, some musical relation and also these guys are introverted in a little bit different ways. In the series Heaton plays the role of the son of Winona Ryder’s character (Joyce Byers); the actors became rather close. Winona teaches the young actor a lot, shares her experience.

In summer 2019, there will be a new horror movie released, The New Mutants, created by Josh Boone. Charlie’s personage is Sam Guthrie / Cannonball. In 2018, it was announced that Heaton also would star in the BBC’s adaption of The Elephant Man, although, the date of release remains unknown.

Heaton has a net worth of $3 million which he gets from his acting career that, we think, will develop more and more in future.

People usually see Heaton and think that he looks like Leonardo DiCaprio. Well, we cannot argue with that; they certainly have some similarities. Besides, Charlie also has something in common with Kevin Bacon and River Phoenix; they are also actors. Well, Heaton has not only a beautiful face; you can notice him shirtless in one of the Stranger Things episodes.

Speaking about the actor’s love life, Heaton has been dating Akiko Matsuura, who is also a musician. They have met in the music world, in the band Comanechi. In 2014, they had a kid together, and for now, they are separated but remained friends. Charlie's son Archie lives with Akiko in England, and the actor is often in Los Angeles because of the shooting for Stranger Things. However, he goes to London to see his child every time he has an opportunity.

At present, Heaton’s girlfriend is his colleague, Natalia Dyer, who plays Nancy Wheeler in the Stranger Things. That is really sweet: these two have taken their on-screen romance into real-life. Charlie appreciates that he works together with his girlfriend, because, as he says, it is always more supportive and better in all ways to share one field of activity with your partner.

At the beginning of 2017, Natalia and Charlie were noticed cuddling at the airport in Los Angeles. Then, in December 2017, they made their red carpet debut as a couple at the “Fashion Awards” at Royal Albert Hall in London. The actor is not so open about his personal life, and even on his social media profiles like Instagram and Twitter, we cannot see any intimate photos.

Instead, look at the photo below. The pair attended the premiere of Velvet Buzzsaw, the film where Natalia starred. We can notice that these two are very fashionable. Dyer is wearing Christian Louboutin’s naked bow pumps, and Heaton has the Dior outfit.

Charlie Heaton and Natalia Dyer at the premiere of the film Velvet Buzzsaw in Hollywood, 2019

What’s funny is that there were rumors (and we guess, some fans are still not losing hope) that Heaton is gay and something is going on between him and his colleague, Joe Keery who plays Steve Harrington in Stranger Things.

Well, a lot of celebrities have some legal issues, rather often connected to drugs. Heaton is not an exception. In 2017 in the Los Angeles International Airport, he was not allowed to enter the United States, and the actor was deported back to the United Kingdom the same day. As Charlie arrived into the U. S., the authorities found cocaine in his luggage. However, Heaton was not arrested but got detained, and that is why he missed the premiere of Stranger Things 2.