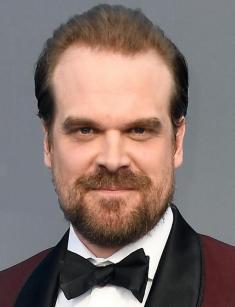 In 2019, David Harbour will make a breakthrough in the movieland because the American actor, formerly known mainly for minor TV roles, will portray the son of the demon, Hellboy. In the reboot of Guillermo del Toro's classic movie, the man will have to fight against the Queen of Blood, an ancient medieval witch who is eager to destroy humanity.

David Kenneth Harbour was born on April 10, 1975, in White Plains, New York, in the family of real estate agents Kenneth and Nancy (née Riley). The mother worked in the residential sector, the father in the commercial.

There is little information about the childhood of the future actor. The boy studied at Byram Hills High School in Armonk, New York. His classmates were the star of the series Firefly, Sean Maher, and Israeli Eyal Podell, who starred in Bones, The Mentalist, Charmed.

In 1997 he graduated from Dartmouth College, one of the most prestigious Ivy League universities in Hanover, New Hampshire. The young man studied dramatic art and Italian. He was a member of Sigma Phi Epsilon fraternity, the largest student community in the USA. Harbour still considers such fraternity’s principles as Virtue, Diligence and Brotherly Love to be his motto.

Harbour made his stage debut in 1999. The young American went to the Broadway stage in the production of The Rainmaker by Richard Nash, then played waiter Mike in the detective series Law & Order (Episode: “Patsy”).

Over the following years, David Harbour appeared in the spin-offs of Law & Order. So, in 2002, he played a pedophile and killer in Law & Order: Special Victims Unit (Episode: "Dolls"), in 2004 and 2009 he appeared in Law & Order: Criminal Intent (Episodes: "Silver Lining" and "Family Values"). In 2008, he returned to Law & Order in the episode "Submission."

After a series of television projects, the American first appeared in a full-length movie, the biographical film Kinsey, in 2004. The movie tells about scientist Alfred Kinsey (Liam Neeson), who investigated the male sexual behavior. Harbour played a bit part of Alfred's brother, Robert Kinsey.

The actor played Randall Malone in the 2005 film Brokeback Mountain about the love between two men. Harbour’s hero is a married man who has sex with men, and Jack Twist (Jake Gyllenhaal) receives an indecent proposal from him. The same year, the American played a bit part in War of the Worlds based on the novel of the same name by H. G. Wells and was nominated for a Tony Award for his performance in a production of Who's Afraid of Virginia Woolf?.

In 2007, Harbour played in the thriller Awake with Hayden Christensen and Jessica Alba in the leading roles. The film tells about a rare phenomenon - anesthesia awareness. A person wakes up during the surgery but is unable to say it and has to endure the pain.

The following years brought David some prominent roles: CIA agent Gregg Beam in the Bond series, Quantum of Solace (2008), Shep Campbell, a friend of Frank (Leonardo DiCaprio) and April (Kate Winslet) Wheeler in Revolutionary Road (2008). The American did not forget about television, starring in Lie to Me (Episode: "The Better Half"), Elementary (Episode: "Lesser Evils").

Over time, Harbour’s roles in the series became more prominent. His hero, MI5 agent Roger Anderson, appeared in the detective Pan Am for six episodes, news presenter Elliot Hirsch pleased viewers in the TV series The Newsroom for ten episodes, David Patrick, White House Chief of Staff, was in State of Affairs for 13 episodes. But the most exciting TV project in the American filmography is Stranger Things. The science fiction series premiered in July 2016.

The story begins when a 12-year-old boy, Will, has disappeared. His mother Joyce (Winona Ryder) seeks the help of Sheriff Jim Hopper (David Harbour). After the death of his daughter, Jim began drinking too much alcohol, divorced his wife, and the search for a boy is one of the ways to overcome protracted depression.

Will's classmates also cooperate with them. The boys meet a girl, Eleven (Millie Bobby Brown), with psychokinetic abilities. She knows little what happened to their friend. It turns out that Will has been kidnaped by a secret government organization that has created a portal to an alternate dimension.

The Duffer Brothers kept close track on Harbour’s career development for a long time and noticed that the man "had waited too long to have the opportunity to play a significant role." As soon as they had the idea of the series, the actor was invited to the project. Winona Ryder was also cast without attending the audition.

Now Harbour's income has increased from $ 80 thousand to $ 350 thousand per episode. Besides, the man is a runner-up among the actors in terms of nominations. He was nominated for ten awards (Millie Bobby Brown for 25 awards). The actor won three awards: the Screen Actors Guild Award in 2017, Critics' Choice Television Award and Gold Derby Award in 2018.

While filming in Stranger Things, Harbour played the bit part of Dexter Tolliver in Suicide Squad in 2016. In May 2018, it became known that the actor would appear in the superhero film again and play Hellboy.

The famous Hollywood fitness expert, Don Saladino, helped Harbour to build muscle mass. The actor worked 5-6 days a week for nine weeks but did not achieve the desired result. Harbour said that he would not dare to post his half-naked pictures on Instagram.

The continuation of the superhero story Hellboy will be released in April 2019. Nimue, an ancient medieval British sorceress (Milla Jovovich), will fight against the demon.

In early 2018, Harbour appeared at the BAFTA film awards ceremony together with Alison Sudol, the actress who performed the role of Queenie Goldstein in the Fantastic Beasts films. The lovers did not make official statements about their relationship, but they have appeared together at many events. There is information that the American had a wife. If that is true, then they did not have children.

David Harbour suffers from borderline personality disorder. In 2000, the novice actor experienced a maniacal episode due to alcohol abuse and passion for Catholicism. He sincerely believed that he had a "direct connection with God."

The American said in an interview that during the period when the disease progressed, he did not use drugs and struggled with alcohol cravings. Psychotropic medications were useless because David could see angels in the room if he really wanted to do it.

In the end, the parents sent their son to a psychiatric hospital, where he was diagnosed with borderline personality disorder. Harbour regularly takes meds and treatments to prevent progressive disease.

The actors will portray partners and mercenaries who go to Bangladesh to stop the war between two drug barons. Harbour will shoot in the movie immediately after the premiere of Hellboy in April 2019.