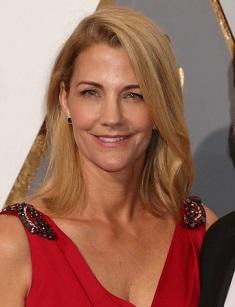 Nancy Ellen Carell (née Walls) is an American actress and comedian who is mostly known for her work in the television series The Office and The Daily Show. She is also the co-creator of the comedy series Angie Tribeca that she made together with her husband, Steve Carell.

Nancy Walls (Carell) was born in 1966 in Massachusetts. Her parents’ names were Robert and Carol. Nancy also has a sister, Tish Vivado, who, by the way, at present manages the Marshfield Hills General Store in Massachusetts that is owned by Nancy and her spouse, Steve. The Walls family was very friendly and loving, so Nancy gives a lot of care and love to her own family now – to her husband and kids.

The actress attended the Cohasset High School, and, then, she went to the Boston College, where she graduated in 1988. In college, Nancy was a part of the improvisational troupe, My Mother’s Fleabag.

Nancy’s career started from the participation in the comedy troupe, The Second City. After that, she began appearing in movies and TV shows. In 1995–1996 she was a member of the cast of the live show Saturday Night Live (SNL), where Carell represented a lot of famous people like Martha Stewart, Sharon Stone, etc. and sometimes reported Weekend Update news. Her most known personification is Bobbie Battista, a CNN anchor. In 1999–2002 Nancy appeared almost in 100 episodes of the satire TV program The Daily Show, which we can call the beginning of her fame.

Since 2003 the actress has started appearing in movies. She had her debut role in the film Anger Management in 2003, and then, in two years she starred in the romantic sex comedy The 40-Year-Old Virgin (2005) together with her husband Steve who had the leading role of Andy Stitzer. In 2009, Nancy voiced over the character of Helen Goode in the animated series The Goode Family.

During some years Carell also has been starring in the television sitcom The Office, she appeared in seven episodes. This series has won a lot of awards, including five Emmy Awards. By the way, Nancy’s The Office character, Carol Stills, was a girlfriend of Michael Scott, the personage that was played by Steve Carell, in the second and third seasons. Besides, the pair has appeared on some shows including The Daily Show that we mentioned before.

In 2012, Nancy starred in the romantic film Seeking A Friend For The End Of The World together with Steve Carell and Keira Knightley.

In 2016, there was the premiere of Angie Tribeca, the comedy series that was created by Nancy and Steve together. It is the parody of police crime drama genre. The leading role of Angie Tribeca belongs to Rashida Jones. Nancy appeared in the series a few times as Katy Perry.

Well, as we see, Nancy has not appeared in loads of project. However, as Nancy says in one of her interviews, she will make her career the priority only after she raises her children.

Carell has a net worth of $400 thousand, and her husband’s net worth is $50 million.

Nancy met her husband, Steve Carell, at The Second City Training Center that was connected to the theater in Chicago. Steve was Nancy’s teacher at the improvisation class. Then, a young student and an experienced teacher found each other. It took a few weeks to gather up their courage to go out on the first date. That’s what Steve said about the beginning of their relationship in the interview with Ellen DeGeneres in 2015:

The pair have been married since 1995, and they are together both on and off the screen. Their wedding was in Massachusetts, and the weather was extremely hot while there was no air conditioning in the church. However, the pair claim that it is the best day for both of them. Nancy and Steve have two children together: Elisabeth Anne (born in 2001) and John (born in 2004). By the way, Nancy’s husband is also from Massachusetts; they like spending free time in their native state where they can escape the public eye.

The relationship between Nancy and Steve become stronger and stronger. The pair works together in the entertainment field; they also own the Marshfield Hills General Store, where they sell fruit preserves and jams, clothes like T-shirts and sweatshirts and so on, and the series Angie Tribeca. In one of the interviews, Steve says that they both suddenly came up with this idea of series. Firstly, they invented the name – Angie Tribeca – and could not stop laughing, and that was the beginning. By the way, at the end of 2018, it was announced that the fourth season would be released. Speaking about Carell’s store, they bought it in 2009. Steve admits that the purchase of this store was not the best investment, but he does not regret it, because the store is situated in Massachusetts, both partners’ native state, and it gives them more opportunity to spend some time with their families at home.

At the significant events the spouses always appear together, and they both give their preference to the classic style: Steve wears suits, and Nancy likes strict dresses of nude, calm colors.