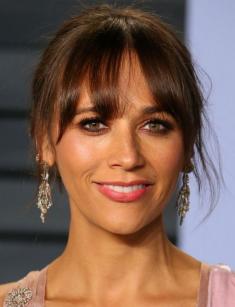 Rashida Jones is an actress, producer, screenwriter and comic book author, who won the hearts of viewers as Ann Perkins from the sitcom Parks and Recreation, as well as roles in the TV series The Office and Angie Tribeca.

Rashida Leah Jones was born on February 25, 1976, in Los Angeles, California. Her parents are a star duet: her mother is an actress Peggy Lipton, her father is a music producer Quincy Jones. Rashida has an older sister, Kidada and five half-brothers and sisters. The girl attended The Buckley School in Sherman Oaks with such students as Kim Kardashian and Paris Hilton.

Jones quit the Jewish school at the age of 10 and never took the religious adulthood of a girl when she becomes responsible for her actions).

"I'm Jewish of two races (my mother is Jewish and my dad is African-American), I got permission to explore any culture corresponding to this," Rashida said in an interview.

The girl grew up in Reform Judaism. The actress learned about her relatives, who were killed during the Holocaust in one of the episodes of the famous show Who Do You Think You Are. Jones commented:

"I'm lucky to be alive. There were many reasons not to be here now, as a descendant of slaves on my father's side and now on my mother's one. Looking at our lopsided family tree, I feel like a miracle."

Rashida graduated from Harvard University in 1997, where she studied religion and philosophy, she was actively engaged in singing and acting too. The actress returned to the University in 2016 to make a speech at the lesson.

By the time she graduated from Harvard, Jones received her first television role in the dramatic mini-series The Last Don, which marked her debut in the movie. She worked on several small projects before accepting an episodic role in the law television series Boston Public in 2000.

Her character Louisa Fenn appeared in 26 episodes, which helped the young actress to express herself before the American audience and move on to the next step. Rashida was nominated for the NAACP Image Awards for her role. However, Jones appeared in several series that many might not have seen: NY-LON (2004), Stella (2005) and Wanted (2005) before her career took off.

In 2006, the actress made the next big step, having the role as Karen Filippelli in a comedy series The Office. The character appeared for six seasons periodically and her part-time work allowed Jones to take the role of Ann Perkins in the sitcom Parks and Recreation that became her visit card in 2009.

With the success of the series, Rashida surrounded herself with many projects and appeared in several other shows, including the comedy series Web Therapy and the cartoon The Awesomes. Jones reached another milestone in her creative biography in 2015, when she became the main character of the series from TBS Angie Tribeca. The show, which is a satire on the police procedural genre, was created by Rashida's former colleague Steve Carell together with his wife Nancy from the movie The Office.

On September 21, 2016, the 3rd season of the satirical series Black Mirror was released, consisting of 6 episodes. Rashida Jones together with Charlie Brooker acted as the screenwriter for the first series under the name Nosedive. She also worked as a director and screenwriter, making a documentary Quincy about her father, which was released in 2018.

Rashida Jones sent her forces on the big screen, adding to her filmography feature films: Brief Interviews with Hideous Men (2009), I Love You, Man (2009), The Social Network (2010), Our Idiot Brother (2011), The Muppets" (2011) and others. The girl wanted to quit her acting career before she got the role in the TV series The Office. Moreover, she never dreamed of becoming an actress.

"I never considered acting a profession in primary and secondary school. I wanted to be a president, a judge or a lawyer," Rashida said.

Rashida Jones had affairs with several famous people, in particular with Tobey Maguire, Jon Favreau, the music producer Mark Ronson (who was almost Rashida's husband, the couple got engaged in 2003, and then broke up next year), as well as with a colleague from The Office John Krasinski. The actress has no children from her former boyfriends.

On August 22, 2018, Jones gave birth to her first child, the son of Isaiah Jones Koenig. She brings up her son together with her musician boyfriend Ezra Koenig. The couple began to meet in 2016 and concealed from the public both the fact of their relationship and Rashida's pregnancy. She is older than her chosen one by eight years.

In addition to acting, Jones participates in several charitable organizations. Besides, Rashida work as a political activist, especially with a movement against sexual harassment called "Time's Up."

Rashida Jones is an active user of social networks. She has more than a million subscribers on "Instagram." She puts different content on her profile both beautiful photos in a swimsuit and funny and ridiculous shots from her personal life.

In 2018, two full-length projects with the participation of Rashida were released, the actress voiced the fantastic melodrama Zoe and the comedy Tag, as well as two cartoons White Fang and The Grinch. Rashida Jones has a net worth of $25 million.

Several animated films with the participation of Jones are preparing for release in 2019: Klaus, Spies in Disguise and B.O.O.: Bureau of Otherworldly Operations.