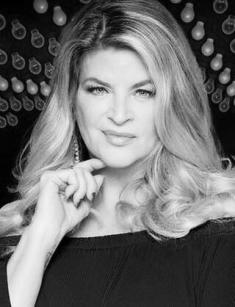 Kirstie Louise Alley who was born on January 12, 1951 was an American award-winning television and movie actress. She gained fame after appearing as Rebecca in the legendary situational comedy "Cheers". Alley was also known for portraying the lead character in the comedy show "Veronica's Closet".

The actress hails from Wichita, Kansas. Her father, Robert, was a business owner. Kirstie's mother, Lillian, was killed in a car crash when the actress was very young. The mother and the daughter had a strained relationship, but Lilian's death still deeply affected Kirstie. Alley also had a brother and a sister.

The future Cheers star was a troubled teenager. She enrolled at a university, but eventually abandoned her studies and relocated to California, where she realized she was interested in pursuing an acting career.

Kirstie's first major success was appearing as Saavik in the second movie in the Star Trek series. Shortly after that, the actress was cast on the espionage series Masquerade, where she worked for a year. After a string of appearances in small movies, Alley became a part of the hit sitcom Cheers cast.

In 1989, the star appeared in the romantic comedy Look Who's Talking. Bruce Willis played the voice of Kirstie's character's baby in that movie. A year later, she starred in the black comedy Sibling Rivalry with Bill Pullman and Carrie Fisher.

From 1997 to 2000, the actress was a regular on the NBC situational comedy Veronica's Closet. She also worked as a series producer.

In 1999, she appeared in the comedy movie Drop Dead Gorgeous. It was a satirical take on beauty pageant contests.

Alley's final work on television was appearing as Baby Mammoth on the show The Masked Singer.

In 1970, Kirstie wed Bob Alley. She and her husband met when they both were teenagers. Their marital union came to an end seven years later. The star's second marriage was to The Hardy Boys alum Parker Stevenson and lasted for 14 years. The couple has two adopted kids.

On December 5, 2022, it was announced that the Cheers actress passed away. Her cause of death was revealed shortly after that as colon cancer. Many of her co-actors and friends, including Ted Danson, Leah Remini and John Travolta, expressed their condolences to Kirstie's family.

From 1978 to 2020, Alley appeared in over seventy movies and TV series. Her selected filmography includes:

In 1991, the Alley became a Golden Globe Awards winner. She also won two Emmy Awards for her work on "Cheers" and "David's Mother" and earned two People's Choice Awards.