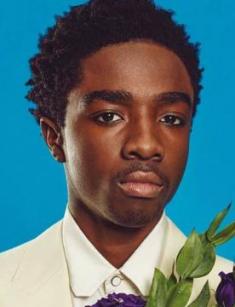 Young actor Caleb McLaughlin does not have an extensive filmography, but he is rapidly achieving world fame. He has already taken the first step towards fulfilling his goal. Caleb appeared in the acclaimed TV series Stranger Things, which had pleased the fans of science-fiction films for several seasons.

Caleb was born in the autumn of 2001 in Carmel, Putnam County, New York. The boy spent his childhood there, attended Kent Primary School, and then studied at George Fischer Middle School for one year. The boy went to a dance club in his hometown for a while.

The parents soon noticed their son's talent, so after the 5th grade, they allowed him to move to New York and then enter The Harlem School of the Arts under Aubrey Lynch.

Caleb made his acting debut on the theatre stage in 2012. The 11-year-old teenager portrayed young Simba in the Broadway production at the Minskoff Theatre in New York City, where he performed for two years. The talented work of McLaughlin attracted the attention of filmmakers, and in 2013 he was first invited to play in a film.

It was the TV series Law & Order: Special Victims Unit. The story tells about a special unit where detectives work. They investigate sexual crimes. Each new episode demonstrates confusing events, but each time, justice prevails. Caleb got a bit part and appeared in only one episode, but that was enough to understand the shooting process, and generally allowed to see it from the inside.

Since then, McLaughlin began attending audition hoping to land a role again. These attempts were not in vain because, in 2013, the young man was invited to play the older brother of one of the heroes in the American detective series Unforgettable, based on the story by J. Robert Lennon.

In 2014, the filmography of the young actor included the television series Forever, in which he had the opportunity to portray a young man named Alejandro. The plot focuses on Dr. Henry Morgan, a successful medical expert who has a secret.

He first died at the age of 35 but returned to life at the same age. Later, this story repeated several times until the hero was 236 years old. This film cannot be called successful. Even though it attracted viewers, the series did not get a lot of views and therefore was closed after the first season.

Caleb began to look for new projects, and he was lucky. The young man was invited to play the role of Jay-Jay in the film Shades of Blue. Jennifer Lopez portrayed the title character of Detective Harlee Santos. She is also a single mother who has become involved in the dirty business of her boss due to the constant shortage of money. But FSB arrested the woman receiving bribe money from criminals and offered her to become their deep cover agent. Now she faces a difficult choice.

Then he immediately appeared in the TV series Blue Bloods. Donnie Wahlberg, Bridget Moynahan, and Will Estes worked on the same set.

Although McLaughlin played only a supporting character, the project is considered to be his first significant work on television. In 2016, it was followed by an even more prominent role. It was the TV series Stranger Things, starring Winona Ryder, Finn Wolfhard, David Harbour, and Millie Bobby Brown. Caleb played Lucas Sinclair.

The American science fiction film premiered in the summer of 2016. It was created by the Duffer Brothers and sponsored by Netflix. The action takes place in the 1980s in a fictional city. A girl escapes from a secret government laboratory, and at the same time, a child disappears mysteriously in another place.

A local sheriff, his relatives, and friends go and seek the boy. During the investigation, they got into situations that defy logical explanation. Caleb has played a friend of lost Will.

The Duffer Brothers’ project was warmly welcomed. The Netflix management decided to release the second season, having seen its success. It premiered in October 2017, and the cast remained the same.

The season is set in 1984; some time ago, the characters killed the monster from an alternate dimension, but not everything is as it seems. For nine episodes, they try to return to normality after the events of the first season.

Having successfully played in the film, McLaughlin appeared in a mini-series in 2017, and then in a short film. In 2018, the young man was invited as a voice actor in the fantasy cartoon, and then he voiced a character in Summer Camp Island. At the same time, the actor began shooting in the drama High Flying Bird directed by Steven Soderbergh. The movie premiered in January 2019.

Despite his young age, Caleb's fans are often interested in his personal life. However, there is no reliable information about his girlfriend on the Internet. The young man focuses on his career. But in his free time, he tries to play sports, preferring basketball. His physical form allows him to show good results in this sport, albeit at an amateur level (his height is 5.74 ft. (175 cm), and his weight is unknown).

McLaughlin communicates with fans on his Instagram account. He regularly posts new photos of himself and his colleagues on the set, as well as personal photos, for example, of his mother.

Caleb continues to develop his acting career. In the summer of 2019, fans of fantasy movies got one more surprise from Netflix, which began working on the third season of Stranger Things as early as December 2017.

In addition to the well-known characters, the new season shows the Soviet military officers who want to open their own portal in a parallel universe. Their idea fails, and the general tells to execute a scientist and postpone the test run. A year has passed since those events, the former characters live a normal life, but one day Dustin intercepts the secret military message accidentally, using his hand-made radio station, and has dangerous adventures again.

Caleb McLaughlin has a net worth of $3 million.