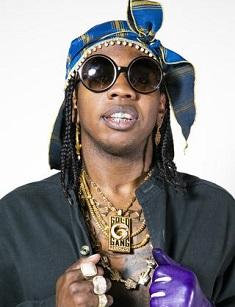 Nicholas James Williams, better known by his stage name Trinidad James, is a Trinidadian-American rapper. He is currently a host of the talk show “Full Size Run” on YouTube. Williams has also starred in several movies and TV series like Pitch Perfect 3 (2017) and Independent (2017).

Nicholas Williams was born in 1987, in the Republic of Trinidad and Tobago. As a kid, he has been moving a lot with his family: they left Trinidad, went to Canada, then came back to Trinidad, and after that, they lived in New York, Florida, and Atlanta. By the way, Williams cannot remember anything about his life before the age of seven due to a head injury that he got when he fell on the stone steps in Trinidad.

In November 2011, Williams started his way to success, and soon after that, he became a celebrity. His inspiration was Jay-Z, Cam'ron, T.I., and Young Jeezy. By the way, one of Trinidad's friends is DJ Looney, who is also his colleague and helps James with music.

In 2012, he released his first official single All Gold Everything, and it was included in the 40 top songs of the US Billboard Hot 100. This song was the most popular in the album Don't Be S.A.F.E., another noticeable track is Sneaky Vs. Selfish. Also that year, it was announced that James signed with the record label Def Jam Records, but in two years he left the company. Besides, Trinidad planned to release his new album with Def Jam Records, but they did not, so James announced that it would be released for free and that people who contributed to the project would not get any compensation.

After he got dropped from the label, the appearance of James started changing: the hair got braided, the teeth were fixed. If you look at his teeth before and after, you will see what gold crooked teeth he had earlier.

During the end of 2013, Trinidad’s fame became weaker, mostly because big rappers such as 2 Chainz, Drake, and Pusha T released albums and that caused a shadow over James. In 2014, James created together with August Alsina the single I Luv This Shit. Next year, the rapper made a remix on the song Uptown Funk! by Bruno Mars. In spring 2016, James released the song Just a Lil' Thick (She Juicy) together with Lil Dicky and Mystikal.

On the 2016 New Year, the rapper posted his mixtape called The Wake Up 2 on various streaming services like Spotify. In June 2018, he released a single M.M.M. (Marilyn Maryland Marilyn) and also uploaded the music video, directed by Mike Marasco, to YouTube.

At present, James is a host on a YouTube talk show “Full Size Run." James has a net worth of $ 2.5 million. He is the most famous rapper among recent hip-hop artists.

Speaking about rapper’s love life, it remains mysterious and unknown, although it is known that in 2013, James dated Niykee Heaton, a singer who is seven years younger than he is. Currently, the artist is single.

Trinidad’s success is evident: the rapper has been on the spotlight since 2012, and he has already released nine albums.