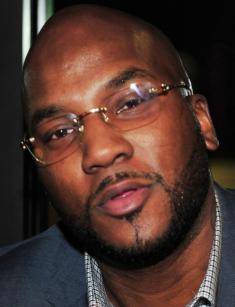 Jay Wayne Jenkins (Jeezy) is an American famous rap singer and actor. In his career, Jeezy succeeded to collaborate with such stars as Kanye West, Big Meech, Samurai Azide, Gas Monkey and many others. Some of the musician’s top songs are «Everything», «J.E.E.Z.Y (The Lady Across the Street)», «Round Here», «Real As It Gets» and «In The Club.»

Young Jeezy was born in Columbia, South Carolina, the United States on September 28, 1997. When he was an infant, his family changed the place of living – they moved to Atlanta, Georgia. At an early age, the rapper went through his parents’ divorce. He was torn between mother and father: couldn’t choose with who to stay. Eventually, Jeezy began living with his grandmom. However, he kept in touch with his relatives who were drug traffickers. They gave him pocket money, and as a result, he also became involved in it. At the age of 12, he started selling drugs in his district. In 1994 Jenkins was arrested and accused of cocaine selling. He passed nine months in YCA (Youth Challenge Academy), a boot camp in Fort Stewart, Georgia.

His career started in 2001 when he released his debut album called «Thuggin’ Under the Influence (T. U. I.)» under the nickname Lil J. That time the musician was inspired by artists Freddy J., Kinky B, Fidank, and Lil Jon and used their styles in his singles. They helped him produce his songs. 2003 was marked by releasing of Jeezy’s «Come Shop wit Me», a two-CD set featuring new tracks along with some songs previously released on TUI. Later the rapper got acquainted with Bad Boy Records, and they signed a deal in 2003. Besides, Jeezy joined the band Boyz n da Hood. Their self-titled album was released in June 2005 and reached No. 5 on the album chart.

In 2004 Jazze Pha’s manager, Henry ‘Noonie’ Lee introduced Jeezy’s creativity to Shakir Stewart, then Vice President Artist and Repertoire (VP A&R) at Def Jam. According to Shakir, he fell in love with Jeezy’s demo and saw his talent at once. He took the demo to L.A. Reid. The experts also liked it and signed it. Interestingly, that time the musician was getting more and more popular, and other recording companies wanted to partner with him. Among them, there were Warner and Interscope. Nevertheless, Jeezy decided to work with Reid.

In his music, Young Jeezy expressed his resistance to commercialism. In 2005, Jeezy took part in the recording of several popular hip hop songs including Gucci Mane’s «Icy» and Boyz n da Hood’s «Dem Boyz.» Although, later he left the group for the sake of becoming a solo singer.

In 2006 he helped Christina Milian with the song «Say I.» The same year, his second album «The Inspiration» was released. It happened to be very successful – in the first week, its sells’ level reached 352,000 copies and was later certified Platinum by the RIAA. First collection’s single «I Luv It» got to the 14th place on the Billboard Hot 100, and the second one «Go Getta» finished 18th.

In 2007 Jeezy alongside CTE arranged charity events called Toyz N Da Hood Drive. They gifted 1000 toys for 1000 children. The CTE Christmas Kickoff portion of the event ran from 10 pm to 5 am at Club Miami. The toy giveaway took place in the Unionville neighborhood of Macon and at the Old Fourth Ward Community in Atlanta.

In September, the musician published his third album «The Recession.» It was his second first-place album. It got to the top of the Billboard 200. Jeezy sold 260 000 copies in the first week and was certified gold RIAA. Its leading single «Put On For My City» peaked at No. 12 on the Billboard Hot 100. Also, the rapper was nominated for Best Rap performance by a duo due to the song. Among the collection’s singles there also are «Vacation», «Crazy World», «My President» featuring Nas, and «Who Dat» featuring Shawty Redd.

In summer 2008, Jeezy was mixed up with a political scandal about his choice for president. So, having once mentioned he was a supporter of Barack Obama, he later said he endorsed John McCain. The world could see his explanations about the situation in a video the musician published several days later. There he said he had always supported only Obama. Jeezy and Jay-Z performed in a concert to celebrate the inauguration of President Barack Obama on January 18, 2009.

In November 2009 Jeezy started elaborating «Thug Motivation 103.» One year before, it had been said the musician had dropped «Young» from his stage name. Later, Young Jeezy denied the name change and claimed it was just a rumor. That time he released a track «Lose My Mind» which got to the 35th place on the Billboard Hot 100.

In March 2010 «Illin,» featuring Clipse, was published. There the singer mentioned Yale student Annie Le, who was murdered in 2009. Some of his fans criticized the singer for it.

On May 17, 2011, Jeezy released a single «Ballin» which succeeded to get to the 57th place on the Billboard Hot 100. In two months, he released the second single called «Shake Life.» Initially, the rapper planned to publish the album «Thug Motivation 103» on September 20 but had to postpone the date to December 20. On September 29, Jeezy pleased his fans by the second album’s single «F. A. M. E.» (Fake Ass Motherfuckers Envy). The album was released in December and debuted at No. 3 on the Billboard 200, selling 233,000 copies in its first week, becoming certified Gold by the RIAA.

In October 2012, Jeezy released a new single called «Get Right» on iTunes and sent it to the radio. That time he announced his up-coming top mixtape and a new album. So, at the end of 2012, he released «It’s Tha World.» The mixtape features 2 Chainz, Trey Songz, Lil Boosie, Birdman, YG, and E-40, Jahlil Beats, The Renegades, DJ Mustard, Warren G, Mike WiLL Made It, Cardo and Black Metaphor helped in its production.

In 2013 Young Jeezy released «Boss Yo Life Up Gang» with CTE World artists, Doughboyz Cashout и YG. On September 17, he released its first single «In My Head.»

On May 30, 2014, the rapper’s first single «Me Ok» from the fifth studio album «Seen It All: The Autobiography» was released. On July 1, Jeezy published the next track, «Seen It All.» On August 31, 2015, Jeezy announced that he would release a new project entitled «Church in These Streets.» Four singles were released, and the project as a whole came on November 13, 2015. It debuted at No. 4 on the Billboard 200.

On March 22, 2018, Jeezy announced that he would retire from rapping after releasing his final top album «Thug Motivation 104: Trust the Process.»

His current tour was launched on March 9, in North Myrtle Beach. The musician plans to visit Canada, Australia and Europe.

Jeezy’s net worth is evaluated at $15 million.

Young Jeezy was arrested and charged with a slew of horrific crimes allegedly perpetrated against his own son in September 2012.

The rapper was accused of battery, false imprisonment, and making terroristic threats against his son. Jeezy allegedly got into a fight with his son in a bathroom. The charging documents state that he threw the boy against a glass shower door, punched him, dragged him out of the restroom and began beating on him some more.

While he was choking his flesh and blood, he’s alleged to have said, «I will kill you.»

After a warrant was issued for the rapper’s arrest, when his son finally came forward with the allegations, Jeezy turned himself in to authorities on January 3. He was soon bonded out for $45,000.

This was the second legal issue to affect Jeezy that year. In April, a copyright claim was filed against the rapper over the song «Jizzle,» which was released in 2010. A songwriter named Brian Smith claimed that he wrote the song in 2008.

In 2005, the mother of Jeezy’s son (it’s not known if this is the same son from the assault dispute), Tynesha Dykes, claimed that the rapper was not fulfilling his child support payments. Dykes went to the media when she learned that her former lover was opening his home to Hurricane Katrina victims but not fulfilling his court-mandated payments.

In June 2018 the rapper began dating Jeannie Mai, a 40-year-old American TV Personality. Jeannie Camtu Mai was born on January 4, 1979, in San Jose, California, USA and educated at De Anza High; she is famous for Extra. Mai recently navigated through a high-profile divorce with Freddy Harteis. Their relationship lasted a decade and came to a bitter conclusion in 2017. In October, Mai revealed that if she could turn back time, she wouldn’t have married Harteis. Harteis has since welcomed his first child with girlfriend Linsey Toole. He showed the pregnancy six months after Mai announced their divorce.

Besides music, Jeezy once was involved in the recording of the movie Janky Promoters (2009).