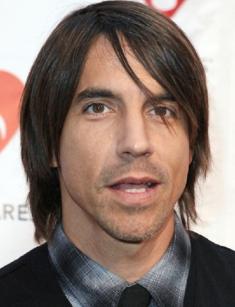 The life of one of the founders of the popular band embodies the livelihood of a real rock musician. Since childhood, his lifestyle was somewhat unconventional, full of music, creativity, drugs, women, and sometimes law issues. He, energetic and open-minded both in real life and on the stage, always pulled people and attracted women’s attention.

Besides the talent of a performer, the singer proved to be talented lyricist whose poems are known all around the world. He and the band witnessed ups and downs but they always keep all-for-one, one-for-all camaraderie, what makes the story of the band so poignant.

As a kid, Anthony hadn't a normal childhood. He was born in Michigan in the lower-middle class family. His parents split when he was three. His mother had to put much effort to give his son a good childhood. She married again in 1967, but wedlock lasted for a short period. This marriage hadn't positive effect on Anthony.

The school which he attended integrated deaf and mentally disabled kids, and Anthony was a self-appointed defender of them. Though he had high grades at school and graduated it with honors, the boy was an outsider with love/hate relationship with the world. Anthony loved his mother but was a true trouble-maker who stole sweets and used gym rings to smash his school windows.

In the 80-s, the teenager had the only hero – his father, who was an actor and drug seller. After his parent's divorce, the boy met his father during summer vacations, which he always waited with anticipation. Then he dreamt of living with his dad, Anthony's mother didn't like this idea, but finally, she surrendered.

The boy moved to his dad in Los Angeles when he was 12. Here Anthony emerged in the world of art, music, and drugs too early. . Since childhood creative people surrounded Anthony; thus, his father was a friend of Sonny Bono and Cher. He used marijuana and cocaine with his dad. At the age of 14, Kiedis accidentally tried heroine by mistake.

At High Scholl, he met Flea, who became his best friend and one of the founders of the band Red Hot Chili Peppers. He and Flea became inseparable, opening rock music and spent all the time together. When they were 15, the teenagers spent their free time jumping into swimming pools from high buildings. One day Anthony tried to jump into the pool from five-story building and broke his back. Though his back recovered, Anthony has still problems with it. After school, he was enrolled in U.C.L.A. but was dropped out in a sophomore year.

His career as a performer and vocalist started when Anthony studied at High School. He and his friend Flea joined the local band. The singer started as a hype man and later became a front man feeling that he was born to stage.

That time he took the first steps as a musician drawing inspiration from punk-funk fusion. Kiedis focused on creating friendly and peaceful music rejecting misogyny and violence of Los Angeles punk rock. Anthony, Flea and a talented guitarist Hillel Slovak found a drummer, Jack Iron, and formed the band.

They created the only one song and formed the group to perform it in a local club. After their first show at a bar, they got an offer to play one more time, but with two songs instead of one. Thanks to their successful performances and inspiration, the musicians managed to widen their repertoire and decided to change the band's name.

The band officially formed in 1983. Since that time the group was steadily gaining world fame, and the musicians were becoming favorites of public. The band sold over 80 million albums around the world, and in 2012 it was inducted into the Rock and Roll Hall of Fame. The most significant success of the group was in 1999 after the album "Californication." Top songs of the band - "Around the World," "By the Way," "Californication," "Under the Bridge" and many others - gained significant popularity and cemented RHCP in the rear with legendary rock musicians.

In the very beginning, they played in local bars and nightclubs and gained notoriety when they performed only with socks on their penises in a strip club. Kiedis offered this idea, and after this occasion, clubs began asking them to act in this manner.

As a member of the band, Kiedis made many contributions to its success. He is a lyricist, discovering intimate experience, love, loss, and suffering from drug addiction among them.

He created his unforgettable style in singing and performing on the stage. Anthony always tried to keep the group together, but the singer also had excessive drug abuse, which affected his productivity.

He entered rehabs for several times but managed to remain absolutely and permanently drug-free only in the 2000s.

In one interview, Anthony was asked about his friendship with Flea, whether it was challenging to stay good friends working together so much time. The singer said the following: "Any time two people know each other and work together and play together for as long as Flea and I have, the occasional disagreement is just an accepted part of the pie. We've been through so much together that if something were going to come between us, I think it would have happened years ago."

The talented musicians, John Frusciante, and Chad Smith enhanced the band. This membership occurred to be the best, as the group began attracting more media attention.

For his long career, Anthony's style underwent some changes. Thus, working on a new album, Kiedis wrote some lyrics and was apprehensive that the poem about his anguish and drug addiction would be too soft for the band. But he and Frusciante got much inspiration and worked on the song for several hours. Later the song "Under the Bridge" became the major hit and was included in the Billboard 100 on the second position. His early music style was based on rapping, but later he preferred more melody-driven songs.

Frusciante felt uncomfortable to be always on a public eye and unpredictably left the band. RHCP hired several guitarists, Dave Navarro among them. There was a tension between Kiedis and the guitarist, and he was fired.

The singer remembered the Nirvana icon Kurt Cobain in his autobiography as "a beloved and endearing and inoffensive in some weird way." After Cobain's suicide, the band released the song "Tearjerker" in memory of the great singer. Anthony also channeled the late Cobain in the video "Dany California" where the band remembered Nirvana's hit "Smells Like Teen Spirit."

For his long and successful career, the singer gathered a great fortune. Thus his net worth is estimated at 120 $million.

Kiedis used the stage name Cole Dammett and appeared on various T.V. shows; you can also see him in movies. He played a son of Sylvester Stallone in 'F.I.S.T.' and appeared in "After School Special" in 1978.

In 1991 he took part in movie Point Break as Tone; his partners on the screen were Keanu Reeves and Patrick Swayze.

Recent years the band remained to be highly demanded and beloved all around the world. They appeared on various T.V. shows and events. In 2016 they took part in Carpool Karaoke and sang their hits with James Gorden.

In 2018 the New York Post stated that the band is working on a new project.

In 2019 they performed with Post Malone on the Grammys. This year the Californian band made a concert in Egypt and played in front of Egypt pyramids. It was one of the most extraordinary shows of the group.

Besides, the band made one more unconventional concert, when the musicians dressed in Halloween costumes to perform at the school which Chad Smith's kids attend.

Since 2012 he has a relationship with Helena Vestergaard. He has a reputation as a major womanizer though he denied it. Anthony has an extensive list of past girlfriends who were models and actresses. He has never been married and confessed that he didn’t understand women and knew nothing about happy family life.

His autobiography "Scar Tissue" turned to be very candid, discovering his drug use, relationships, and battling with hepatitis C.

In 2007 he became a father when his ex-girlfriend gave breath to a boy, named Everly Bear. He called his son after his favorite band The Everly Brothers.

He is known as a big U.F.C. fan; he frequently has been spotted watching fights in the Octagon.

Besides a unique style, Anthony also has a bright and attractive appearance. Some people found that he looks like Iggy Pop and sometimes the singer even stroked familiar poses.

Through the years, Anthony has gone through a lot of hairstyles. He is well-shaped. Today the singer is wearing a controversial mustache. Anthony said that he was not going to get rid off them and was ready to do it only if his son asked, but the boy liked them.

The singer has a long feud with the frontman of the bands Mr.Bungle and Faith No More. For over 30 years two musicians have remained in a poor relationship. In 1987 the two groups were in a tour supporting their albums. But two years later the relationship strained when Anthony accused Patton of imitating his behavior, style, and manner of performance on the stage.

Mr. Bungle made a parody of RHCP in 1999, deliberately singing incorrect lyrics and satirizing mannerisms of the band. Patton claimed that Anthony removed his band from music festivals and screwed the career of many people from the group.