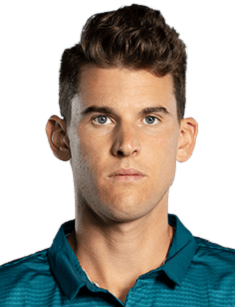 Dominic Thiem climbed the ATP ladder very fast, and he achieved to be the world's number four in November 2017. Dominic is well-known for his explosive gameplay and huge groundstrokes. He is very ambitious and has a chance of big success in tennis.

Dominic didn't attend college as he became a professional tennis player at a very young age. He started to play tennis when he was only six years old. His parents loved tennis, and whenever they would go for training, they would take him with them and teach him. The young boy began to find the sport exciting. When he was young, he had his own tennis idols: Austrian tennis players Stefan Koubek and Jurgen Melzer.

Dominic achieved heigh career stats due to his hard work and talent, but he is also thankful to his coach Günter Bresnik, who coached 27 out of 100 top tennis players. The coach veteran became his tutor when Dominic was only nine years old.

Thiem entered the ATP in 2011 and scored his first ATP victory against Thomas Muster. Three years later, at the age of 20, he reached his first ATP final in the 2014 Bet-at-home Cup Kitzbühel tournament, but in the finals, he was defeated by David Goffin.

In 2015, the sportsman managed to win his first ATP World Tour title in Nice, France, when he defeated Nick Kyrgios, Ernests Gulbis, John Isner and Leonardo Mayer in the final.

In early March 2016, Thiem participated in Austria's Davis Cup Group I first-round tie versus Portugal on indoor hard courts. The team went on to win the tie by four rubbers to one. Following the tie, he reached another milestone ranking, becoming the world number 13 on 7 March.

Thiem started the 2017 season by reaching the fourth round of the Australian Open for the first time but lost to Goffin in a rematch of their third-round match from the previous year. After falling at the quarter final stage in three of his past five tournaments, he won his first title of the year and second ATP 500 title at the Rio Open without dropping a set.

In 2019, at 2019 Wimbledon Championships, with his win over opponents Andy Murray and Karen Khachanov, he qualified for the 2019 ATP Finals. He then won his first title in Asia, the fourth title in 2019, and the 15th career title.

Speaking of his playing style, Dominic is an aggressive baseline player, who is also great at defending. Thiem is one of the few younger ATP players who use a single-handed backhand. According to the player, he changed to his single-handed backhand at the advice of his coach. The sportsman uses heavy groundstrokes to construct points and outlast his opponents.

He has had the most success on a clay court. Dominic has won many great clay-court players on clay. His mental game has also been praised, especially his tie-break win percentage.

Thiem has been dating Kristina Mladenovic since 2017. Kristina is also a professional tennis player and she was also born in 1993. Kristina's parents are from Serbia. The couple doesn’t have children yet.

Thiem speaks German and English fluently and he is currently studying French. He has a passion for football, and he even played in a charitable football match in Slovenia in November 2017. He is a fan of Chelsea FC.

The player has an Instagram profile with over 850,000 followers. Dominic posts many photos depicting him during preparations, training and tennis matches. He likes to share his victories with his fans. He also has photos with his girlfriend Kristina and close friends, with whom the sportsman spends his free time.

The sportsman has many friends and associates, including Günter Bresnik, Nicolás Massú, Stan Wawrinka, Alexander Zverev, Novak Djokovic. He is also a close friend to Diego Schwartzman. Dominic said that they sometimes play PlayStation together and meet for dinner. Once he was asked if making friends on Tour is possible, he replied that for him it is quite difficult as the thing the player wants the most - is beating your opponents on the court, but the athletes still manage to be friends sometimes.

Like other sports personalities, the player is engaged in charity work. He provided great support to La Fondation Prince Albert II de Monaco, the foundation that is dedicated to saving the environment and promoting sustainable development.

Of course, everybody is interested: how much money Dominic Thiem makes from his career earnings? His net worth equals $17 million. The player is known to earn extra money from endorsements with the big companies that are interested in sports. He is sponsored by the following companies: Adidas, Bank Austria (Member of UniCredit), KIA, Babolat, and Rolex. He advertises clothing, tennis equipment and other sports gear.

Dominic Thiem is not a controversial man, and he is often described as a modest guy. Only once he has some misunderstandings with Serena Williams, an American professional tennis player. Williams was eliminated from the third round of the French Open when she was upset in straight sets by a fellow American, Sofia Kenin. She left the court and wanted to address the press in the French Open media room. But Thiem was already in the room, talking to journalists following his win against Pablo Cuevas. To accommodate Williams, Dominic was asked to leave the room. After that, he accused her of showing "bad personality". Later, Serena admitted that she didn't want to offend the talented player when she was asked to give her version of events ahead of Wimbledon. Thiem accepted her explanations and expressed his respect for her sports achievements.