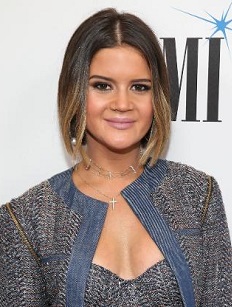 Maren Larae Morris is an American country music singer, songwriter, and record producer. She came to glory mainly after releasing her label debut albums, Hero (2016) and Girl (2019), and making collaborations with other famous artists.

Maren Morris was born in Arlington, Texas. Her parents, Greg and Kellie Morris, were the owners of the hair salon where a girl spent most of her free time. She also has a younger sister, Karsen.

Before fame, Morris displayed her talents in music, as she was always willing to sing on the family's karaoke evenings. Parents never doubted the girl’s potential.

When Maren was 12 years old, her father gifted her a guitar. Soon she mastered playing the musical instrument and began performing her songs.

Maren's music recording career started in 2005. It happened when her debut studio album, Walk On, was released. Two years later, on October 22, 2007, Smith Entertainment issued release, All That it Takes. The song Down On My Knees, co-written with Julie Bonk, gained good critics. The main theme of the song was finding the love and thanking God for it.

In 2010, Morris was attending the University of North Texas. At the same time, she made a third release, named Live Wire. A year later, she aimed to leave Texas for Nashville, as she had a great desire to pursue her career. During that period, she befriended Kacey Musgraves, an American country singer, who gave maximum support to Morris at her beginning.

In August, 2015, Maren came up with an extended play, called Maren Morris. The EP that contained five songs turned to be a big hit and became the object of attention of major labels. In September, 2015, the singer was signed to Columbia Nashville.

The EP was re-released on November 6, 2015. It included the lead single My Church, which played a major role in Maren's career.

On June 3, 2016, one more major label studio album came out. The album Hero became hugely popular and was a commercial success. It also earned Morris four Grammy Award nominations at the 59th Annual Grammy Awards. It was nominated for Best Country Album, while the song My Church entered the list of top songs and won Best Country Solo Performance.

In 2017, the singer started the Hero Tour in support of her album. A deluxe edition of Hero was released in March 2017, featuring the songs Bummin' Cigarettes, Space and Company You Keep.

In response to the 2017 Las Vegas Strip shooting, Morris released Dear Hate. The song was written and recorded along with Vince Gill, an American country singer, songwriter, and multi-instrumentalist.

In 2017, Maren was known to provide vocals on the song Craving You with Thomas Rhett. Morris was also featured on Niall Horan's song Seeing Blind, released in October 2017. Later Morris joined Niall Horan on his 2018 Flicker World Tour. She collaborated with Zedd and Grey on the song The Middle, which was issued in January, 2018. The single combined different styles: elements of country, pop, and electronic dance music.

On October 5, 2018, Morris performed as a special guest during Taylor Swift's Reputation Stadium Tour in Arlington, Texas, singing The Middle with Swift.

On December, 2018, Maren appeared on the one stage along with an American a cappella group Pentatonix to sing Christmas song called When You Believe.

Maren Morris' rise to success wasn't always smooth. She was rejected several times on the voice auditions of such famous music shows as American Idol, America Got Talent, and The Voice. But the singer didn't take the rejections to heart, and now the novice musicians cover her songs for their auditions.

In January, 2019, Morris released the lead single Girl from her upcoming second major label studio album of the same name. She also started a worldwide concert, GIRL: The World Tour. The tour has begun on March 9, in Chicago, and will end on August 23, 2019, in Canberra, Australia.

On her Twitter, Maren shared one of the upcoming events: she had a new idea to form a supergroup with Brandi Carlile and Amanda Shires named the Highwomen (in reference to The Highwaymen). It is known, that the group had already begun working with producer Dave Cobb.

In the song Girl, Morris is singing about independence, self-love, sex, and self-worth. On YouTube channel named Genius, Maren revealed the meaning of the song, commenting on the special lyrics video.

In the hit song To Hell & Back, Morris sings, honoring a partner’s desire to love fully. The song is a combination of pop and country music.

The musician goes on many tours and gives outstanding performances. Among the past tour dates, there was a sold-out show at The Bomb Factory, Dallas, Texas held on April 19, 2019. As one of her listeners noted:

“That was one of the heartfelt and honest conversations that Maren had with her audience.”

The same year, Morris and Brothers Osborne gave an emotional performance of their song All My Favorite People during the 54th ACM Awards.

The singer has also performed a show at the Wiltern in Los Angeles. She prepared a surprise for her fans: Maren invited a special guest JoJo, an American pop and R&B singer.

At present, Maren Morris is on her Girl: The World Tour. It goes across the United States, Canada, Europe, Australia, and New Zealand. Morris will have more than 40 shows, featuring Cassadee Pope, RaeLynn and other famous artists.

A superstar has confirmed a new L.A. show at the Greek Theatre that will be held on September 14, 2019.

There is also an upcoming concert at The Met, Philadelphia, featuring Maren Morris, Kassi Ashton, and Hailey Whitters. The show starts on 7 September, 2019. On November 15, 2019, Maren Morris will appear at The Rave/Eagles Club in Milwaukee, Wisconsin.

In December, 2015, Morris began dating a fellow country breakup singer Ryan Hurd. They first met during the recordings in 2013. The duo became engaged in July, 2017, and got married on March 24, 2018, in Nashville, Tennessee. The couple is not afraid of the public; they can be often seen together at various public events. For example, they have made several appearances on Red Carpet. Maren and Ryan are connected by music and are very proud to have reliable and happy relationships.

The talented beauty has an adorable appearance. Once Maren posted a photo of her and Ryan chilling at home. She was without makeup and looked perfect and natural.

Speaking of her personal style in clothes, in her everyday life the singer prefers to wear casual yoga clothes, jeans and T-shirts. As a kid, she always used to be a tomboy with ripped jeans and a leather jacket. Although she doesn't like to look typical going in public. She is petite and short, so she wears things that elongate her body.

At present, Maren is in perfect shape. However, the celebrity shared that she dropped 20 pounds before her wedding. On the photos before and after one can see the difference. But Maren spoke out on her Twitter that she didn't necessarily want to lose weight.

The net worth of the singer is estimated at $2 million.