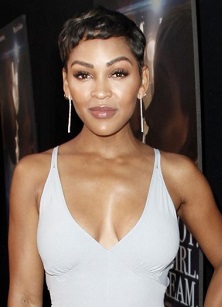 Meagan Good is an American actress who started her career from childhood. At an early age, the star began playing in various films, on TV-shows and music videos and at last came to prominence. She is mostly known for starring in horror films such as Venom (2005), One Missed Call (2008), Saw V (2008), and The Unborn(2009) and the comedy Anchorman 2: The Legend Continues (2013)

Meagan's hometown is Panorama City, Los Angeles, California – she was born there on August 8, 1981, to the family of a police officer Leondis "Leon" Good and his wife, Tyra Wardlow-Doyle. Her parents were of mixed races: her maternal grandmother is Jewish and African, her grandfather from the father's side is Cherokee, and something else and the grandmother is Puerto Rican and black. Her father himself was born in Barbados. Meagan passed her childhood in Canyon Country (now known as Santa Clarita), California with 2 brothers and a sister. She started acting at the age of 4.

When Good was young, her mother worked as her manager. At the beginning of her career, the girl served as an extra on TV shows such as Doogie Howser, M.D., and Amen. She made her first film debut at the age of 13: she took part in the 1995 comedy Friday. Although Meagan was not especially beautiful as a teen, she was self-confident and due to it had enormous strength. She was recognized after playing the troubled teen Cisely Batiste in Kasi Lemmons' 1997 film Eve's Bayou – she was nominated for several awards. One of them is NAACP Image Award nomination – the first in her career.

So, initially, Meagan Good took small roles, but at the beginning of the 2000s, she dared playing more serious, challenging characters. According to her, she succeeded to break new ground cause she played the characters younger than her. So, she acted Nina on Nickelodeon's hit show Cousin Skeeter for 3 years. Later she was invited to take part in the movies 3 Strikes and House Party 4: Down to The Last Minute.

In 2003 the actress was lucky to get the role in the action-drama Biker Boyz, and the romantic-comedy Deliver Us from Eva – it was a serious step in her career. Also, she acted Vanessa for five episodes during the third season of My Wife and Kids but was substituted by Brooklyn Sudano for unknown reasons. In 2004 Meagan got the role in the action film D.E.B.S. where worked with Jordana Brewster, Sara Foster, and Jill Ritchie. Also, the managements of the movies The Cookout and You Got Served (teen dance film) invited her to star there.

In 2005 Good took part in the recording of the horror film Venom and Brick. She worked with Bow Wow. In 2006 the actress got a leading role of Coco in Waist Deep. Also, she gave her voice to a character of the video game Scarface: The World Is Yours. The next year, Meagan starred in the dance movie Stomp the Yard as a protagonist. In 2008 the viewers of the film One Missed Call could see Meagan in the role of an unfortunate college student, Shelley Baum. Besides, she appeared in the comedy The Love Guru (her character was an angry trophy wife ), and in 2009's The Unborn with Gary Oldman and Odette Yustman.

She was part of the ensemble cast in 2012's Think Like a Man, a movie based on Steve Harvey ' s 2009 book Act like a Lady, Think like a Man. In 2012 she was invited to record in Anchorman 2: The Legend Continues. In 2013 Meagan starred in Deception.

The same period, the actress starred in many music videos: by 50 Cent, (21 Questions), Imajin, Isyss (of which Good's sister La'Myia Good is a member), Lil' Johnny, Memphis Bleek, Tyrese, and Will Smith.

Good has even become a businesswoman: alongside Marlon Oliveira and fellow actors Tamara Bass and Ty Hodges she launched Freedom Bridge Entertainment – the production company.

Good was invited to the June 30, 2013, BET Awards ceremony where she wore a vulgar royal blue dress designed by Michael Costello. The dress was strange also because Good was nominated for the BET Award for Best Gospel Artist.

Her outfit became the subject of heated debate on the Internet.

Interestingly, in an interview, the woman once noted she would never act in a film which might "disappoint God." She thinks herself to be very religious, spiritual person.

Once Meagan made an unusual haircut: faux locs – braids. The dreads suited her well, and she was invited to many photo shoots. However, the short hair suits her also.

Several years ago the actress underwent an eyebrow transplant cause earlier she had not like her appearance because of eyebrows.

In 2011, Good began dating DeVon Franklin (birthday is April 13, 1978), an executive for Columbia Pictures and Seventh-day Adventist preacher. They were colleagues working together in the film Jumping the Broom when they first met. Good admitted that she found Franklin attractive at first, but could not see him more than the guy who gave her job.

DeVon is also from San Francisco, was born to the family of Paulette and Donald Franklin. Initially, he studied mathematics but later understood he was passionate about movies and theater. He started reading books about this sphere and was inspired for working by the films The Cosby Show and The Color Purple. So, he got the degree of business administration major and a minor in cinema/television at the University of Southern California. He started his career as a motivational speaker, was invited to many shows such as The Dr. Oz Show and Dr. Phil.

Later he was hired by Overbrook as a full-time executive, then – by Metro-Goldwyn-Mayer where he worked with John Travolta. Sony Pictures Entertainment soon bought the company and DeVon was fired but found a new job – he became a Director of Development at Sony’s Columbia Pictures.

In 2014 Franklin launched his own entertainment company- Franklin Entertainment and signed a multi-year-first-look deal with 20th Century Fox. Together they recorded the film Miracles from Heaven, which was based on a book written by Christy Beam. Among its actors there were such stars as Jennifer Garner, Queen Latifah, Kylie Rogers, and Martin Henderson.

Also, Franklin tried out writing and published his own books - Produced by Faith, The Wait, The Hollywood Commandments: A Spiritual Guide to Secular Success. He always posts motivational quotes and pictures on Instagram.

Franklin and Good became engaged in April 2012 and married on June 16, 2012. The wedding took place in Triunfo Creek Winery in Malibu, California. The spouses have stated that they remained chaste in their relationship before their marriage. Now they live together in their own house in Los Angeles, California

When journalists asked Meagan to give women advice about relationship, she claimed:

"One thing I would say to all women is 'don't settle,'" she said "[Love] is out there and it does exist, and God is so much bigger and greater than what our small minds can think," she added. "What we think is impossible is absolutely possible, and I'm definitely living proof of that."

Speaking about her husband, Good described him as absolutely different from her previous men: Joseph Gordon-Levitt, 50 Cent and Tyrese.

The couple was asked how they had managed to resist their physical attraction; Franklin said he had found a woman of her life and was ready to wait. They even published a book together called The Wait: A Powerful Practice for Finding the Love of Your Life and the Life You Love.

Nowadays the couple is thinking about expanding their family and having kids, but there is no information about Meagan's pregnancy.

DeVon Franklin’s net worth is estimated to be $10 million, and Meagan Good is also $10 million.