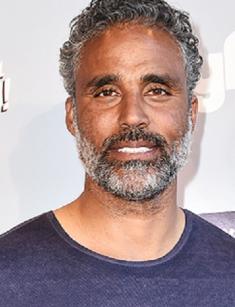 Rick Fox is a popular actor and businessman who made a prosperous career as a basketball player.

Rick Fox was born in Toronto, Ontario, Canada. He is the son of Dianne Gerace, who is a former Olympic athlete. His father's name is Ulrich Fox. Rick's younger sister, Jeanene Fox, works as a model, actress and designer.

At an early age, Fox took an interest in sports activities. His parents, especially his mother, inspired him to make a career in sport.

Rick got his education at Kingsway Academy in Nassau. During his studies, he was a member of the high school's basketball team, called the Saints.

Rick Fox had a very successful senior season. In 1987, the sportsman played for the Indiana All-Star team. Rick continued to be a part of the team at the University of North Carolina. He produced great results, leading the Tar Heels to the 1991 NCAA Final Four.

Rick's professional basketball career took off after he joined the Boston Celtics in the first round of the 1991 NBA draft. In 1992, the player succeeded to become the first rookie starter on opening night. However, Rick had to spend his first two seasons off the bench. During the 1995–1996 season, he took the position of the team's starting small forward.

In 1997, Fox signed a new contract with the Los Angeles Lakers. He scored good rating in the playoffs and continued the 1998–1999 season in a position of a backup.

The season 1999–2000 brought many victories to the team. The Lakers set the league's best record with 67 wins. In the Finals, Rick made a great contribution to the Lakers' victory. The player managed to show excellent results in the Lakers' final match. The team became the winners of the NBA title.

In the 2000–2001 season, Fox played in all 16 games in the playoffs. The Lakers had every chance to win the next four games of the series. Rick scored 20 points for the team, successfully using all three attempts. The team won their second straight championship.

In the 2001–2002 season, the sportsman appeared in all 82 games in the regular season. The season was finished with a victory, as the Lakers won their third straight NBA title.

All the statistics about Rick Fox’s sports career can be found at the website Basketball-Reference.

Apart from basketball career, Rick gained prominence as an actor. He got a bachelor's degree in Radio, Television and Motion Pictures at the University of North Carolina. In 1994, Rick made his first appearance in the film Blue Chips. In the film, he was able to show his athletic skills in the role of a basketball player.

In 1997, Rick Fox was lucky to play the main role of his early acting career. He starred in the show called Oz. His character, Jackson Vahue, was a basketball player who remained in prison on charges of sexual abuse and fought drug addiction.

In 2003, the former sportsman took part in three TV series, including the crime drama 1-800-Missing, in the series The Fairly OddParents, and television show Street Time.

In 2007, Fox starred along with his former wife Vanessa Williams in the second season of comedy-drama television series Ugly Betty. In the series he had a role of Wilhelmina Slater's bodyguard.

In 2008, the actor started to work in the show Dirt. He played a recurring role of Prince Tyrese. The same year, Rick was given a lead role in the romantic comedy-drama film Meet the Browns. His character Harry was a coach trying to court the character of Brenda played by Angela Bassett.

In 2009, Rick was offered to play himself in the comedies Party Down and Head Case.

In 2011, Fox starred in The Big Bang Theory episode called The Love Car Displacement. He played the role of Bernadette's ex-boyfriend Glenn. The same year, he appeared on the crime drama Body of Proof in the role of a suspect. Next year he played the character Andre Carson on the series Franklin & Bash, the comedy-drama television series created by Kevin Falls and Bill Chais.

In 2013, Rick acted in sports drama television series called Hit the Floor in the role of Chase Vincent.

In 2015, Fox returned on the screens to play characters that were very close to him as a former sportsman. In original series Sin City Saints he played the role of Sam Johnson, the general manager for the basketball team. He also played retired basketball player Calvin Owens on a popular TV series iZombie.

In 2016, Fox also appeared in the Showtime original series Shameless. The part of Darius Nash on the OWN series Greenleaf is one of his recent roles.

In 2019, Rick was seen in the Eric Andre's Birthday Show along with a special guest Russel Brand.

In 2015, Rick Fox became he the owner of professional League of Legends team Gravity Gaming. Later he re-branded it into Echo Fox.

Echo Fox's League team participated in several championships showing good results from 2016 till 2019, entering the top of the winners.

Echo Fox became one of the world's leading esports organizations. The company is engaged in recruiting, developing and celebrating some of the world's best professional esports athletes.

In 2016, Echo Fox signed a contract with a top North American player Julio Fuentes and Jason Sheldon Zimmerman with the nickname Mew2King. They also made collaborations with Justin Wong, Tokido, Yusuke Momochi, and many others popular gamers.

In spring, 2019, Rick Fox had a conflict with one of the main shareholders of the company, Amit Raizada. Rick made a statement to Richard Lewis of Dexerto confirming many of the details regarding the outlet’s reports on racist comments made towards himself and Echo Fox CEO Jace Hall. Rick then stated that Raizada made threats towards himself and his family. After that, he declared that he would leave the company if Raizada didn’t resign from the team.

Rick Fox is known to have two kids. He has a son, named Kyle, from the first relationship with Kari Hillsman. They started dating in 1993.

Fox was also married to American actress and singer Vanessa Williams. In September 1999, she became his wife. In May 2000, the couple had a daughter, Sasha Gabriella Fox. Vanessa had three children from previous relationships. In August 2004, after Vanessa and Rick divorced, they decided to stay close friends.

In 2006, Fox began dating actress Sharon Stone but the duo separated in 2007.

In 2007, the actress Kristin Davis was his next girlfriend, but their relationships didn't last long, and they broke up in 2008.

From October 2009 Fox dated the actress Eliza Dushku. Both looked perfect together; however, they separated in June 2014.

As of 2019, Rick Fox has an approximated net worth of $25 million, that he earned during his sports and acting career.

In late 2010, Fox participated in dance competition television series Dancing With The Stars. Cheryl Burke, a professional dancer, became Rick's partner. The duo took the sixth place. For Rick it was a new experience as a dancer, later he said that the show was a transformational journey for him.