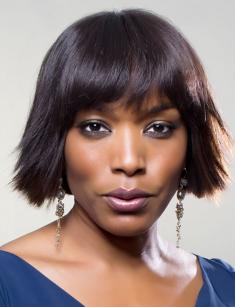 Angela Bassett is an American actress and director who has a star at the Hollywood Walk of Fame. She often participates in biopics and personifies famous black women: Tina Turner, Betty Shabazz, Rosa Parks, and Katherine Jackson. Overall, there are dozens of projects in Angela’s filmography; she also directed and produced some of them.

The would-be actress was born on August 16, 1958, in Harlem, New York. Little is known about her parents. Angela got a degree from Yale University in 1980 (African-American studies) and continued her education at Yale School of Drama to become a Master of Fine Arts.

As a student, the young woman began to play at the theater. Besides, she appeared in series and movies on local TV channels: Search for Tomorrow, Ryan's Hope, The Cosby Show, and 227.

Before the 1990s, Angela Bassett had minor and episodic roles. She worked on Thirtysomething. Kindergarten Cop, Alien Nation, Equal Justice, Family of Spies, Challenger, and so on. 1990 was fruitful for the artist: she had seven projects. The next year was even busier and brought ten movies and TV shows.

In 1992, the actress played Michael Jackson’s mother, Katherine, in the mini-series The Jacksons: An American Dream. She also got the role of Betty Shabazz, Malcolm’s wife, in the movie Malcolm X. In 1993, Bassett played another famous figure, Tina Turner, in What's Love Got to Do with It; she surpassed Whitney Houston, Vanessa Williams, and even Janet Jackson during the auditions.

The movie is considered Angela’s most successful project. The artist received the Golden Globe Award for Best Actress – Motion Picture Musical or Comedy; she was the first black actress to achieve that. Besides, Bassett was nominated for the Academy Award; the prize was given to Holly Hunter for the movie The Piano, though.

In 1994, Angela took the part of Rita Veder in Vampire in Brooklyn. The movie did not succeed despite the cast full of stars: Eddie Murphy, Allen Payne, and Kadeem Hardison.

The next year, the actress had the opportunity to collaborate with James Cameron, the creator of Titanic and Avatar: she played Lornette Mason in the fantastic action movie Strange Days.

The 1995 melodrama Waiting to Exhale was marked with Angela Bassett and Whitney Houston’s cooperation. The project shows four women and their relationships with men and each other.

How Stella Got Her Groove Back is a bright drama starring Angela Bassett. She personified the main character, Stella Payne, a successful businesswoman who completely forgot about vacation. One day, her friend decides to change it; the women travel to Jamaica together.

Four years later, the actress joined the cast of the drama Of Boys and Men. She played Rieta Cole, the mother of the family. The project also starred Robert Townsend, Victoria Rowell, and Faizon Love.

In 2008, the thriller Nothing But the Truth starring Kate Beckinsale was premiered. Angela played Bonnie Benjamin. The project failed; the director Rod Lurie was convinced that the R rating of the movie caused that.

Although critics did not appreciate the superhero movie Green Lantern, the audience welcomed it. Ryan Reynolds played Green Lantern; his wife Blake Lively personified the superhero’s girlfriend. Angela got the role of Amanda Waller.

In 2015, Angela had the chance to cooperate with the remarkable cast of the movie Olympus Has Fallen: Gerard Butler, Aaron Eckhart, and Morgan Freeman. As the story runs, some unknown criminals are going to kill all Western leaders at once.

Black Panther was another superhero movie for Bassett: she played Ramonda, Panther’s mother. The movie came out in 2018 and became one of the phase-three movies in the Marvel universe. Soon, the long-awaited movie Avengers: Infinity War was released; Angela participated there as well.

The same year, the actress appeared in the action movie Mission: Impossible – Fallout, another sequel of the popular franchise. The project grossed $791 million worldwide.

Angela met her future husband, Courtney B. Vance, when she was a university student. The couple married in 1997, 17 years after they met. They have two children: the twins Bronwyn and Slater Vance.

The spouses wrote the book Friends: A Love Story together. They discussed their works and gave some recommendations. As Angela and Courtney celebrated 20 years of their marriage, they continue to love each other as much as before, court, and go to dates. The family lives in Los Angeles.

The actress played Ramonda, the queen of the imaginary country Wakanda, in the Marvel movie Black Panther. Mission: Impossible – Fallout is another recent project; the actress personified CIA Director Erica Sloane there.

The actress tries to spend as much time with her family as she can. The woman posts pictures with her husband and kids on Instagram: they celebrate holidays, go for a walk, and hang out together. Besides, Angela is a political activist.

The woman frequently appears on red carpets and social events; she often wears monochrome dresses and nude lipsticks that make her style impeccable.