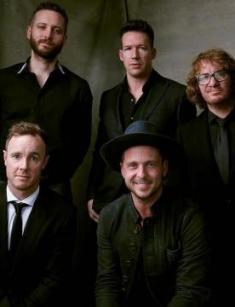 American rock-pop band OneRepublic became popular after the release of the single Apologize in 2007. Now the musicians are reaping the fruits of fame, and there was a period when the recording studio terminated the contract with the future stars unilaterally. This event happened two months before the release of the debut album. Failure was almost the cause of the break-up of the band. But the musicians managed to overcome the black stripe and become a popular band, and their songs are now on the first positions in the world charts.

In 2002, Ryan Tedder came to Los Angeles with the firm intention of making music. According to the star, he went to the city without a penny in his pocket and with considerable debt. The guy had to sell his car to buy recording equipment.

The first two years were difficult, but in this period, Ryan found musicians that became the principal members of the band. Together with Tedder, the group included guitarist Zach Filkins, the second guitarist Drew Brown, the drummer Jerrod Bettis, and the bass-player Tim Myers.

The guys, like all aspiring artists, dreamed of international fame. They thought for a long time about the band's name. The guys were looking for a simple name that everyone would understand, wherever they came.

"Initially, we were called a Republic. Even now I sometimes wish the name would stay that way. I like its simplicity. The name appeared because this word seems very strong to all of us," said Ryan Tedder, the band's leader, and vocalist when he told the story of the group.

In 2003, the musicians signed a contract with Columbia Records and started working on their debut album. The name of the team had to be changed a bit, as other teams work under the name Republic. So the band became OneRepublic.

For 2.5 years, the musicians had been recording songs for their first album. They went to the Coachella festival and came back, inspired by new ideas and with a great desire to work further.

But two months before the debut, the company unilaterally terminated the contract with OneRepublic.

"They fired us, Katy Perry and the Jonas Brothers on the same day. There are several reasons, and we don't know each of them. The main reason was the change of leadership," recalls that day Ryan.

According to Tedder, later representatives of the label apologized for the decision, calling it wrong. But then the musicians were upset by failure. They were saved by the Internet, because before that, Ryan had posted some songs online. On Myspace, OneRepublic became the most listened group that year.

The famous producer Timbaland saw something in Ryan Tedder and signed a new contract with the musicians. That is how they began working with Mosley Music Group label.

The producer rerecorded the single "Apologize" and published it in the album Timbaland Presents Shock Value. The song became popular - it remained on the top of the Billboard Pop 100 hit-parade for eight weeks and occupied the second position in the general song chart of Hot 100.

However, according to the lead singer of OneRepublic, the success of "Apologize" was not as cheerful for the band. Tedder explained that at that moment, the song turned out to be stronger than the group because its popularity was mainly due to Timbaland's name who got most of the fame. The musicians felt as if they were just an addition.

"Then we decided that with each of our performances we would prove that it was still our show," - said Ryan in an interview.

The team was finally formed in 2007. Instead of Jerrod Bettis, Eddie Fisher took place behind the drums. Another participant Tim Myers also left the group. Instead, the guitarist Brent Kutzle came to play the bass. With him, the band's sound changed, as musicians began to use the cello, which the bassist plays skillfully.

After "Apologize," the musicians were invited on television, and in 2008 OneRepublic went on tour with Maroon 5 and Brandi Carlile.

The band's first album, Dreaming Out Loud, was released in 2007 and went platinum in the United States. A former member, Jarrod Bettis, developed the cover for it. The single "Come Home" was recorded with Sara Bareilles. Tedder wrote a song in memory of a friend who served in the army outside the country, and as a tribute to American soldiers. The song "Tyrant" became the soundtrack to the drama directed by Julie Anne Robinson, The Last Song.

In 2009, OneRepublic released its second album, Waking Up, which ranked 21st in the Billboard 200 chart. In the same year, the band recorded a song with Leona Lewis "Lost Then Found," which is included in the album of the singer. The composition "Secrets" became the soundtrack of the movie Rabbit Without Ears starring Til Schweiger. The actor is a fan of the American band.

Four years later, one of the most successful records of the musicians, Native, saw the light of day. The band recorded songs for it in different countries. The group went to Paris to Philippe Zdar who helped them with their first record.

According to leader Ryan Tedder, OneRepublic has always been and remains a band that strives for diversity in sound. The quality of the music was improved with each new record.

In 2014, the team recorded the single Ordinary Human, which became a track for the film The Giver, in which viewers see the perfect world of the future. In the same year, another single came out, OneRepublic – Love Runs Out, and the director Sophie Muller shot a music video on it in the style of arthouse. The composition was used in the advertising of the series How to Get Away With Murder broadcast on ABC.

Two years later, the fourth album, Oh My My, came out. According to Tedder, it was their best work. The musicians recorded songs in different countries. The work on the album began in Poland. The song "Future Looks Good" was recorded in Rio de Janeiro and Sao Paulo, and the song "Kids" – in Japan and Mexico City.

OneRepublic worked on the album for 18 months. The recording involved such stars as Peter Gabriel, Romy Madley Croft of the British band The XX and the French duo Cassius.

After the release of Oh My, My OneRepublic stopped touring and promoting the album. The band leader Ryan Tedder wrote on the official Facebook page that the musicians were suffering from anxiety and constant travel related to concerts and album promotion. The band decided to record a new song every month, maybe every week.

In 2017, OneRepublic released four singles: "Born to Race," "Rich Love," "Truth to Power," and "No Vacancy." Two of them were recorded together with Norwegian musicians. The band performed the song "Rich Love" with the trio Seeb and the song "No Vacancy" – with the duo Stargate.

The following year, the musicians' work was again limited to singles. Three songs saw the light of day - "White Christmas," "Connection" and a soundtrack to the television series 13 Reasons Why: Season 2. The song "Connection" was ranked 1st on the Billboard Top Commercial Songs chart in July.

In 2019, the musicians released the song Bones together with the Swedish electronic Duo Galantis.

Ryan Tedder believes that the ability to release music on their own makes it much more comfortable, and fans themselves suggest what song they like. Therefore, modern musicians prefer to release mini-albums or individual singles.

For some songs, OneRepublic makes music videos, after which the interest in the work of American stars only increases. Among them are videos for songs such as "Counting Stars," "All the Right Moves," "If I Lose Myself" and others.

The band plans to record an album in 2019. The leader of the group in an interview told fans that, perhaps, even two records would be released. A world tour of the Americans is out of the question. They are determined to spend more time with families and children.

Ryan Tedder was invited to become a co-producer of a musical, which will star a popular actress. Under the contract, the musician can not reveal any details. Besides, Ryan is an executive producer of the musical show Songland. A tour in the United States and participation in festivals are planned for the near future.

Fans of OneRepublic learn news about the idols on the official website and social networks, where they post photos and videos from performances and rehearsals.