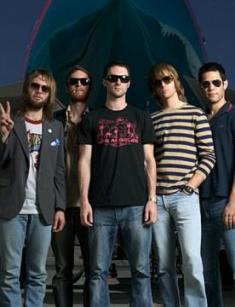 Music lovers around the world celebrated the onset of the new Millennium with the hits of new idols – the band Maroon 5. This magnificent five broke into the top lines of the charts of the oo's thanks to the mind-blowing and unknown until that time style, dubbed by critics "funk soul pop-rock." And today, many years later, the guys continue to please fans, proving – they still have something to say with their creativity.

School creative hobbies are not taken seriously, but the guys had such a responsible approach to the case that a year later they already signed a contract with Reprise Records, and immediately began to create a debut album.

In 1997 album The Fourth World was published, but all the expectations of the guys turned to ashes. The debut was a failure, despite the worthy musical sound and good reviews from critics, they managed to sell about five thousand copies of the album. The record company, not wanting to incur losses, terminated the contract.

Crushed by the failure, the musicians went different ways: despite their love for music, the guys had to continue their studies. Levine and Carmichael went to a New York College, Five Towns, to receive higher education. Here, in a multi-faceted metropolis, the guys went through a transformation of their musical tastes. The guys got interested in new directions - soul, hip-hop, R&B. They returned to their native Los Angeles having gone through a catharsis, and full of new plans to play, create, compose.

Having revived the former four-guys line-up, the members decided to make it more interesting by adding a new member, James Valentine, and changing the name. Now they were Maroon 5, and the line-up of the band looked like this: Jesse Carmichael played the keyboard, Mickey Madden – the bass, Ryan Dusick – the drums, James Valentine – the guitar and Adam Levine – was responsible for the vocals. It was 2001.

Fans have always followed not only the big creative success of the musicians but also what was happening in their lives. For example, in 2007 they experienced the quitting of drummer Ryan Dusick. Due to an old sports injury, Dusick could no longer continue playing. Matt Flynn replaced him.

In 2012, fans were stunned by the news of the quitting of another bright member of the team – James Carmichael. In the official comment of the news, it was said that the musician had taken a temporary break. The unofficial version of the same statement implied that Carmichael, as well as Levine, wanted to try his hand at solo projects.

PJ Morton replaced Carmichael and became the new keyboard player. In the same year, Adam presented to the public another new member of the band, Sam Farrar, back vocalist, guitarist and master of special musical effects. In 2014, Carmichael returned to his original team, and from then on, the group consisted of seven guys.

Especially closely, the audience followed the personal life of the frontman – Adam Levine. There was always something juicy connected to it. Fiery affair and passionate relationships joined him with such actresses as Jessica Simpson, Cameron Diaz, model Anne Vyalitsyna, Angela Bellotte, Nina Agdal.

In 2014, in the biography of the singer, there appeared a story about marriage. On 19th July the wedding of Adam and Victoria's Secret model Behati Prinsloo took place. And in 2016, the couple had a daughter, Dusty Rose. The fans perceive with delight and awe every photo of the baby with her father, posted by the singer's wife on Instagram.

The guys that had already once proven that they could work hard, this time went into a creative rage, the outcome of which, in 2002, was the album Songs about Jane. At first, music lovers could not understand this sophisticated multi-layered music that consisted mostly of the romantic theme. Two years in anticipation of success, the musicians spent touring and earning points at concerts and performances.

And only in 2004, after the dizzying success of the hits "Harder To Breathe" and "This Love," the album hit the top ten, repeatedly became platinum and entered the prestigious American chart of the Billboard 200.

From that moment on, there were hardly any failures. The guys were over their heads with the wave of success. The boys completed their check-list of achievements one after another: 2005 – they got the long-awaited Grammy in the category Best New Artist, 2006 –a Grammy for Best Vocals, as well as MTV Europe Music Awards, Billboard Magazine Awards, and many others.

Inspired by the success of the band, the members created a new album It Won't Be Soon Before Long with the title track "Makes Me Wonder," which was released in 2007 and immediately sold out a record number of copies. In the first week alone, almost 500 thousand were sold. After appreciating the next album, critics and fans immediately noted the novelty in the style, genre, and presentation of music. The leader and soloist of the group Adam Levine admitted that

In 2010, the third album Hands All Over was added to the band's discography. This time the band chose rock genre. Robert John Lange, who at some point had worked with AC/DC collaborated with the guys on this record.

However, the song "Moves Like Jagger," written in 2011 and performed by Adam Levine in a duet with Christina Aguilera became even more popular than the starting single of the album Misery. A single hit – became one of the leaders in Billboard charts and later was included in the already reissued third album.

Adam Levin, the frontman, called the fourth album Overexposed "the most diverse and pop." Fans of the band listened to it non-stop in 2012. The composition of the album included the hits "One More Night," "Payphone" and more.

The fifth album had a short title, V. To work on it, the Californians attracted well-known musicians, in particular, Gwen Stefani to record the single "My Heart Is Open." The guys had to remember what it felt like to receive criticism. The columnists of The Guardian and The Observer called the style of V "tasteless." However, the first released single of the album – "Animals" – immediately got the third place of Billboard.

Today, the musicians are enjoying the success of the 6th album Red Pill Blues. It was released in 2017. The cover of the CD was decorated with photos of participants filtered by Snapchat photo app. With this "trick" the team shot a music video for the song "Wait."

And in May 2018, fans were pleased with the new video for the song "Girls Like You," filmed by the group together with singer Cardi B. The video features singers and actresses Jennifer Lopez, Gal Gadot, Rita Ora and others.