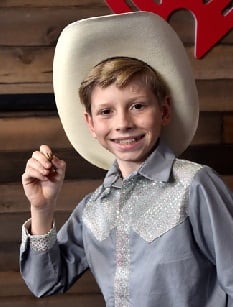 Mason Ramsey is a young American singer and social media personality. The boy came to prominence after his ‘The Walmart Yodeling Boy’ video went viral. The musician signed a contract with Big Loud Records in 2018. He has charted with his debut track "Famous".

Having found the passion of his life – music – in the very infancy, nowadays Mason Ramsey is one of the most successful children-celebrities. Let’s know something new about Mason Ramsey!

Mason Ramsey’s birthplace is Illinois, the United States. He was born there on November 16, 2006. At a very early age, he came to live with his paternal grandparents, Ernest M. Ramsey and Frances Ramsey in Golconda, Illinois. Mason has an elder sister.

According to Mason’s grandfather, the boy started singing ever prior to talking. As a kid, Mason liked spending time in the basement with Ernest listening to the songs of Hank Williams Sr., who is his favorite singer. The first song Mason Ramsey sang was Williams Sr.’s ‘Long Gone Lonesome Blues.’ As a 4-year-old boy, Ramsey performed for Josh Turner at the Carson Center. One year later, he was opened for Gene Watson. At the age of 6, the musician started taking guitar lessons. Having turned 7, Ramsey performed with Kenny Rogers on a Christmas TV Show.

So, Mason Ramsey began building a successful music career from the very infancy. On January 15, the singer advanced to the top of the 27th Annual Kentucky Opry Talent Search (beginner division) after performing Williams Sr.’s ‘Your Cheatin’ Heart.’

In January 2017 the celebrity published one more video - he was seen sitting in a Walmart shopping cart and performing Williams Sr.’s ‘Hey Good Lookin’’. A Clarksville, Tennessee-based radio station named Beaver 100.3 FM found Mason and asked him to sing the song for their listeners. Ramsey agreed and performed with his guitar.

On March 24, 2018, Ramsey performed singing ‘Lovesick Blues’ in front of air mattresses at a Walmart store in Harrisburg, Illinois to shoot a video. The project was later published on YouTube and Twitter, garnering several million views within a few days.

Twitter users especially liked this young talented boy looking positively dapper in a bow-tie and cowboy boots. He tapped his feet and yodeled his heart out – it brought him fans from all over the world. Also, his performance has evoked lots of memes. Other artists have made remixes of the single, which have become popular in their own right. Ramsey's performance sparked new interest in Hank Williams' 70-year-old recording of the song and in March Rolling Stone reported that Spotify's Viral 50 chart for the U.S. ranked Hank Williams' ‘Lovesick Blues’ at number three, and number four around the globe.

On April 10, 2018, the celebrity appeared on NBC’s The Ellen DeGeneres Show answering interview questions and performing ‘Lovesick Blues.’ In his admissions, Mason Ramsey said his dream was to perform at the Grand Ole Opry. At the end of the show, Ellen informed him that he would be able to do it on April 14. She also organized a concert for him at the Harrisburg Walmart. It was broadcast live on Walmart’s Facebook page.

On April 13, the musician performed at Coachella Festival. Several days later he performed alongside DJ Whethan at the prestigious and popular event hosted annually in Empire Polo Club in Indio, California. He also was lucky to meet Justin Bieber.

In late April, he signed a record contract with Atlantic Records and Nashville-based label Big Loud. Musician’s debut single ‘Famous’ debuted at number 62 on the US Billboard Hot 100, while the EP got to the top 10 of Billboard's Heatseekers Albums chart at No. 7. Mason Ramsey performed iconic No. 1 songs on Billboard Hot 100 chart's 60th anniversary, starting from the 1960s, he sang hit songs by Mariah Carey, Billy Joel, Paul McCartney, Stevie Wonder, Celine Dion, The Monkees, The Jackson 5, Whitney Houston, Beyonce, and Adele.

In March 2019, Mason Ramsey embarked on ‘How’s Your Family Tour.’ He has toured around the United States, including Atlanta, Boston, Chicago.

Mason Ramsey’s net worth is estimated at $1 million.

As for Ramsey’s relationship, he is too young for having a girlfriend.

Apart from singing, Mason Ramsey has another hobby – playing basketball.