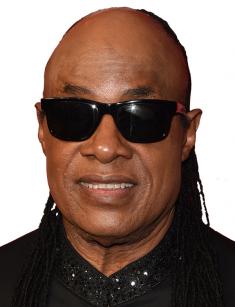 Stevie Wonder is an American musician who has been blind from birth. He is the founder of the classic soul and R’n’B styles, four-octave singer, multi-instrumentalist, composer, producer, and 25-time Grammy laureate.

The would-be celebrity was born on May 13, 1950, in Saginaw, Michigan. Stevland Hardaway Morris was the third among six children in the family. He was a premature baby, and medics had to put the child in a special incubator. When doctors miscalculated the oxygen level there, Stevie’s weak eyesight deteriorated.

Stevie’s mother, Lula Mae Hardaway, moved past her son’s disorder and helped him adapt to the external world. The boy learned how to walk on his own and read by touch.

In 1954, the woman married her second husband and moved to Detroit with the children from the first marriage; she got the new second name, Morris. When the boy was nine, he received a harmonica as a present; soon, the family purchased a piano, and Stevie quickly picked up the music he knew: Ray Charles and Sam Cooke. In addition, Wonder sang in a church choir.

One day, Gerald White, the brother of Robbie White from The Miracles, noticed the teenager during a Sunday service; he invited the young talent for the auditions. Soon, Stevie made acquaintance with the Motown Records founder Berry Gordy. The producer gave the boy the stage name Little Stevie Wonder and signed a contract with him; the musician went touring for four months and gave 94 concerts with Motown artists.

At 11, Stevie recorded the first hit “I Call It Pretty Music, But the Old People Call It the Blues” under Clarence Paul’s supervision. The next year brought the first album, The Jazz Soul of Little Stevie and the singles “Little Water Boy” and “Contract on Love”. As the boy began to participate in concerts, he neglected his school studies; however, he had to receive his school certificate and took the intensive studies for blind people.

In a while, 13-year-old Stevie grabbed people’s attention by the new hit “Fingertips” with Marvin Gaye; the song immediately topped pop and R'n'B charts. The same year, the concert album Little Stevie Wonder the 12 Year Genius. Recorded Live came out.

In 1964, the movie Muscle Beach Party starring Stevie Wonder was premiered. The next year, the artist appeared in the sequel of the franchise, Bikini Beach. Apart from acting, Wonder presented several singles: “Pretty Little Angel”, "Castles in the Sand”, “Hey Harmonica Man”, “Happy Street”, and the album Stevie at the Beach that included the songs from movies. Smokey Robinson’s hit “Tears of a Clown” created by Stevie as he worked for Motown reached the first positions in music charts.

In 1971, the artist created the first conceptual R&B album Where I’m Coming From. It was different from the previous works: the author’s style had no sentimental character. The singer wrote and arranged all the songs and produced the album.

When the release took place, Stevie’s first contract with Motown expired. The president of the company Berry Gordy revised the relationship with the label’s leading star and signed the second agreement with Wonder: the singer was awarded the total freedom of art. The musician did not have to think about finances and focused on conceptual projects. 1972 brought two albums: Music Of My Mind and Talking Book; their sounding bore some resemblance to rock music.

Stevie Wonder used many instruments including the keyboard. The man used the voice-over technique and could perform all vocal parties by himself. Stevie’s new lyrics included not only romantic plots but also mysterious, political, and social themes.

In 2003, Music Of My Mind and Talking Book got number 284 and 90 in Rolling Stone’s 500 Greatest Albums of All Time. Two songs from the latter album gained three Grammy Awards. At this period, the musician began to collaborate with the group Rolling Stones and had an international tour with them.

The 1973 collection Innervisions was a three-time Grammy laureate including the Album of the Year category; it was named the best album of the musician’s classic period. Ray Charles, Tina Turner, Barbra Streisand, Eric Clapton, Red Hot Chili Peppers, and others recorded cover versions of these songs.

The album released happened at the same time with Stevie Wonder’s car crash. The singer was in the coma for a week and lost his sense of smell. As soon as the man recovered, he continued to create new songs. The next year, the artist recorded Fulfillingness' First Finale that stood out for its self-centration. This work brought Wonder four Grammys.

In 1976, Songs In The Key Of Life was presented; it topped Billboard 200 and became the bestselling work in the composer’s career. In the 1980s, he created three new albums: Hotter than July, In Square Circle, and Characters. Stevie cooperated with many celebrities: Paul McCartney, Michael Jackson, Elton John, Julio Iglesias. The first music videos came out: “Lately”, “Happy Birthday”, “That Girl”, “I Just Called to Say I Love You”, “Love Light in Flight”, “I Wish”, “You Will Know”, “Free”, “Superstition”, and “Funday”.

1987 was marked with Sting’s hit “Fragile”: it was presented after the scandalous murder of Ben Linder who worked at a hydropower plant in South Africa; the Contras group supported by the American government did that in Nicaragua. While the release was unnoticed at that period, the song was reborn in 2001, after the tragedy on September 11 when Stevie Wonder joined Sting. The YouTube video of the stars’ concert had more than 5,6 million views.

The artist’s reeditions with best compositions regularly appear on the market. In 2007, Stevie Wonder announced a grand tour A Wonder Summer’s Night in the USA: it was held in memory of the man’s mother who had passed away the year before. All the money was given to charity.

In 2007, Wonder also visited the New Wave music contest in Jūrmala, Latvia. The next year, he gave a large show in London; it was released on DVD later.

Stevie Wonder has always been popular among women, and he liked them, too. He married his first wife, a Motown employee Syreeta Wright, in 1970; the woman became a co-creator of Wonder’s first independent album. The couple spent a year together.

The musician lived with Yolanda Simmons in a consensual union for a long time. She gave birth to Stevie’s two kids. When they split up, the artist began to date singer Melody McCulley, the mother of his third child.

In 2001, the composer married Kai Millard; they had two children together. The next girlfriend, the model Tomeeka Bracy, gave the man two daughters. Rumors have it Wonder has two more children from an unknown woman.

The artist is going to celebrate his 69th birthday in 2019.

The closed wedding ceremony took place on June 17, 2017, in Jamaica. The musician’s children and friends were supposed to gather together, but the details are unknown.