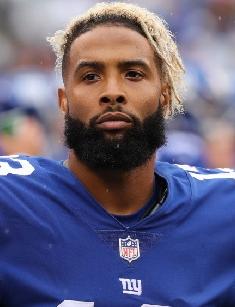 Odell Beckham Jr. is an American footballer, currently performing for the Cleveland Browns on a wide receiver position under No. 13 on his jersey. Earlier, the sportsman player for the New York Giants team of the National Football League.

Odell Cornelious Beckham Jr.’s birthplace is Baton Rouge, Louisiana, USA – he was born there on November 5, 1992, to the family of Heather Van Norman and Odell Beckham Sr. As for his parents, they were successful athletes back in their time like his stepdad Derek Mills. Odell Jr. has two younger siblings – a brother Kordell and a sister Jasmine.

Speaking about Odell Beckham’s education, he studied at Isidore Newman High school in New Orleans. However, he didn’t attend the school too often – from an early age, he became interested in sport and preferred to spend time on the basketball court and track.

So, young Odell was encouraged to build a sports career by his parents. His dad was at LSU, where he played running back while his mom, also at LSU was a famed track runner. In his admissions, Odell has mentioned that as a kid, he was quite athletic and his parents brought him up in a ‘sporty manner’ and that is precisely where he got his thunderous self-confidence from.

Odell Beckham’s basketball career started when he studied at the college. He was a student of the Louisiana State University where joined its football team. Being a freshman, Beckham showed his abilities – the season was closed with two touchdowns, and 41 receptions for 475 yards and earned himself a freshman all-SEC selection.

As a sophomore, the sportsman was lucky to start 12 of 13 total matches. In 2013, in his junior year, Beckham formed perfect wide receiver duo along with Jarvis Landry. The pair is still termed as one of the best catches in the history of major college league in the United States.

That year the player also was honored with the Paul Hornung award – the title which is given annually to the best player in the major college football league. Totally, the season was closed with thrilling 57 receptions and eight touchdowns. He led the SEC with 32 kickoff returns for 845 net yards that time.

After the season, Beckham decided to drop out of college and applied for participation in the NBA draft.

Odell Beckham was selected by the New York Giants. On May 19, 2014, the sportsman was signed to the franchise.

However, initially, the player could join the team. He suffered a hamstring injury which made him miss a majority of the training camp, preseason, and the first four matches of the season. He debuted on October 5, 2014 – his team faced the Atlanta Falcons, and the sportsman scored four receptions for 44 yards and a touchdown. Having faced the Indianapolis Colts in his Monday Night Football, Beckham registered eight passes for 156 yards.

Later the Giants fought against the Seattle Seahawks in Week 10 – Beckham made seven passes for 108 yards. On November 23, 2014, playing against the Dallas Cowboys on Sunday Night Football, Beckham registered ten catches for 146 yards and two touchdowns, including a one-handed touchdown reception hailed as the "catch of the year." Cris Collinsworth, Tony Dungy, Victor Cruz, and LeBron James called it one of the best catches ever.

Odell carried on with his form in the remaining matches and achieved celebrity status among the sports fans (interestingly, Michael Jordan, an actor, is the big team’s fan). He was at the ultimate high during the regular season finale match against Philadelphia Eagles where he recorded 185 receiving yards, a career high stats for him and set the record for any rookie player performing this way in the history of the franchise.

Playing there, Odell Beckham registered nine receptions for 142 yards and a touchdown. Later, having faced the New York Jets, he made six receptions for 149 yards and a touchdown. Fighting against the Miami Dolphins in Week 14, Odell Beckham scored a season-high 166 yards receiving and two touchdowns. During the Week 15 match against the Carolina Panthers, Odell was mixed up with a scandal with cornerback Josh Norman, and he was suspended.

So, having taken part in 15 games, Odell Beckham scored in total 1,450 receiving yards and 13 touchdowns. He was a Pro Bowl selection for the second year in a row and finished 10th on the NFL Top 100 Players of 2016

In 2016 Beckham started training with a new head coach, Ben McAdoo, cause the previous one Tom Coughlin resigned. On September 17, having defeated the Cowboys, Odell Beckham celebrated the victory through dancing and was fined $12,154 for it. In Week 3, playing against the Redskins, Beckham made 121 receiving yards but failed to help his team win. Week 6 was marked by the 27-23 winning match against the Baltimore Ravens – there Beckham scored eight passes for a career-high 222 yards. In total, that season the sportsman started all 16 games and registered a career-high 101 receptions, 1,367 receiving yards, and ten touchdowns. The season was closed 11-5 for the Giants. They advanced to the playoffs for the first time in 5 years but were beaten 13-38 by the Green Bay Packers. The sportsman finished 8th on the NFL Top 100 Players of 2017.

In the first week of the season 2017, Beckham injured his knee and returned next week to the match against the Detroit Lions, making 36 receiving yards. The next game which was against the Philadelphia Eagles, the sportsman scored 79 receiving yards and two receiving touchdowns. In Week 5, fighting against the Los Angeles Chargers, Beckham made 97 receiving yards and a touchdown until leaving the game with an apparent leg injury. The doctors stated it was a fractured left ankle and Beckham had to undergo surgery.

In Week 10, the Giants faced the San Francisco 49ers. Beckham registered four catches for 73 yards and two touchdowns and led the team to the 27-23 win. In Week 13, fighting 13 against the Chicago Bears, Beckham had three catches for 35 yards and a touchdown. The player suffered a quad injury and missed final four matches. He finished the season with 77 receptions, 1,052 yards, six touchdowns, and threw two passes for touchdowns.

On March 13, 2019, Beckham was traded to the Cleveland Browns in exchange for Jabrill Peppers and the Browns' first round (17th overall, Dexter Lawrence) and their second third-round pick (95th overall, Oshane Ximines). There he alongside Baker Mayfield.

Nowadays Beckham is thinking about becoming a free agent, according to his words in an interview.

Odell Beckham’s net worth is evaluated at $25 million.

Odell Beckham is a public personality. He doesn’t keep his personal life in secret. Currently he is single. Earlier he has been in a relationship with Polyxeni Ferfeli, a model and fashion designer, Khloe Kardashian, reality TV star - they both were seen together in numerous events holding hands.

He has also been romantically linked with the girlfriends Amber Rose, Lauren Wood and Zendaya.

During a 2015 interview, hall of fame receiver Michael Irvin noted that Beckham is subject to homophobic rumors.

The sportsman has near 40 tattoos all over his body.

In 2019 Beckham attended the ESPYs.