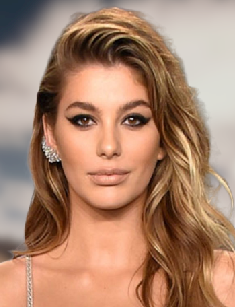 Camila Rebeca Morrone is an American actress and model who is famous also because of people around her. Al Pacino is her stepfather, and Leo DiCaprio is her boyfriend. Camila was the face of Vogue and appeared in some movies, including Bukowski (2013) and Death Wish (2018).

Camila Morrone was born in Argentina in 1997. Her parents are Lucila Polak, an actress, and Máximo Morrone, a model. The spouses divorced in 2006, and since 2009, Camila's mother has been dating a famous actor, Al Pacino, so Camila considers him as her stepfather. Morrone also has a younger brother, Sky.

Speaking about Camila's education, she graduated from Beverly Hills High School. As a child, she used to play volleyball and soccer.

Morrone's modeling career started with signing a contract with the IMG Model Agency and LA Model Management. In 2016, she was on the cover page of Vogue Turkey. Camila's first runaway experience took place at the Moschino's 2017 resort collection.

Camila works with a lot of brands like Victoria Secret, Urban Outfitters, Moschino, Sephora, etc. Besides, she has an Instagram blog, with more than 1 million followers.

In 2012, Morrone made her acting debut in James Franco's documentary My Own Private River dedicated to Joaquin Phoenix. Next year, she worked with Franco again and starred in his film Bukowski. In 2018, the young actress appeared in the Death Wish together with Bruce Willis. Also that year, she starred in Never Goin' Back, a debut of Augustine Frizzell.

For 2019, Morrone has a net worth of ‎$2 million, which is rather great for such a young celebrity.

Speaking about Camila's love life, she was in relationships with Joseph Perez in 2013–2016 and Fai Kahara in 2016–2017. For now, the young model is dating Leonardo DiCaprio who, by the way, is a good friend to her stepfather.

Camila has a best friend, Hailey Baldwin, a model and a wife of the singer Justin Bieber. Two friends are often seen partying together or relaxing on the beach.