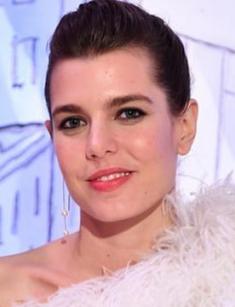 The Monegasque rider, journalist and entrepreneur Charlotte Casiraghi became known for her noble ancestry and belonging to the princely family of the rulers of the small state of Monaco.

Her mother, Caroline, Princess of Hanover, is the eldest child of Prince Rainier III and the Hollywood star Grace Kelly, and her father, Stefano Casiraghi, is the representative of the social elite of Italy and a famous racer who competed in speedboats. With such a legacy, Charlotte is under the scrutiny of the press, which seeks information about the public and private life of the charming and talented uncrowned Princess.

Charlotte Marie Pomeline Casiraghi was born on August 3, 1986, in a small and prosperous state of Monaco. Her father, who became the second and beloved husband of the daughter of Prince Rainier III Caroline, Princess of Hanover, was a native of the Italian province of Fino Mornasco and belonged to a family of wealthy businessmen.

When Charlotte was four years old and her brothers Andrea and Pierre, were six and three years old, Stefano died in a crash, turning over on a 42-foot catamaran Casiraghi. The mother, remaining with her three children, left their homeland and hid from prying journalists in the South of France, in the small town of Saint-rémy-de-Provence.

In the estate, located in the lap of nature, the granddaughter of Grace Kelly did not suffer from a lack of attention from parents and almost did not communicate with Caroline and her third husband Ernst August, Prince of Hanover. Preferring the company of her aunt, Stephanie, the girl was happy to listen to stories about social life and dreamed of traveling, clothes, and her own pony.

Charlotte still remembers August 3 of the year 1998 as the day that the main miracle of her childhood happened. On this day, she received a gift horse, Emilia, realized that her life would be connected with riding and started attending Jumping school. This noble and dangerous sport fascinated Charlotte so much that she began to take lessons from professional riders, Philippe and Thierry Rozier and participate in competitions among Amateurs and Juniors.

During the years of studying at the Lycée François-Couperin, Fontainebleau and then at the University of Paris IV: Paris-Sorbonne, the training faded into the background, and the main goal for her was to receive higher education and have the opportunity to train in the companies of European capitals. But after obtaining the degree and getting her diploma, she returned to the stables and went back to horse-riding lessons.

The 11th heir to the princely throne of Monaco got her first job in 2010, taking the post of honorary President of the Global Champions Tour and Chairman of the Federation of Show Jumping of Monte Carlo administrative center.

At the same time, after several interviews and public speeches, the beautiful girl with an athlete constitution and a height of 5 feet 57 inches, weighing 123 pounds, was invited to represent the interests of the famous Italian brand and sometimes appear in advertising campaigns of Gucci fashion house. Considering it as a compliment, Charlotte agreed, and since then, creative directors and designers closely monitor the style of Princess and provide equipment for horse-riding competitions.

Besides, the young Casiraghi performed a public duty of the representative of the Royal family and took part in charity work and the annual parade and Ball of Roses. With her help, The Princess Grace Foundation raised funds to support young talents, and the organization Fxb France arranged events to combat poverty and AIDS.

In 2009 and 2011 Charlotte, along with her uncle, Albert II, attended the races Formula One and handed out prizes to the best pilots of the stage, Jenson Button, Sebastian Vettel, Fernando Alonso, Kimi Räikkönen and Rubens Barrichello.

At the same time, the heiress tried her hand at journalism and became the editor of Above magazine. In the course of her work, she made friends with Paul McCartney's daughter, Stella, and organized a joint free print publication, Ever Manifesto. In the first batch, which consisted of 3,000 copies, the girls published materials on the interaction of fashion and the environment, which received feedback from representatives of the secular and creative world community.

In 2015, Charlotte took a new initiative and founded Les Rencontres Philosophiques de Monaco ("Philosophical Encounters") with the participation of modern thinkers and authors of advanced literature. Soon after, she wrote a Preface to the book by the French psychoanalyst Julia Kristeva and published her own correspondence with the editor and academician Robert Maggiori.

As a representative of the famous Monegasque rulers' family, Charlotte Casiraghi often appears at public events, balls and fashion shows. Journalists constantly publish pictures of her and, in addition to dresses and hairstyles, have heated discussions about her new alleged husbands and boyfriends.

In 2011, the subject of attention of the press was comedian Gad Elmaleh, who "gave" the Princess a son, Raphaël and disappeared in an unknown direction.

After that, Casiraghi went out with Italian filmmaker Lamberto Sanfelice and Hollywood actor Brad Pitt, but the relationships were limited to the joint appearance on the beaches, wearing bathing suits, and dinners at expensive private restaurants.

In the late 2010s, Charlotte met producer Dmitry Rassam, the former husband of Russian model Masha Novoselova. The young people fell in love and decided to spend the rest of their days together.

However, for some time before making their relationship official, Casiraghi became pregnant and gave birth to a second son, named Balthazar Rassam.

In 2019, at the insistence of her uncle, Albert II, the couple decided to make their love official, and the press wrote headlines that Princess Charlotte got married.

Charlotte Casiraghi has a net worth of $30 million.

Now, the wedding of Charlotte Casiraghi and Dmitry Rassam which took place on June 1, 2019, is the subject of discussions of reporters and journalists. Even though the couple wanted to celebrate in private, the ceremony, held in the princely palace of Monaco, did not go through without a few cameramen and photographers.

The photographs of the Princess appearing in a low-cut wedding dress with the hairstyle of Grace Kelly was published on Instagram of the owner of a famous Galerie, Pierre Passebon. The images immediately went viral and got printed in popular publications.