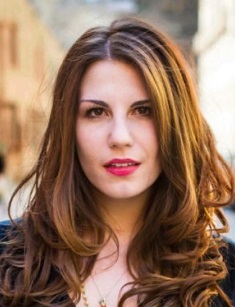 Lauren Duca is an American freelance journalist, gaining immense popularity. Lauren is also a feminist and political columnist. She is the author a book about young people and the future of American politics titled How to Start a Revolution, that came out in September 2019.

Duca was born in New York City, the U.S. The parents of the writer live in New Jersey. She was not the only child in the family; she has a younger brother.

In 2013, Duca got an education at Fordham University, where she studied English and Philosophy. At this time she tried out being an editor in chief of the alternative newspaper. In 2015, she continued her studies and was given a Master's degree as a journalist.

Lauren Duca started her career in 2013, when she began working as an online editorial intern for the magazine New York. Then she changed the position and worked as a reporter at The Huffington Post from 2013 to 2015. Anna Merlan, a famous reporter, made a post on Twitter sharing her thoughts on a story about Lauren Duca and accusations that she left the Huffington Post after being accused of sending cruel emails to coworkers. This post was rapidly spread on the Internet and received many comments.

In 2015, Lauren began working for Teen Vogueas as a freelance reporter.

In December 2016, the journalist became highly popular after writing an article in Teen Vogue titled "Donald Trump is Gaslighting America." In December, 2016, the report was called the magazine's most-viewed post. The paper changed the fashion magazine's reputation because it was mainly about politics.

After the sensational article Lauren appeared on Tucker Carlson Tonight. There was a joke: if you first heard of Duca, you think of a young woman who called Tucker Carlson “a sexist pig.” During the meeting, Carlson and Duca talked about Duca's commentary on Ivanka Trump. Lauren criticized host Tucker Carlson for not allowing her to speak. He wasn't silent and told her in response that instead of political commentary, she "should stick to the thigh-high boots." After that, Lauren faced harassment on the Internet, including threats of sexual assault.

Duca decided to make a response action and wrote her new column at Teen Vogue "Thigh-High Politics." In 2017, Lauren started to release t-shirts with the printed phrase "I like my politics thigh-high." More than that, the journalist donated one hundred percent from each sale to Planned Parenthood in Tucker Carlson's name. By this action, Lauren wanted to show her attitude toward critics who think that young women should not participate in politics.

The same year Lauren had some hassle with the former pharmaceutical executive Martin Shkreli. He edited a collage of Duca for his Twitter banner and then invited her to Donald Trump’s inauguration with the ridiculous caption. Lauren could not stand it and asked the platform’s founder and CEO of Twitter to take actions toward Shkreli.

In 2018 the journalist expressed her thoughts on Billy Graham's death, tweeting some swear words on her page. Her post received negative feedback on the Internet. As a feminist, she explained that it was inappropriate for Graham to call gays "a sinister form of perversion". She also was an opponent of his speech about AIDS.

In 2019, Duca taught a six-week course at New York University, entitled “The Feminist Journalist.” The class, made up of high school and college students, was focused on intersections of feminist ideology and the practice of journalism.

In September 2019, Duca released her first book: How to Start a Revolution: Young People and the Future of American Politics.

Daily Wire Editor-in-Chief Ben Shapiro invited feminist writer onto his radio program to debate comments the conservative made about women's soccer star player Megan Rapinoe. In the interview with Shapiro, she spoke out her attitude towards the famous football player Megan Rapinoe. It seemed that Shapiro and Duca agreed that Rapinoe was getting sponsorships in part for her political LGBT activism.

Lauren also took part in discussions of Aziz Ansari, an actor who was accused of sexual misconduct. An overwhelming number of people came to the defense of Ansari. Lauren declared that she found this situation abnormal. She offered people to think about how many women fake periods and drunkenness not to infuriate their sexual abuser.

Lauren Duca also appeared as a rumourmonger for spreading discussions about Superman actor Henry Cavill. She wrote that he made 46 times more than Wonder Woman actress Gal Gadot. The magazine Elle published an article titled, "Superman got paid more than Wonder Woman." Later it turned out, the whole story was untrue, and Lauren deleted her tweet.

Duca lives in Brooklyn with her pet Shiba Inu, Demi. She was married to her long-time boyfriend Kris Fleming in 2016. They met each other in college. However, in January, 2019, Lauren shared a post on her Twitter profile, about getting divorced with her husband. Later there was information that Duca was dating a woman.

Lauren has a Twitter account (@laurenduca) with almost 450,000 readers. She is becoming popular on Instagram (@duca.lauren). As for now, she has over 6500 followers. The latest posts of the journalist are about her new book. She also likes to share funny moments; some of her photos are very provocative and cause mixed reaction from the audience.

The net worth of the popular activist is estimated at approximately $500,000.